Who are the main candidates for PM in Kosovo's October 6 election? 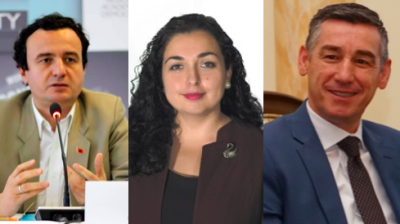 By Valentina Dimitrievska in Skopje October 3, 2019

Kosovo is set to elect members of the new parliament in a snap vote on October 6, seen as one of the most uncertain elections since the former Serbian province declared independence 11 years ago.

Opinion polls suggest that no party will emerge as a clear winner to form a government, predicting prolonged coalition talks as was the case after the previous election in 2017.

According to Slovenia-based think tank IFIMES, Kosovan voters are favouring opposition parties in the upcoming election due to their dissatisfaction with the current coalition of the Democratic Party of Kosovo (PDK), the Alliance for the Future of Kosovo (AAK), the Social Democratic Initiative for Kosovo (NISMA) and the New Kosovo Alliance (AKR).

According to voters, the new government should address the widespread corruption, high jobless rate and to improve relations with neighbouring Serbia, which worsened after Prime Minister Ramush Haradinaj imposed 100% tariffs on Serbian imports.

The main race in the October 6 election is expected to be between the opposition centre-right Democratic League of Kosovo (LDK) and nationalist Vetevendosje (Self-Determination), as well as the governing PDK that has dominated Kosovo's political life for years.

Vetevendosje has been in opposition for the last 10 years and was known for its radical views, but as the years go by the party’s rhetoric has become milder.

Vetevendosje leader Albin Kurti is seen as the favourite candidate for prime minister by some margin, followed by Vjosa Osmani from the LDK, Kadri Veseli from the PDK, Haradinaj from the Alliance for the Future of Kosovo and Fatmir Limaj from Nisma.

44-year-old Kurti started his political activities as a student in Pristina in 1997. He organised peaceful protests to force out the Serbian authorities which occupied the university buildings. He was arrested by Serbian forces in April 1999 and released in April 2003.

Kurti has been a member of parliament for three consecutive terms. He was arrested for tear gas attacks in the parliament in 2015 and 2016.

Economic development of the country, education, health, social issues, the rule of law and fighting against nepotism are priorities for Kurti. He has promised a radical reduction of the number of ministries to 12 from the current 21 and the halt of privatisation plans.

Vjosa Osmani, 37, believes she can rise above Kosovo's “nasty” politics and become the country’s first female prime minister, not least by taking a lot of female votes.

“We will give power to freedom and embrace the values of democracy,” she said in the latest speech on October 3, urging young people to vote.

In his campaign, Veseli underlined his orientation is towards strengthening the independent and sovereign state of Kosovo. He promised support for young people, farmers and entrepreneurs and also an 80% increase in pensions.

While the polls favour the opposition parties, the PDK has managed to hold onto power after previous elections by striking strategic coalition deals.

Meanwhile, two years into his second term as prime minister, Haradinaj is seen as having only an outside chance of returning to the post after the election. The 51-year old is a former officer and leader of the KLA. He served as prime minister since 2017 and prior to that between 2004 and 2005.

The snap vote was announced after Haradinaj resigned in July to appear for questioning at the Hague-based court investigating war crimes against Serbs during the Kosovan war of independence in 1998-1999.

Analysts say that some Kosovan leaders, such as Haradinaj, promote a very risky agenda as he is building his campaign on the “100% state” inspired by the 100% tariffs his government has imposed on Serbia and Bosnia & Herzegovina.

Voters will elect 120 members of the parliament, of which 20 seats are reserved for representatives of minority communities including 10 seats for the ethnic Serbs.

Voting is proportional. The electoral threshold for a party to enter parliament is 5%.

Ambassadors of France, Germany, Italy, the UK and the US in Pristina recently urged the Kosovan authorities to organise free and democratic elections and to avoid any of the manipulations and frauds that marked previous elections.

Fox Marble eyes expansion as it hopes to turn a corner in 2020
Serbia and Kosovo agree to restore railway, motorway links
TRACE: A closer look at corruption risk in the western Balkans