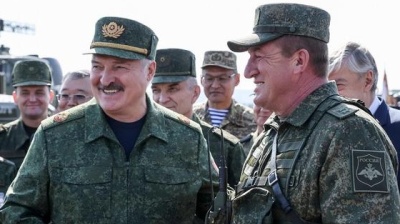 Lukashenko today signed a decision ordering the Belarusian border guards to increase their focus along parts of the border “where new external challenges and threats to border security are possible, especially on the border with Ukraine.”

Tensions have been heating up along the Belarus-Ukraine border lately as Russia has concentrated its military presence in Belarus South-Eastern region Gomel, close to Kiev. Belarus and Russia have said that this has been done in order to strengthen the borders of the Belarusian-Russian Union State against external threats in the joint military exercise “Allied Resolve”. Western countries and independent analysts, on the other hand, connect it to Russia’s military build-up around Ukraine and its increased political and military pressure on Kiev.

During last week, reports started rolling in from belarusians of Russian military equipment being transported all around the country. On Sunday, the Russian Defence Ministry announced that it had sent Russian Su-35S fighter jets to Belarus to participate in the military exercises; and on Friday, two batallions of Russia’s S-400 “Triumf” surface-to-air missile systems had begun redeploying to Belarus. The two battalions were supposedly to go on “air defence combat alert” as part of an inspection of the Union State’s response forces, reported TASS.

One can’t help but wonder, how long the plans for “Allied Resolve” have been in the works? According to Lukashenko he agreed on hosting the exercises of “Allied Resolve” with Putin in December 2021. However, Lukashenko has adopted an increasingly hostile rhetoric against Ukraine throughout 2021. Already in August last year, Lukashenko said he would purchase Russian S-400’s along with aircraft, helicopters and “A lot of weapons.” Allegedly, the next generation surface-to-air missile systems needed to be purchased since Belarus had started to feel “the heat from the south”, i.e. from Ukraine.

The increasing Russian militarisation of Belarus could be a way to put pressure on Kiev to abstain from Nato membership and to adopt a more “Russian friendly” policy. The long-term effects of it will, however, be a more or less permanent Russian military presence in Belarus, closer to the Nato-countries’ borders. It could be the price which Lukashenko has had to pay for all the loans and political backing which Russia has given him so far, and he’ll continue to support Russia in exchange for more support.

So, is it all settled then?

Has Lukashenko completely capitulated to Russian military expansion and abandoned Belarus’ long-standing position on neutrality? For Ukraine, the West and the Belarusian opposition this is definitely the case.

For Ukraine, EU and Nato, this began last year when migrants flooded the Belarus-EU borders from Belarus. Western countries blamed the Belarusian regime of organising the migration and accused Belarusian security forces of staging provocations along the border. They claim that the Belarus’ border guard cut wires, pushed migrants over the border and supplied them with tools and even stun-grenades to fight back Polish border guards.

Oppositional news outlets have already began calling the Russian forces “occupational forces”. Last week, in response to the Russian military movements, the opposition group “CyberPartisans” hacked various servers and databases of the Belarusian state railway provider. One of the hackers' demands for restoring access was that Russian troop movements came to a halt.

US President Joe Biden has said that the US is considering sending 1,000-5,000 additional troops to Nato’s eastern flank as a response to Russian forces in Belarus, and the US Embassy in Belarus has warned its citizens in the country, mentioning “unusual military activity of Russia near the borders of Ukraine, including the border with Belarus.”

Today, it looks like Russia is fulfilling the prophecies of several defence analysts from last year that Russia wanted to establish a de-facto military presence in Belarus through the creation of training centres and by repeatedly holding military exercises.

However, it’s also worth noting that Russia still hasn’t created a military base in Belarus, something Lukashenko has been categorically against for years. One should also remember Lukashenko’s statement from last December (previously reported on by bne), that “if Russia faces aggression from Ukraine, we will stand by Russia legally, economically, politically. The legal aspect is the main thing.”

According to Lukashenko, Belarus doesn’t “need a war”, something he reiterated during last autumns migrant crisis. However, he’s always followed this up with a claim that the US is using Poland and the Baltic states to instigate a war, and that the United States needs a war in the region.

The Belarusian constitutional referendum is coming up in February and the opposition is moving to boycott it, encouraging its followers to ballot invalid voting cards to show what they think about it. Recently, Lukashenko’s deputy head of administration Olga Chuprys said on state television that it will be possible for Belarus’ president to also head the All-Belarusian People’s Assembly (APA).

The APA is supposed to gain constitutional status after the referendum. According to some, it will even hold more power than the president. Previously, independent analysts and opposition activists have speculated that Lukashenko will move over to the APA. This statement therefore increases fears that he might even chair both positions.

Lukashenko said on Friday, that the only thing that can prevent the referendum is a war. Bne Intellinews has previously reported on why a war with Ukraine would create extreme political, human and economic losses for Russia. The Belarusian population would doubtfully be any happier with the regime if it actively supports an invasion of Ukraine, and as US diplomats have speculated, hardly the Belarusian elite either. Lukashenko is right, Belarus doesn’t need a war. The question is who’s interests the Belarusian regime’s actions will be guided by?

NEMETHY: Where are US markets? Where are they heading?
EU opens loophole for Russian gas-for-rubles scheme
End of siege of Azovstal is near as hundreds of wounded Ukrainian troops evacuated