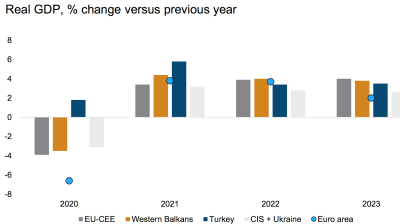 The wiiw expects CEE growth to be lower than Western Europe this year and barely level with it next year.
By Robert Anderson in Prague April 16, 2021

Central and Eastern Europe’s economic recovery will be strong but delayed, because many countries have had to reimpose lockdowns to contain the coronavirus (COVID-19) pandemic, said the Vienna Institute for International Economic Studies (wiiw) in its spring forecast.

It has revised upwards its forecast for growth for the region this year to 3.8%, having predicted 3.1% GDP growth in its autumn forecast.

With the recovery beginning in the middle of the year, the wiiw predicts most of the region (which for it also includes Turkey and Kazakhstan) to return to pre-crisis levels of GDP by the end of the year, but with great differences in pace. Several countries in the Western Balkans will only regain their previous GDP levels in 2022, and Montenegro not until 2023.

In terms of economic growth, CEE mostly did better than Western Europe last year, falling only 2.3% overall, with the main exceptions being tourist-dependent countries such as Croatia and Montenegro.

However, the region has been badly hit by the second wave of the pandemic, and the wiiw expects growth to be lower than Western Europe this year and barely level with it next year. “Only in 2023 will the convergence process start again in our region,” Richard Grieveson, deputy director, told a webcast.

“These are countries that either used fiscal or monetary policy very successfully to mitigate the downturn (Turkey and Serbia) or else suffered especially badly last year, so that they will benefit from favourable base effects in 2021 (such as Croatia and Montenegro),” the wiiw reported.

Turkey will continue its strong performance, and the wiiw has revised upwards its forecast for this year by 1.7 percentage points. It, however, predicts growth to slow to 3.4% in 2022 and 3.5% in 2023. “Turkey and Serbia are the success stories of the pandemic so far,” said Grieveson.

wiiw expects the weakest 2021 real GDP growth to be in Estonia (1.2%), Lithuania (2.1%) and Latvia (2.8%). The Baltic states, which are suffering a severe second wave, have had their growth forecasts for this year revised down drastically, Estonia by 2.7 pps, Lithuania (2.4pp) and Latvia (1.6pp).

CEE (and particularly Central Europe) handled the pandemic better than Western Europe last year, with tough lockdowns and accommodating fiscal and monetary policies. It was also helped by being less reliant on the hard-hit services sector. But this year the lockdowns have been less stringent than in the first wave, and worker mobility has been higher.

“In the second wave CESEE has sacrificed public health for the economy in terms of restrictions,” said Grieveson, pointing out that six of the 10 countries with the worst excess death rates in the world are in the region (Moldova, Serbia, Lithuania, Bulgaria, Macedonia and Russia). “This will unfortunately have negative economic consequences this year.”

Grieveson said the central question now was the roll-out of vaccines, with Ukraine, Moldova and parts of the Western Balkans set to take years to vaccinate their populations at current rates. “International solidarity on vaccines is going to be crucial to help the poorer parts of CESEE to exit this crisis, but unfortunately we don’t see much of that at the moment”, he noted.

Growth this year will be driven by a combination of goods and services exports, as the global economy recovers; the drawing-down of savings; better domestic sentiment, as the vaccination rates increase; and fiscal and monetary support, the wiiw reported. “Consumption will be [the] main driver everywhere in the next couple of years,” said Grieveson.

From next year, the EU Recovery funds will also start to kick in for Central Europe.

The wiiw stressed that its spring forecast was subject to great uncertainty and there were several risks to the outlook. But the wiiw analysts did not see rising interest rates as a big concern, given the way the region looks more to the ECB than the US Fed, and they argued that the current rise in inflation was likely to be short term, given the still very large output gap.

The exception they pointed to was Turkey, where debt is dollar-linked and short-term. “This is the one to watch here in terms of risks,” said Grieveson.

Croatia’s retail trade up 14.3% y/y in March as shopping habits return to normal