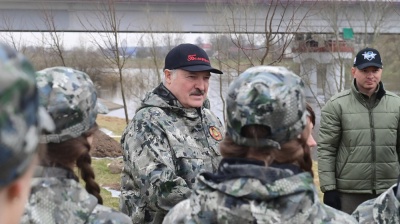 Belarus President Alexander Lukashenko says he has a big announcement this week that has sparked speculation of a merger with Russia. The president also claims Russia's FSB has thwarted a plot of kill him / wiki
By Ben Aris in Berlin April 19, 2021

“In the near future, I made a decision, we will formalise it now, I will announce it. This will be one of my principal decisions for a quarter of a century of presidency. It will be very serious. Therefore, even if I am not there, in the popular saying, "only through my corpse" and so on, they will not succeed. I made a decision. Now I need to formalise it,” Lukashenko said in a statement published on the state run Pul Pervyi Telegram channel.

Lukashenko also noted that, most likely, this decision will be made in the format of a decree.

However, the embattled president gave no details as to the nature of the upcoming announcement.

The tease comes in a week where Russian President Vladimir Putin is also due to give his state of the nation address to the Russian people, providing the perfect opportunity for the Russian president to follow up with a similar announcement.

Fuelling the speculation has been a series of high-level meetings between not only Putin and Lukashenko, but a series of visits by most of Russia’s cabinet over the last year since Lukashenko was re-elected in the disputed August 9 presidential election.

Russia and Belarus prepared the groundwork for a merger with the Union State deal signed in 1999 that laid out the ground work for a ruble-zone like deal that would bring the two countries much closer together.

Since then there has been a lot of unexplained to-ing and fro-ing between Moscow and Minsk by most of Russia’s Cabinet, starting with an announced trip by Prime Minister Mikhail Mishustin and most of his Cabinet in September for talks, although no details on the subjects under discussion were given to journalists.

In a warm up to this week’s announcement Lukashenko also announced that Russian security forces had successfully thwarted an assassination attempt on the president’s life and that of his son.

“Why am I not talking about it? Because it directly concerns me and my children. If you noticed, I often said: they will pump us, it will take a long time, they will not leave us behind, we still do not know much. Now we know more, but we do not know everything. But I assumed,” he said as cited by TUT.by.

Lukashenko also noted that an attempt to organise a rebellion first, and then a "creeping coup" failed in Belarus.

Russia’s Federal Security Service (FSB) backed up Lukashenko comments saying it had arrested the Belarusian political scientist Alexander Feduta and the American lawyer of Belarusian origin Yuri Zenkovich in Moscow in connection with an alleged military coup in Belarus and attempt on Lukashenko’s life.

“According to the anticipatory information received from the Belarusian partners, in the private chats of one of the internet messengers, the ideologues of the Belarusian radical opposition Zenkovich Y. and Feduta A. organised a discussion of the plan for an armed rebellion in Belarus and decided to hold a personal meeting in Moscow using the measures available to them conspiracy with the opposition-minded generals of the Armed Forces of the republic,” the release says.

“Upon Zenkovich's arrival in Moscow after consultations in the USA and Poland, the scheduled meeting took place in a separate office of one of the capital's restaurants. During the meeting, the conspirators told the “Belarusian generals” that for the successful implementation of their plan, it was necessary to physically eliminate practically the entire top leadership of the republic. They detailed a plan for a military coup, in particular, including the seizure of radio and television centres for broadcasting their appeal to the people, blocking in the capital of the republic units of internal troops and riot police loyal to the current government. A complete shutdown of the power system of Belarus was being prepared to hinder the actions of power and law enforcement agencies. It was assumed that some armed formations would begin the active phase (“partisans"), located on the so-called. "Hidden bases", the statement said.

The "ultimate goal" was "to change the constitutional order with the abolition of the presidency and the imposition of the country's leadership on the National Reconciliation Committee."

"At the same time, Zenkovich planned to become the curator" of the country's parliament and the legal system, while Feduta wanted to engage in political reform and ideological work," the FSB said.

“The oppositionists have chosen the day of the Victory Parade in Minsk on May 9 this year as the date of the military coup,” the FSB concluded.

The FSB went on to explain that after documenting the meeting, the conspirators were detained and handed over to their Belarusian partners.

The Belarusian investigative authorities are investigating a criminal case on the grounds of a crime under Article 357 (conspiracy or other actions committed to seize the state authorities) of the Criminal Code of the Republic of Belarus.

Conviction carries a maximum of the death penalty.

Commenting on the plot Lukashenko said: “We discovered the work of clearly foreign intelligence services, most likely the Central Intelligence Agency, the FBI, I don’t know which of the Americans worked there. We discovered their desire to come to Minsk and start organising an attempt on the life of the president and children,” as cited naviny.online.

On a personal note Lukashenko warned those who threaten his children with reprisals.  “God forbid they touch my children, who are not involved in this at all! God forbid, not only to mine, but also to yours! It will be, I’ll tell you frankly, it will be a terrible massacre,” the Belarusian president said.