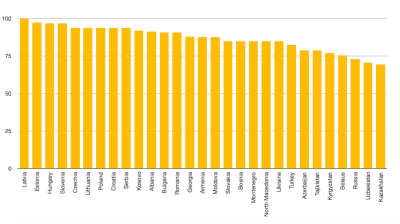 Women in the emerging Europe region have just over 86% of the legal rights afforded to men, on average, shows data compiled by the World Bank in its Women, Business and the Law 2022 report.

However, with the exception of Latvia, where women have the same legal rights as men, women in countries across the region are among the almost 2.4bn worldwide that don’t enjoy the same economic rights as men, the study finds.

World Bank researchers assigned a score out of 100 to each of the 190 countries assessed in the study based on laws and regulations in eight areas affecting women’s economic participation: mobility, workplace, pay, marriage, parenthood, entrepreneurship, assets and pensions.

Latvia is one of only 12 countries worldwide that do not have legal barriers that prevent women’s full economic participation; they exist in the remaining 178 countries. On top of that, women face some form of job restriction in 86 countries, and there is no guarantee of equal pay for equal work in 95.

The average global score is 76.5 points out of a possible 100, and all but four of the emerging Europe countries do better than that.

Most countries in the region fall into the Europe and Central Asia (ECA) region, with the remainder in the OECD region, which has the highest average score of any region worldwide. The ECA region comes in second, with an average score of 84.1 points, almost eight points above the global average, and up 0.7 points compared to the previous ranking.

The top performers in emerging Europe were overwhelmingly the EU member states in Central Europe, the exception being Slovakia, which performed less well than a number of countries from the Western Balkans and South Caucasus.

At the other extreme, legal parity was lowest in some of the Central Asian republics – Kazakhstan had the lowest score of just 69.4 – as well as Russia and Belarus. Kazakhstan scored particularly poorly on pay and pensions, as did Uzbekistan.

The Western Balkans as well as Armenia, Georgia and Moldova were clustered in the mid 80s to low 90s, lower than their EU member peers but still well above the global average.

Around the world, the Middle East and North Africa and sub-Saharan Africa regions showed the strongest improvements in the 2021 index, though they continue to lag behind other parts of the world overall.

Broken down by indicator, the Pay and Parenthood indicators had the lowest average scores in the index, but at the same time the largest numbers of reforms were made in the Parenthood, Pay and Workplace areas.

“While progress has been made, the gap between men's and women’s expected lifetime earnings globally is $172 trillion – nearly two times the world’s annual GDP,” said Mari Pangestu, World Bank managing director of development policy and partnerships.

“As we move forward to achieve green, resilient and inclusive development, governments need to accelerate the pace of legal reforms so that women can realise their full potential and benefit fully and equally.”

In the Parenthood category, there have been a number of reforms concerning paternity leave and shared parental leave, but the global average score for this category is still low.

“Women cannot achieve equality in the workplace if they are on an unequal footing at home … That means levelling the playing field and ensuring that having children doesn’t mean women are excluded from full participation in the economy and realising their hopes and ambitions,” said Carmen Reinhart, senior vice-president and chief economist of the World Bank Group.

Three countries from the ECA region were among the 23 worldwide that reformed their laws in 2021 to advance women’s economic inclusion, according to the report. Armenia, Georgia and Ukraine all introduced paid paternity leave, while Ukraine also equalised the ages at which women and men can retire with full pension benefits.

However, says the report, “Important challenges remain in the areas of Pay and Pension, which have the lowest average scores in this region. For example, almost half of the economies in ECA do not mandate equal remuneration for work of equal value, and the ages for full pension benefits are still unequal in 17 economies.”