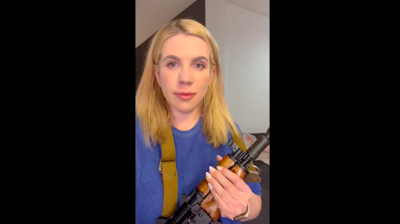 MP Kira Rudik decided to arm herself after the invasion. "Bravery has no gender," she tweeted. / Kira Rudik @kiraincongress
By bne IntelliNews March 8, 2022

Pensioners, an MP and a former beauty queen are among the women who have taken up arms and vowed to fight to defend Ukraine. Since Russian troops flooded across the border into Ukraine, martial law has been imposed and men of conscription age are forbidden from leaving the country. Alongside them many women and both men and women pensioners have decided to stay and defend their homeland.

MP Kira Rudik, who tweets as @kiraincongress, is among those who have been receiving military training in the days since the invasion. She posted pictures of herself on social media holding a gun, saying she decided to arm herself after the invasion.

“Our #women are going to fight as hard as our #men. Because bullets don't really care which hands are firing them. And bravery has no gender,” she tweeted on March 7.

On the morning of International Women's Day, March 8, she again dew attention to the women fighting for Ukraine, tweeting: "So it is past midnight in #Kyiv — and International #Women Day is on! This year se are holding flowers and guns: we have a priviledge to fight for our country along with men. Ukrainian women are incredible. Because of them — we will win!"

Also volunteering for active service is former Miss Grand Ukraine Anastasiia Lenna. The glamorous and aspirational content of her Instagram page was abruptly replaced with pictures of herself dressed in military uniform holding a gun, with the hashtags #standwithukraine and #handsoffukraine. Lenna said she shared the pictures to inspire others — she has also been using her platform to call for support and donations for the Ukrainian armed forces.

“Everyone who crosses the Ukrainian border with the intent to invade will be killed! Stop Russian aggression! Speak up, world!! Now!!” she wrote in one Instagram story.

The name Valentyna Kostyantynovska wasn’t known in Ukraine until a video of the 79-year-old volunteer learning how to fire a Kalashnikov went viral on social media. Kostyantynovska told Reuters she wanted to lean how to shoot since the Russian annexation of Crimea, but initially joined the Territorial Defence and started training as a medic.

"But then I saw my dream, the machine gun ... and started learning how to use it," she told the newswire. "I cannot do much, I can help the wounded ... I will shoot and I know they will kill me … And so it should be, so less young people would die.”

Olena Zelenska, the wife of Ukrainian President Volodymyr Zelenskiy, has stayed in the country alongside her husband, despite the danger. She has taken to social media to praise the courage of the women fighting to defend Ukraine, as well as those who are volunteering in other ways or continuing with their jobs to allow the country to function.

"Before the war (how scary and still unusual it is to say this), I once wrote that there are two million more women in Ukraine than men," she wrote. "Just statistics. But now it is taking on a whole new meaning. Because it means that our current resistance also has a particularly feminine face.”

Lenna, Rudik and Kostyantynovska are all volunteers, but women have been part of the Ukrainian military for almost three decades. Many more joined after 2014, a critical year in the history of Ukraine when Russia illegally annexed the Crimea from Ukraine and backed the two self-declared republics of Donetsk and Luhansk in Ukraine’s Donbas region.

Two years after the annexation of Crimea, women were given the right to fight in combat, and in 2018 an expanded set of combat roles were opened up to women. Then as the threat of war with Russia loomed, a new regulation entered force stipulating that women aged 18-60 who were fit for military service had to register to be mobilised in case of a major war. That has now come to pass.

And there are no signs of an imminent end to hostilities. Hopes of a breakthrough in talks are not high, and should the talks fail this week could see the start of more intense fighting and a Russian assault on the Ukrainian capital Kyiv.

bneGREEN: Poorer cities the most exposed to climate change
NEO: Rising in the East, Setting in the West: Russia strengthens trade with Global East
Stagflation fears continue to rise

Russia catches a nasty dose of the Dutch Disease

Russia has caught a bad case of the Dutch Disease, an economic ailment that sends the value of a currency soaring well beyond what it should be and smothers the rest of the economy.

NEO: Rising in the East, Setting in the West: Russia strengthens trade with Global East
9 hours ago
Stagflation fears continue to rise
15 hours ago
The economics of herding in Mongolia
2 days ago
EXPLAINER: how a price cap on Russian oil might work
2 days ago
Russia catches a nasty dose of the Dutch Disease
2 days ago