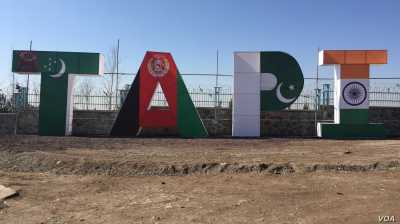 A land acquisition issue in Afghanistan is the latest difficulty hindering TAPI.
By Kanat Shaku in Almaty January 28, 2020

Work on laying down the Afghan stretch of the 1,814km-long Turkmenistan-Afghanistan-Pakistan-India (TAPI) natural gas pipeline faces another delay due to a land acquisition postponement and other issues, Afghan news agency TOLOnews has reported, citing local officials. 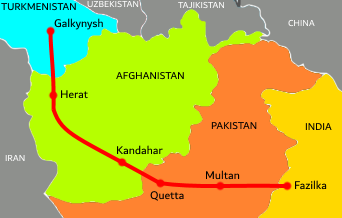 Construction on the 816km-long Afghan section of the pipeline officially began in February 2018, but almost two years later no significant progress has been made. The pipeline, expected to pass through Afghanistan’s Herat, Farah, Nimroz, Helmand and Kandahar provinces and to be constructed alongside the Herat-to-Kandahar Highway, faces another six-month delay on the construction launch schedule, the report said, quoting Afghanistan’s Natural Resources Monitoring Network. The Afghan Ministry of Mines and Petroleum reportedly said some letters required for the project launch have not yet been signed.

“There is a need for the approval of the law [on land acquisition] but there are delays because members of parliament are busy in [discussing] former decrees from the president. I think it will take six months to pass this phase,” said Ibrahim Jafarai, a member of the Natural Resources Monitoring Network.

When an agreement for the TAPI project was originally signed in 2015, work on Afghanistan’s segment of the pipeline was scheduled to start in 2017. In 2019, the Ministry of Mines and Petroleum announced that construction work on the Afghan stretch would start in 2020. Afghanistan is looking to earn over $400mn in transit duties annually from a functioning TAPI pipeline.

“We will sign four MoUs [memoranda of understanding] in the near future, and the host country’s [Turkmenistan's] MoU is important. After that, the construction work of the project will begin in Afghanistan,” said Abdul Qadir Mutfi, a spokesman for the Ministry of Mines and Petroleum.

The TAPI pipeline has been designed to provide up to 33bn cubic metres per year of gas from fields in eastern Turkmenistan. Gas flows would go to Afghanistan, Pakistan and India. The Turkmen pipeline section is expected to cost $1bn, while the whole project is projected to cost $10bn. Some estimates show the costs ballooning to up to $22.5bn. Though Turkmenistan formally broke ground on the pipeline in December 2015, only limited ground work appears to have taken place, despite claims to the contrary by Turkmen officials.

The Turkmen-led TAPI operating consortium even announced in 2018 that the Turkmen section was finished, with the bulk of the work focus moving on to the Afghan section of the pipeline. Yet in April 2019 Turkmenistan awarded a contract to Russian pipe mill Chelpipe to supply the entire 214 km of pipes needed for the Turkmen section, casting doubt on official claims about the pipeline section’s completion.

TAPI is due to reach its financial close in early 2020. But no public evidence exists to demonstrate that Turkmenistan has been able to secure the investors it needs. War-torn Afghanistan and geopolitical tensions between Pakistan and India make TAPI a testing project to carry out, though to everyone’s surprise in 2018 the Taliban expressed their support for the project, promising to help make it a reality in Afghanistan in exchange for jobs.

Oligarchs trying to derail Ukraine’s privatisation programme, warns the head of Ukraine’s State Property Fund
9 hours ago
International Ice Hockey Federation (IIHF) has stripped Belarus of the right to hold the World Championship this year
11 hours ago
Russian opposition activist Navalny calls for supporters to take to the streets this weekend
22 hours ago
Armenia ‘to extend life of its 1970s Metsamor nuclear power plant after 2026’
18 hours ago
Turkcell denies any affiliation with $1.6bn loan in default extended by Ziraat Bank to Virgin Islands company
2 days ago