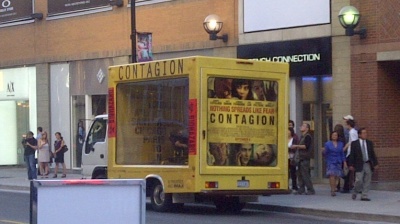 Can Turkey's ills be kept out of wider circulation?
By bne IntelIiNews November 19, 2021

Were Turkey’s crisis on fresh falls in the lira to worsen, some form of financial contagion on other emerging markets may be seen, according to an analysis from Capital Economics.

“But there are reasons to think that the impact would be smaller this time around. First, EM currencies generally don’t look like they are in need of a significant adjustment. 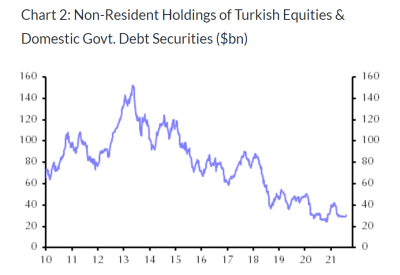 (Charts above and below by Capital Economics).

“And second, after years of erratic policymaking and crises, foreign investors have pared back their exposure to Turkey. Non-residents’ holdings of Turkish equities and domestic government bonds are, in dollar terms, only a third the size that they were on the eve of Turkey’s 2018 crisis. As a result, absolute losses for holders of Turkish assets would probably be lower, and forced selling of other EMs’ assets might be smaller as a result.”

Observers are assessing how the latest crisis engulfing Turkey is likely to make it harder for the country to roll over its external debts, with the banking sector particularly vulnerable.

Shah continued: “The collapse in the lira will add to Turkey’s inflation problem and also risks worsening currency mismatches on balance sheets. What’s more, the rise in external borrowing costs will make it harder for Turkish borrowers to roll over their external debts (which are denominated mainly in foreign currencies). As we have noted on our Emerging Europe service, the key risk lies in the banking sector.” 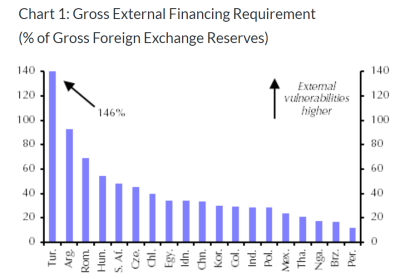 One way of showing the severity of the risks is by examining Turkey’s gross external financing requirement, namely the sum of the current account deficit and short-term external debt, or, in other words, the capital inflows required over the next year. These are shown in Capital Economics’ Chart 1 (above), measured as a share of central banks’ FX reserves, so giving a sense of the extent to which the central bank can help struggling borrowers.

Said Shah: “In Turkey’s case, foreign exchange reserves only cover about two-thirds of the country’s short-term external financing needs. And this is based on gross FX reserves; on a net basis, reserves are far lower.

“For most other major EMs, though, the risk of serious balance of payments strains seems much more limited. Argentina and Hungary are perhaps the biggest worries, but even in those places foreign exchange reserves more than cover external financing needs over the next year [see Chart 1 again].” 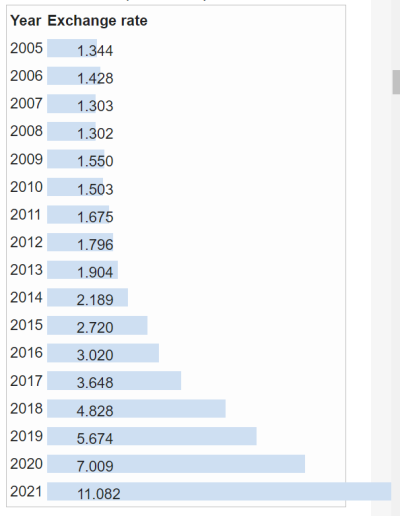 Ukraine together with Russia is one of the world’s biggest grain exporters and already the main source of wheat for many developing countries. A Russian invasion of Ukraine would smash its agricultural sector and send grain prices rocketing.

The way the utilities system is designed meant that a whole series of related essentials were quick to fail.

War in Ukraine would send global grain prices soaring, threatening a possible repeat of the Arab Spring
3 hours ago
Uzbekistan: How a power outage sent a country into meltdown
9 hours ago
Emerging Europe M&A soars by 55% to €94bn in 2021
1 day ago
Lithuania looks for quality, not quantity in fintech
1 day ago
Who needs a war?
3 days ago