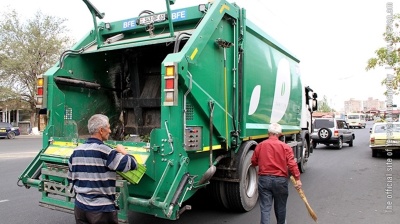 Yerevan has received its first batch of new rubbish bins and garbage trucks, as the authorities try to overcome serious failures with waste disposal that have seen rubbish piled up around overflowing bins across the city.

“The problem of waste will gradually be mitigated. Again, we ask our compatriots to come to terms with the garbage disposal operator's inadequate behaviour and to be patient,” Karapetyan said in a post that attracted a flood of comments from angry residents, complaining of the stench from uncollected rubbish, litter blowing in the air on windy days and verges strewn with trash.

According to local media, AMD900mn ($1.8mn) has been allocated from the state budget to tackle the urgent problem of waste disposal in the capital.

Waste disposal is the responsibility of Sanitek, the Armenian division of Lebanon headquartered Sanitek International Group, that started providing services in Yerevan in December 2014. However, complaints about Sanitek have been growing over the past couple of years, and the piles of trash building up in the Armenian capital have sparked protests by local residents. According to local media reports and posts by residents on social media, the situation got worse in 2018, leading to speculation this was connected with the ousting of the former regime in the velvet revolution that spring. The company has repeatedly been fined by Yerevan city hall in the last few years, for offences such as its failure to remove rubbish from the capital effectively.

Sanitek head Nicolas Tawil defended himself at a press conference in September 2018, saying that the velvet revolution of 2018 and subsequent change of leadership in Yerevan city hall had no bearing on the company’s activities. He threw part of the blame on the public, saying that 1,000 bins had been burnt since Sanitek took over the contract, Hetq reported at the time. The bins were used as barricades during the Electric Yerevan protests in 2015.

Tawil also criticised the failure to separate out construction waste from household trash, and the lack of repairs on the road leading to the main city dump, resulting in damage to the company’s equipment. He added that the company had been operating at a loss for the previous two years.

However, this had little impact on popular opinion. A recent poll by the International Republican Institute (IRI) found that while at the national level household finances and jobs remain the biggest concerns, at the level of the small towns and villages it is “garbage collection” that is the number one concern, just ahead of jobs.

Yerevan mayor Marutyan has taken a strong stance on the issue, saying back in March that Yerevan residents “won’t put up with dirty streets anymore. He criticised Sanitek’s work and warned that if the company is unable to provide proper sanitary cleaning the city authorities will undertake the job instead.

Armenia isn’t the only former Soviet country where the public are pressing politicians to clean up their cities.

Waste management has become a hot political issue in Russia as well. Following mass protests in 2018 by local residents near the main landfill that hosts Moscow’s rubbish, in January, Russian President Vladimir Putin signed a decree to create an all-Russia recycling company.

While purely political protests lead by anti-corruption blogger and opposition activist Alexei Navalny typically see only a few hundred, or at best a few thousand, protestors turn out, civic issues like smelly landfills have the power to move large numbers of people — around 25,000 in this case — which the Kremlin takes much more seriously. The urgent need to deal with growing volumes of waste became a key theme in President Vladimir Putin’s latest phone-in last month as well.

With countries across Eastern Europe becoming increasingly affluent and buying more consumer goods, the volume of packaging waste is steadily increasing, and without action by the authorities the problems are only going to get worse.