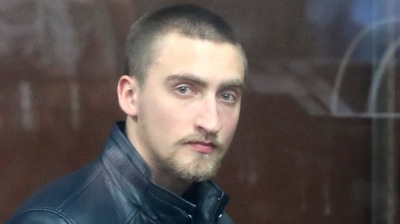 The brutal treatment of actor Pavel Ustinov (pictured) by police has added to calls for change in Russia, where political developments in Ukraine are being watched closely.
By Ben Aris in Berlin September 18, 2019

The popularity of Ukrainian President Volodymyr Zelenskiy has overtaken that of Russian President Vladimir Putin  according to Russian independent pollster the Levada Center and Ukrainian pollster Ratings Group found, just as Russian get more vocal in calling out the state's injustices.

According to the later, Zelenskiy's popularity has risen from 58% in July to 71% in August/September according to Ratings Group poll in September, overtaking Putin for the first time. The Russian president has seen his popularity fall slightly from 68% to 67% over the same period, according to a Levada poll.

Zelenskiy was swept to power in a landslide victory in April and after his party followed up with another landslide in the July general election, his government has thrown itself into the game with a welter of high profile anti-corruption legislation. Zelenskiy also pulled off a major PR victory by organising a POW swap with Russia, the first major exchange of prisoners since hostilities began five years ago.

The result is Zelenskiy's popularity at home has soared with a majority of Ukrainians believing the country is going in the right direction for the first time since the Euromaidan demonstrations in 2014. And Zelenskiy's personal popularity continues to rise fast, even as Ukraine’s reputation amongst the international community has taken a body blow after the house of former National Bank of Ukraine (NBU) governor Valeria Gontareva was torched in an arson attack on September 17.

However, now Zelenskiy's popularity has spilled over into Russia. Ukraine just held two of the most vibrant and hotly disputed elections in the last three decades in Eastern Europe that were widely followed in Russia. The official Russian broadcasters tried to play down Ukraine’s elections and muddy the water, but as bne IntelliNews reported, the influence of state controlled TV has been falling fast in recent years as most young people have moved online to get their news and the whole Ukrainian show was live streamed on the internet with Zelenskiy making heavy use of social media in this campaign.

The real choice offered Ukrainian voters and the heat of the campaigns stands in stark contrast to the turgid nature of the recent Moscow city government elections and the brutal police beatings protestors received when the leading opposition candidates tried to demonstrate against the authorities' decision to bar most of them from the election.

Ukraine is now playing a complicated role in Russian politics where it is not leading the way per se, but it is certainly informing Russians of alternatives and fuelling a process of political maturation that is clearly under way.

While Putin still maintains tight control over the political process there has been a noticeable mushrooming of dissent in the public forum and increasingly from inside the establishment.

The first noticeable rebellion against the authorities came in August when investigative reporter Ivan Golunov was arrested on trumped up drug charges. The reaction from the press was for the three largest newspapers to run identical front pages the next days saying “I am/We are Ivan Golunov” that drew on the solidarity around the journalists killed in Paris in the Charlie Hebdo massacre in 2015. (The Cyrillic characters for “I” and “We” were intertwined in the headlines, and the image has since become something of an icon for press protests.) The impact of the newspaper protest was powerful enough for the state to back down, admit errors and release Golunov. 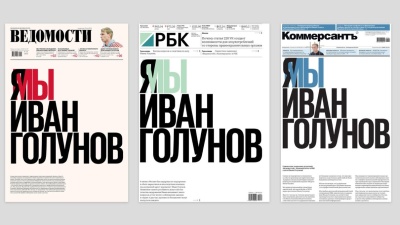 This week another case surfaced when the twenty-something actor Pavel Ustinov was given a 40-month sentence in a Siberian penal colony for assaulting a riot police officer during the recent Moscow demonstrations. Prosecutors claim that Ustinov provoked police and dislocated one officer’s arm. The trouble is copious videos show that no such thing happened and four OMON riot police apparently singled out Ustinov from a crowd and beat him before dragging him away. The video evidence was ruled inadmissible by the judge.

The blatantness of this miscarriage of justice has caused yet another outpouring of moral outrage and another “I am/We are Pavel Ustinov” on social media. The difference is that some of Russia’s biggest household names have put their names behind the cause, including a group of priests from the Russian Orthodox Church who wrote an open letter saying the case “makes a mockery of justice”. Most surprisingly of all RT's editor-in-chief Margarita Simonyan, who is normally a mouthpiece of the administration, joined the campaign.

"Injustice brings down governments," Simonyan posted on Twitter. She has allowed the story to run on both the online and English language versions of RT.

BREAKING: Ukraine cancels dollar bond sale after NBU governor resigns
5 hours ago
Moldova’s ruling Socialists accused of “abducting” MP after he defected to Pro Moldova
7 hours ago
Ukraine’s NBU governor Smolii quits under pressure from oligarchs
16 hours ago
Russian vote through changes to constitution in referendum, Putin cleared to rule until 2036
8 hours ago
Turkey hit by VW’s scrapping of auto plant plan and refusal by Europe to list country as safe for tourism
13 hours ago