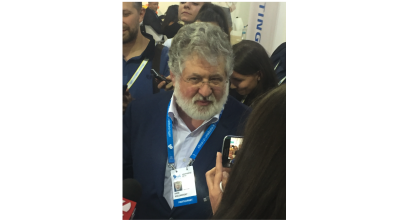 Ukrainian President Volodymyr Zelenskiy has stripped his friend and leading oligarch Ihor Kolomoisky of his Ukrainian citizenship in a move that clears the way for his arrest and deportation to the US, where he is under investigation for large-scale money laundering.

The shock move is seen by analysts as yet another move by Bankova to assuage its Western partners' corruption concerns and unblock some $18bn in financial aid Kyiv desperately needs to stave off an economic meltdown and to fund the budget.

The president has stripped Kolomoisky of his citizenship, but the government has yet to make a formal announcement and has not commented on the decision. The decision was reported by the Pittsburgh Post-Gazette and two government sources confirmed the fact to the paper. Kolomoisky is under investigation by a Grand Jury in the US for money-laundering schemes that involved billions of dollars.

Zelenskiy has recently been cleaning house and taking tighter control of the government. Last week he began a purge of the Ukrainian Secret Services (SBU), suspending the head of the service and his long-time friend Ivan Bakanov, after accusing hundreds of agents of betraying their country and working for Russia. Over 650 criminal cases have been opened against SBU officers. At the same time, he sacked his General Prosecutor, Iryna Venediktova, for unspecified reasons.

Zelenskiy also addressed fears that Western arms delivered to Ukraine are being stolen and re-exported back into Western Europe to be sold on the black market. Bankova has denied there is a problem, but last week Zelenskiy ordered a new monitoring system to be set up to better track where Western arms were being sent to re-assure his partners. Europol reported last week that it had found no evidence that arms from Ukraine were finding their way into Western Europe so far.

Now Zelenskiy is moving on to the oligarchs. In addition to Kolomoisky, another nine businessmen associated with the billionaire had their passports revoked and now also face prosecution and deportation.

The nine others, include Gennady Korban, chief of the Dnipropetrovsk Oblast Territorial Defence Force and a one-time ally of the oligarch, and Vadym Rabinovich, leader of the pro-Russian political party, have been stripped of their citizenships, according to a document posted on Facebook and reported by The New Voice of Ukraine news outlet.

In a related story, oligarch and Ukraine’s richest man Rinat Akhmetov gave up his media empire and transferred the licences of his press empire to the government in an effort to avoid being labelled an oligarch. A new oligarch law introduced in September 2021 has just gone into force and one of the criteria defining an oligarch is to control media.

Kolomoisky is widely credited with putting Zelenskiy into office in April 2019 by throwing the weight of his media empire, which includes several leading TV channels, behind Zelenskiy’s campaign.

PrivatBank was nationalised and needed a $5.5bn bailout, one of the biggest bailouts of any bank in the CIS since the breakup of the Soviet Union. To this day PrivatBank accounts for the lion's share of the non-performing loans (NPLs) in Ukraine’s banking sector; bad debt, which the management of the bank called the “fraud loans”, accounted for 79.3% of its loan book in June, against the 49.6% NPLs in the banking sector as a whole.

Corporate investigations firm Kroll were hired to conduct a forensic audit of the bank’s books by the NBU and confirmed that most of the money was stolen, but efforts to recover the billions of dollars stripped from the bank have failed.

Kolomoisky is accused of using complicated schemes to whisk the money offshore, much of which was funnelled through investments in the US.

Kolomoisky spent much of the tenure of former President Petro Poroshenko abroad, living first in Switzerland and then Israel, where he also has citizenship and which doesn’t extradite its nationals. Kolomoisky and Poroshenko are considered to be enemies.

However, once Zelenskiy took over as president Kolomoisky returned to Kyiv and launched a campaign to retake control of his bank. This included hundreds of law suits and a campaign of intimidation of the NBU senior management, which the NBU dubbed a “terror campaign.”

Former NBU governor Valeria Gontareva quit her job when a coffin with a manikin dressed up to resemble her was delivered to the door of the NBU building and she told bne IntelliNews in an exclusive interview that she feared for her life and left Ukraine for London. Later her house in Kyiv was burnt down in an arson attack and Gontareva was also knocked down by a hit and run driver in London in suspicious circumstances.

Zelenskiy remained remarkably quiet during all these scandals and no investigation was started into Kolomoisky or his role in the stripping of PrivatBank of its assets, but under extreme Western pressure he eventually passed what was dubbed the anti-Kolomoisky law in May 2020 that made it impossible for the former owner of bank, which had been nationalised, to retake control of it. If the law had failed then there was a high possibility that Ukraine would have defaulted on a $2bn bond that would have plunged the country into economic chaos similar to Russia’s default on its debt in 1998.

Kolomoisky was operating in Ukraine with impunity and Zelenskiy was only taking action against him when forced to do so, but that began to change slowly.

bne IntelliNews called for sanctions to be imposed on Kolomoisky in 2020 at the time of the anti-Kolomoisky law when the oligarch’s shenanigans were posing an existential threat to the country. Likewise, when Zelenskiy pressed US President Joe Biden for a date for Ukraine’s accession to Nato, he was told: “do something about your corruption first.”

Zelenskiy bit the bullet last year with his oligarch speech in March 2021 that was followed by the oligarch law in September 2021.

The US finally also took action and imposed sanctions on Kolomoisky in March 2021 and a Grand Jury investigation was launched. At the same time a London court froze $2bn of Kolomoisky’s assets as part of a civil case brought by the now state-owned PrivatBank in an effort to recover its assets.

The decision to strip Kolomoisky of his citizenship is likely related to Bankova’s efforts to persuade the West to release desperately needed financial support for the budget. As bne IntelliNews has reported, Ukraine is running out of money. The state is running a $5bn a month deficit that is currently largely being funded by the NBU’s printing presses. The US has promised $9bn in cash to support the budget and the EU a mirror loan of €8bn, but both tranches have been dogged by bureaucratic delays. Both the US and Europe are worried if they send cash to Ukraine it will simply be stolen.

Now the country is facing an economic crisis. The NBU has already been forced to double interest rates to a crushing 25% on June 2 and then followed up with a 25% devaluation on July 21 as the cash exchange rates had already rapidly diverged from the official central bank rate. Without concrete financial aid soon, Ukraine faces a currency meltdown and a debilitating balance of payment crisis.

A legal expert in Kyiv, who spoke to the Post-Gazette on the condition of anonymity because of the sensitivity of the matter, said he expects Mr. Kolomoisky and his lawyers to fight the action, arguing that there is no provision in the Ukraine Constitution to strip someone of their birthright.

A dispute has emerged over whether the president can draw on legislative authority to strip people of their naturalisation, or whether the constitution prohibits it.

Though the president's order will likely gain international support in some countries, any move by Ukraine authorities to take the oligarch into custody and deliver him to US law enforcement will be challenged, he said.