Raisi to be Iran's next president 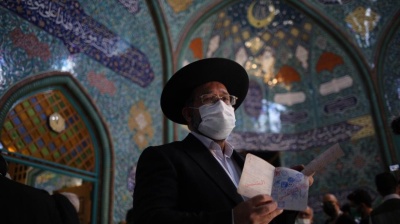 An Iranian Jewish voter casting his ballot at the Hosseinieh Ershad polling centre in Tehran.
By bne IntelIiNews June 18, 2021

Local reports in Iran and the BBC report that religious hardliner and judiciary chief Ebrahim Raisi is to be Iran's next president, with a partial vote count giving him an unassailable lead in the country's presidential election (This is an initial Breaking News report from bne IntelliNews, our main coverage will follow).

The president in Iran has significant influence over domestic policy and foreign affairs, but it is the Supreme Leader who has the final say on all matters of state. Raisi, 60, who was 19 years-old at the time of the 1979 Islamic Revolution, has reportedly already been congratulated on his victory by the three rivals who were permitted by the regime's vetting body to stand against him in the election. Three others given permission to bid for the presidency pulled out before election day.

With 90% of the votes counted, Iranian officials said 28.6mn people had cast their ballots. More than 41mn did so in 2017. The final turnout figure will be watched closely (see our report below, published late on June 18).

As Iran’s polling stations closed on June 18, the question on most people’s lips was not “Who’s won?” but “What was the turnout?”

If, as many have predicted, the number of people that voted is announced as an all-time low, observers will straight away ask whether the regime has irreparably damaged the “Republic” part of the Islamic Republic of Iran by conspiring to arrange an election in which all the top moderates were excluded by vetters from the race.

An alternative eventuality is that everybody missed a last-minute wave of enthusiasm for the little-known moderate Abdolnaser Hemmati that has denied the bolted-on favourite, religious hardliner and judiciary chief Ebrahim Raisi, the 50% or more of the vote that he needs to succeed pragmatic, moderate President Hassan Rouhani, after just a first round of voting. Never say never, but the theory seems fanciful in the extreme. The disillusionment among Iranians who were denied by the theocrats the chance to vote for their favourite moderate or reformist candidate would appear to run far too deep.

In 2017, Rouhani was elected to his second term of office with a landslide defeat of Raisi on a fantastic 73% turnout. Some research has suggested that if Raisi is declared the winner on June 19, it will be on a turnout of something around 40%. Unverified video posts on social media showed many near-deserted polling stations.

A pitiful turnout would undoubtedly severely damage faith in Iran’s political system and may even raise the prospect of mass protests against the Raisi “fait accompli”, similar to the Green Movement protests that broke out in 2009 following the second presidential win of Mahmoud Ahmadinejad, disputed as rigged. A government-ordered crackdown on the demonstrations—sometimes called the “Twitter Revolution” due to the protesters’ reliance on Twitter and other social media to communicate—saw police and paramilitary Basij violently suppress protesters with beatings, pepper spray, arrests and torture. Some demonstrators were even shot dead, while thousands were detained and imprisoned. If there is any sign of large-scale trouble brewing after the election results are announced, expect the authorities to shut down the internet as they have become wont to do.

“If our vote really mattered, we wouldn't be in this constant malaise and dilemma [as to whether to vote]. I think the realisation that nothing will ever change is pervasive among most people these days,” Akram, a 39-year-old female CEO in Tehran, told bne IntelliNews.

“My opinion is that the fundamentals are wrong, it does not matter who will be president as it is only for show, the real decisions come from the Rahbar’s [Supreme Leader’s] office,” said Amir, a 45-year-old jeweller on Tehran’s Ferdowsi Street. “When they don’t even keep their small promises, why the hell would you believe what they say in their election posters?”

The general lack of interest in the election on June 16 drew a response from Supreme Leader Ayatollah Ali Khamenei. He warned Iranians that foreign news organisations were undermining the soul of the country with reports of mass voter apathy. "In less than 48 hours, a crucial event will take place in the country... By your presence and vote, you actually determine the fate of the country, in all major issues," Khamenei said in a televised speech on IRIB.