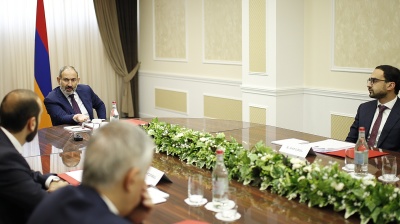 Armenian Prime Minister Nikol Pashinian told a news conference on September 17 that he had signed a motion for the dismissal of Artur Vanetsian, the country’s National Security Service director.

Pashinian added that the decision was based on "bilateral consent." President Armen Sarkisian later in the day signed a decree relieving Vanetsian from his post. Apart from Vanetsian, no other high-ranking official has as yet been dismissed from the post-revolution Pashinian administration.

For his part, Vanetsian claimed he had resigned and criticised Pashinian's working methods in a letter published by Armenian media.

Local news outlets said Pashinian was asked at the news conference if he was unhappy with Vanetsian’s work, but answered: "The work of the head of the National Security Service is not something that can be discussed publicly."

RFE/RL reported that Pashinian also said he expected Vanetsian, who remains head of the Armenian soccer federation, to "focus on the task of helping Armenia's national soccer team to qualify for the European Championship finals".

Vanetsian, a career security officer, was appointed National Security Service director in May 2018, shortly after Pashinian came to power following the country’s velvet revolution and promised a crackdown on corruption and cronyism. The style and extent of the crackdown has caused some disquiet in Russia, Armenia’s strategic ally. Members of the dislodged establishment who had close ties to Moscow are facing criminal investigations.

An International Monetary Fund (IMF) team on April 21 concluded a two-week visit to Armenia during which they held virtual staff-level discussions with the Armenian authorities to discuss recent ... more

Armenia’s private sector will obtain new resources for green financing thanks to a $6mn financial package put together by the European Bank for Reconstruction (EBRD) and ... more