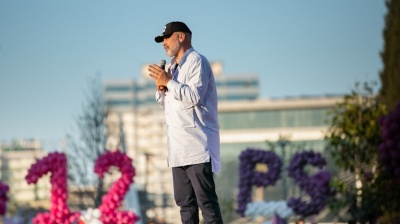 At a polling station in Saranda, southern Albania, Finance and Economy Minister Anila Denaj shared a hug with her defeated rival Ina Zhupa, who congratulated Denaj on the Socialist Party’s victory in the city. In the nearby town of Gjirokaster, Interior Minister Bledi Cuci publicly shook hands with Democratic Party candidates outside the polling station, sending a message of reconciliation to supporters of both sides after a tense and sometimes violent election campaign.

But these moments were the exceptions in an election that has been marred by intense competition and violent incidents before, during and after the vote. As the count nears its conclusion, it is still unclear whether the opposition parties will accept the result or if the kind of unrest that followed previous disputed elections looms.

The latest results, with 92% of the votes from the April 25 general election counted as of midday on April 27, show the Socialists will take 74 seats in the 140-seat parliament, giving the party a majority.

The rival Democratic Party has secured 59 seats and its partner in the Alliance for Change, the Socialist Movement for Integration (LSI), will have just four. The small Social Democratic Party will have three seats. The count is still underway in some districts, but the result is now unlikely to alter substantially.

Socialist Party leader and Prime Minister Edi Rama has announced a victory rally in Tirana’s central Skenderbeg Square for the evening of April 27. The result is set to give Rama an unprecedented third consecutive term as prime minister in post-communist Albania.

The results so far give the Socialists a margin of around nine points over the Democrats, considerably more than forecast in polls immediately before the vote — when the Democrats had been gaining on the ruling party — or in exit polls.

This was a close fought race with the Democrats and LSI uniting in an attempt to prevent Rama’s Socialists securing a third term, which they feared would firmly entrench the Socialists as the party of government. It was also marred not only by violence but also by numerous irregularities, as identified by international observers, notably allegations of vote buying and a blurring of the line between ruling party members’ official positions and their electoral campaigns.

The focus is now turning to how the opposition will respond to the result. While Democratic Party leader Lulzim Basha said shortly after polls closed that his party was heading for victory, he has not yet commented on the latest results.

On April 27, President Ilir Meta, former leader of the LSI, which is now headed by his wife Monika Kryemadhi, issued a statement urging political parties and their representatives to “show prudence and calm” until the final votes are counted. He did, however, go on to mention Albania’s “captured institutions” — a clear jibe at the Socialists — and add: “Although it seemed like an impossible challenge, I am happy that April 25 can serve the democracy and stability of the country.”

A joint statement from two top EU officials stressed the need for the result to be recognised. “All political forces should now ensure the effective and democratic functioning of the country’s institutions, as a result of these elections. This includes the responsibility to follow the democratic principle of respecting the outcome of elections,” said the April 27 statement from EU High Representative Josep Borrell and Commissioner for Neighbourhood and Enlargement Oliver Varhelyi.

“Any alleged irregularities should be brought swiftly to the attention of the Central Election Commission and other competent authorities, and cases need to be duly investigated, including vote buying,” the officials added.

There are fears that should the opposition refuse to accept defeat, citing the shortcomings in the election process including the use of state resources by the ruling party, this could lead to instability and potentially violence, as well as further setbacks in Albania’s quest to start EU accession negotiations.

Albania has a history of violent protests, and the events following the 2009 general election offer a stark warning. That vote delivered a victory to the Democrats in the tightest race since Albania abandoned communism, after which the Socialists demanded a recount, with tens of thousands of people taking to the streets. Two years later, their defeat was still festering and clashes erupted between police and thousands of opposition supporters who turned out to demand the government’s resignation, resulting in three deaths.

Even if a violent response to the result is averted, the election could be followed by a boycott that would undermine the legitimacy of the parliament. Two years after the 2017 general election, that put Rama back in power for his second term, the opposition decided to relinquish their mandates. That left the Socialists in charge of a parliament with few dissenting voices, while the real opposition remained outside the parliament.

Election observers have noted the rhetoric used ahead of the election and Edlira Gjoni, director of the Center for Public Impact, Tirana, warned during an online panel discussion organised by the Institute for the Danube Region and Central Europe (IDM) on April 21 of comments made by certain politicians that they were prepared to “defend” the vote by whatever means needed.

“I was concerned about the incidents that have preceded election day and I want to underscore that incitement to violence will not be tolerated,” said Reinhold Lopatka, head of the OSCE Parliamentary Assembly (OSCE PA) delegation.

Gjoni argued that as election day approaches, leading politicians from the three main parties, as well as the president, are paving the way to challenge the result should it go against them. “Do I see red flags? All over and every day,” she commented.

In the days after the vote, dozens of challenges have already been filed with prosecutors.

There were two shootings of party activists in the days before election day, one of them fatal, and numerous physical clashes between supporters of rival parties. Even President Meta was involved in an altercation with Tirana police.

On election day, a man attacked a police officer with a knife at a polling staton in the town of Puke. Another man arrived at a polling station in Fier with a Molotov cocktail and threatened to burn the ballot boxes, but was removed by police. Also on April 25, a car broke through barriers and drove towards people gathered on Skenderbeg Square, but was stopped by a member of the crowd who made a daring leap into the moving vehicle. However, according to Albanian media reports the driver was high on drugs and the incident was not politically motivated.

As the votes were counted, tensions remained high. The Socialists have accused the opposition of delaying the count as opposition ballot counters took what the ruling party claimed were “excessive” breaks. Among several post-election confrontations, a mass brawl broke out between Socialists and Democrats at one polling station in Tirana.

Grounds to dispute the result?

While the result this time is not particularly close, opposition politicians looking for grounds to dispute the result are likely to be encouraged by the shortcomings listed in the report by the joint observation mission from the OSCE Office for Democratic Institutions and Human Rights (ODIHR), the OSCE PA and the Parliamentary Assembly of the Council of Europe (PACE).

In particular, the report said that members of the ruling Socialist Party took advantage of their official positions during the campaign ahead of the general election. “[M]any public figures continued to campaign during their official capacity. This, together with the launch of several large government infrastructure projects in the run-up to the election, gave the ruling [Socialist] party a considerable advantage,” said the statement from international observers on April 26.

There were also numerous allegations of vote buying and police in Durres said they had caught two people red handed with envelopes of cash on election day. There were several reports of attempts to photograph ballot papers, which is banned in Albania.

On the other hand, observers praised the “lively and inclusive campaign” that they attributed to the “legal framework that helped ensure respect of fundamental freedoms”.