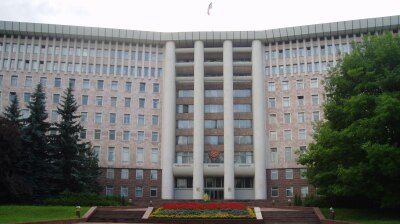 President Maia Sandu's PAS controls the parliament in Chisinau, but its progress with judicial reforms has been slow.
By Iulian Ernst in Bucharest October 19, 2022

Moldova’s President Maia Sandu on October 17 appointed 14 of the 40 judges nominated for a permanent term by the Supreme Magistrates Council (CSM) in April. However, by not pre-vetting the country’s judges, Moldova has wasted the opportunity to ignite its sluggish judicial reforms.

Sandu’s pro-EU Party of Action and Solidarity (PAS) has held the absolute majority in parliament since mid-2021. Reforming the justice sector was at the top of the agenda of the new government formed by Prime Minister Natalia Gavrilita, which inherited a system plagued by extreme levels of perceived corruption that made possible the notorious ‘$1bn bank frauds’, the Russian Laundromat and the so-called “raiding” of companies (illegal takeovers of firms involving the participation of corrupt judges).

Unfortunately, however, the reforms are going very slowly. Six years after the first review drafted by the Group of States against Corruption (GRECO) on Moldova’s justice system in 2016, only six of the 18 recommendations have been implemented, according to the third review issued in February this year.

The sluggish appointment procedure and the ambiguous criteria used by the presidency to reject some of the candidates has already created a bottleneck in the judiciary and left the reform process vulnerable to criticism — instead of serving as an example of what an effective and transparent evaluation procedure should look like, in contrast to the political interference often seen in the past.

Besides amending the legislation, the external evaluation of magistrates was the key instrument envisaged by the pro-EU authorities in Moldova.

Under constitutional provisions amended in April this year, judges in Moldova were appointed for a temporary five-year term, to be later confirmed upon evaluation by CSM, and with the final decision belonging to the president. However, the provision was scrapped as potentially leading to political control over judges.

While the proportion of “adequate” judges seems consistent with the perceived level of corruption in Moldova’s judiciary system, meaning Sandu has “graded on a curve”, the selection process needs to be much more objective in order to set a starting point for building credibility.

Of remaining 25 candidates (one of them died since the nominations), 13 have already been rejected and 12 may be rejected as they are still under scrutiny. The process remains in limbo, just like the judicial reforms that have not yet really ignited despite various steps taken. With the economy going downwards and prices upwards, this is another vulnerability for the pro-EU authorities.

Most of the rejected judges have already challenged the president’s decision, claiming they were not properly informed about the grounds for such a radical decision. And how could they be informed, when there is no evaluation procedure in the law — as President Sandu admits.

Elaborating on the assessments, Sandu was rather elusive about the process for evaluating the candidates, but she implied that it was a rather personal, informed judgement made in good faith based on data available and that there is no explicit mechanism indicated in the law. Not to mention a way for the candidates to appeal the decision.

But this was not what Sandu promised in October 2021, when her Minister of Justice Serghei Litvinenco announced that “all judges will be screened by foreign experts and those unable to explain their wealth will be fired”. Screening the 40 judges could have been a good starting point.

Unfortunately, other starting points might be missed soon: the trial of suspended head prosecutor Alexandr Stoianoglo (whose file was sent to court on October 17) and the handling of recent street rallies (seen by some credible NGOs as excessive). Polls already indicate that in an election the president's party would lose its absolute majority support — if anything like this exists among an electorate out of which half of the voters have no trust in politicians.

Notably, all the laws and procedures were adjusted (or could have been adjusted) in line with the PAS’ strategy, since it holds an absolute majority in parliament. The lack of an objective evaluation process for the judges is in this case rather awkward.

A certain degree of subjectivity can be acceptable when appointing head prosecutors, for instance, but not for career judges who should expect predictability. It is plausible that most of the Moldovan judges "don't deserve to be judges" in the president's words, but this needs to be explained in more detail.

Sandu made the comment back in May, when she announced 13 candidates were rejected. “In relation to some [rejected] judges, I think they do not deserve to be judges,” she told TV8.md. “For example, for certain decisions they made. Relative to other people, I question the fact that their reported income and their reported expenses are quite different … There is no mechanism in the law that allows me to ask candidates for explanations directly. I received information from the national anticorruption centre (CNA), the tax collection agency, from the national agency for integrity (ANI), I collected all this information, put it together and saw these discrepancies, including in relation to some people who are valued by civil society.”

Then on October 7, the first session of the pre-vetting commission heard the first three of the 24 candidates accepted for a seat in the CSM. In brief, it didn't bode well.

It was a good opportunity for the public (the hearings were published online) to know the members of the pre-vetting commissions and some of the candidates — but not much more. The talks covered rather trivial issues and involved rather small sums of money. The candidates that failed to meet the criteria were apparently rejected on procedural grounds from the preliminary stage of registration.

BALKAN BLOG: What Turkey’s Erdogan can offer the Western Balkans