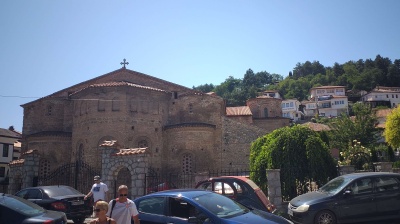 By Valentina Dimitrievska in Ohrid August 21, 2021

Summers on Lake Ohrid offer something for everyone: beaches, nightlife, cultural events and the many historical sites and churches. But increasingly there has been a conflict at North Macedonia’s favourite holiday spot between preserving its historical heritage and offering a destination for summer fun.

When North Macedonia’s authorities demolished lakeside bars and wooden piers at Lake Ohrid to comply with UNESCO recommendations, locals say the shoreside resorts lost their charm. Many believe the move was bad for the tourism sector, though with the country’s relaxed COVID-19 travel rules, Ohrid was still packed with visitors this summer.

Lake Ohrid and the city of the same name as well as the nearby Galicica mountain are among 28 UNESCO world heritage sites categorised in both the culture and nature categories. However, since 2019 the site has been threatened by the cultural organisation with being put on the list of endangered heritage sites, if the authorities failed to demolish 1,000 illegally built facilities, of which more than 400 were on the shoreline.

Following the repeated recommendations from UNESCO and under public pressure to keep Ohrid’s place on the world heritage list, the authorities rushed to do their job.

The mayor of Ohrid, Konstantin Georgieski, promised that all illegally built piers and facilities will be removed from the beaches for which concession agreements have expired.

"Illegal operation of beach concessionaires has ended and business interests will no longer be above the laws and interests of the city Ohrid. We remain committed to respecting the laws and fulfilling the UNESCO recommendations for the preservation of the World Natural and Cultural Heritage," the Ohrid mayor added.

After the improvised bars and piers were demolished, most of the beaches were quieter places; there was no more daytime beach partying and the loud music that provided a soundtrack to summers on the lake was gone.

One of the most popular beaches in the old part of the town, Potpes, which can be reached by walking across a long wooden bridge, looked completely different this year. There was no longer loud music from nearby cafe bars and or an opportunity for visitors to refresh themselves with beer or cocktails.

“The bars do not exist anymore, everything has been demolished because UNESCO requested it,” an Ohrid citizen, Klime, told bne IntelliNews. 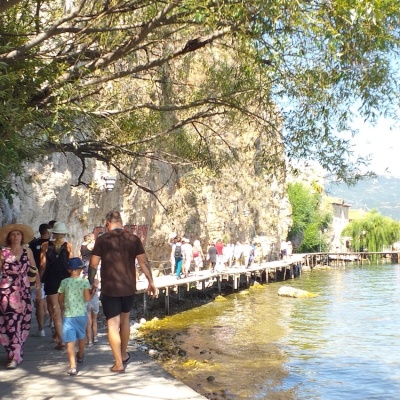 “The bars and wooden piers on other beaches along the Ohrid shoreline, such as the most popular Cuba Libre and Cadmo are also demolished, all that stuff built on the beaches has been demolished. That’s happening when outside factors dictates to us what to do,” he complained.

He explained that the beaches several kilometres from the downtown were operated by concessionaires, but after the concessions were not renewed now they are completely neglected.

Some tourist workers also believe that the demolition of attractive beach facilities could cause serious damage to tourism.

There was no dropping off in tourist numbers this year, however. Neither the loss of piers and beach bars, nor the coronavirus pandemic stopped tourists from all over the world flocking to Ohrid as restrictions in many countries were eased and entering North Macedonia is easy, without PCR tests or vaccination certificates needed, at least for now. 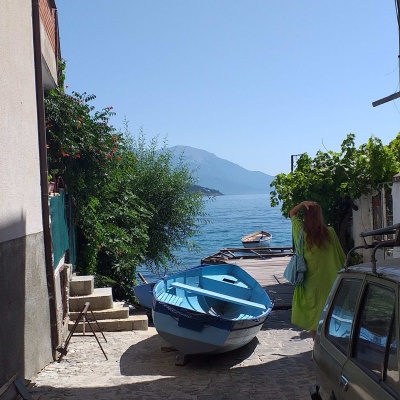 In mid-August, under the bright midday sun with air temperature of more than 35 Celsius degrees, the streets of Ohrid were almost empty. Meanwhile, nearby beaches were crowded, mostly with foreign visitors, some from as far away as China and other Asian countries.

“This is my second time to visit Ohrid. The first time I came here was eight years ago, but only for two days, now I will stay longer. It’s beautiful here,” a visitor from China, told bne IntelliNews. Local visitors from North Macedonia are frequent visitors to Ohrid and the number of Serbian tourists is also substantial.

However, some complain that the resort town is overcrowded during the peak of the season.

“Four small ships packed with tourists arrived in St.Naum [monastery and nearby beach] in the morning and there was no place at the beach anymore. I remember it as a tranquil place, so one can enjoy the peaceful atmosphere of the monastery, but this year was completely different,” Rade, a Skopje citizen told bne IntellliNews. There is no parking place in the city or near the beaches, he added.

The last warning from UNESCO came at the end of May, when the organisation said that the country’s authorities had done little to solve the existing issues in Ohrid, which may result in the city and the lake being listed as an endangered heritage site.

UNESCO cited the neglect of natural and cultural wealth, resulting in the gradual erosion of the city’s characteristics, as reasons to put the place in the endangered list.

It also said that there is a lack of awareness among the local population and authorities about the need to preserve their heritage, specifically the architecture in the old town.

The warning upset the authorities, both at central and local level, forcing them to start with the demolition of some of the illegally built facilities near the most popular beaches to met UNESCO requests

Ohrid, with over 40,000 inhabitants, is known for once having 365 churches, one for each day of the year, and is also called ‘Jerusalem of the Balkans’ and ‘the Balkan pearl’.

Situated on the shore of the lake, the town of Ohrid is one of the oldest human settlements in Europe. Built mainly between the 7th and 19th centuries, it is a home of the oldest Slav monastery, St. Pantelejmon, and more than 800 Byzantine-style icons. Three sites testify to the presence of prehistoric pile dwellings.

Lake Ohrid is an unusual natural phenomenon, with numerous endemic and relict freshwater species of flora and fauna dating from the tertiary period. As a deep and ancient lake of tectonic origin, Lake Ohrid has existed for approximately 2mn-3mn years, UNESCO explains.

A great number of archaeological sites testify to origins from the Neolithic period, the Bronze Age, the Macedonian Hellenistic period, the Roman and the early Middle Age period.

Historic and religious sites include the churches St. Jovan Kaneo, Saint Sofia and Plaoshnik in the beautiful old part of the city with narrow streets and unique architecture. Samuel Fortress, overlooking the old town, is another major tourist attraction. Built in the 11th century it was restored in 2003. Recent excavations showed that the fortress was built on the site of an earlier fortification, dated to the 4th century BC, which was probably built by King Philip II of Macedon.

The Bay of Bones is a museum and an archaeological complex located at the excavation site along the Ohrid coast, representing authentic reconstruction of the pile dwelling prehistoric settlement from the Late Bronze and Early Iron Age. Bay of Bones is a very popular day trip destination, as are the daily cruises to St.Naum monastery.

Pearls are another characteristic of the city. For most of tourists it’s a must to buy some pearl jewellery from Ohrid. Pearls are made of the scales of plasica fish (common bleak), an endemic species of fish in Lake Ohrid, and the production process remains a secret family tradition for more than a century and is inherited from generation to generation. Talevi and Filevi are the two best-known families that are involved in the traditional pearl business. 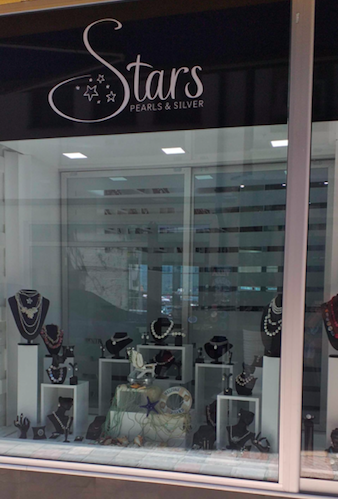 After spending time on the beaches or visiting monuments, tourists can enjoy food at the restaurants, including the famous dish local is Ohridska pastrmka (trout). At night, the DJs start to play at the cafe bars and clubs, and local and regional music stars arrive for concerts.

One more reason to visit Ohrid during the summer is the country’s biggest music and theatre event, Ohrid Summer Festival, which is traditionally held from July 12 until August 20 and it features a rich artistic programme.

This year more than 500 artists from 18 countries performed during the festival, with most of the events held in the old amphitheatre or St. Sofia church in the old town.

End of the season?

For visitors from North Macedonia and the region, Ohrid is never boring, even during the pandemic. However, as the number of new infections started to increase rapidly in the last few weeks and due to fears of spreading the Delta variant, the authorities imposed a requirement for tourists entering the country to show a vaccination certificate or PCR/rapid/recovery test. The measure will become effective on September 1.

Following the seemingly smooth season until mid-August, authorities also tightened measures for catering facilities amid the surging number of COVID-19 infections, which some fear that will ruin hopes of tourist workers that this year’s successful season would make up for the huge loss in the sector from the disastrous 2020.

As of August 16, only those with a certificate that they received at least one dose of COVID-19 vaccine or PCR/rapid/antibody test will be able to enter the open air parts of bar and restaurants and other events where more than 30 people are present, while the indoor parts of all facilities will be closed.