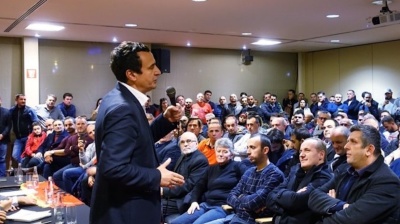 Two Kosovan opposition parties, Vetevendosje and the Democratic League of Kosovo (LDK), were on the verge of forming a government after together they secured half of the votes in the October election, a result that sent a clear sign that voters wanted a break with the past.

This was hailed by the international community as the first handover of power to the opposition in the history of Europe’s youngest country, coming 11 years after Kosovo unilaterally declared its independence from Serbia.

However, a November 14 Supreme Court ruling has changed the situation radically. The court ruled that over 3,700 ballots received from Serbia should be removed from the final election results, a decision that will allow the Initiative for Kosovo (Nisma)-led coalition to pass the 5% threshold and become part of the new parliament.

This in turn has reduced the number of MPs for Vetevendosje, the LDK and other parties that were already allocated seats in the new parliament. Having lost three Vetevendosje MPs and one LDK MP, the two parties no longer have the 61 seats they need for a majority in the 120-seat parliament, and will have to bring other parties — possibly the Nisma-led coalition — on board. Should they fail to do so, Kosovo could be heading for another snap election.

A recount of votes in more than half of Kosovo’s polling stations is also underway, and the final results of the election are not now expected until late November or early December, according to broadcaster RTK.

The Vetevendosje-LDK government was previously expected to be announced this month; such was the confidence that a coalition deal was imminent that Vetevendosje leader Albin Kurti had already met with international officials as he prepared to head the new government.

Despite reservations among the international community about Vetevendosje — the party grew out of a protest movement with a history of violence — officials from the UN, US and UK had hailed the anticipated handover of power.

The head of the UN Interim Administration Mission in Kosovo (UNMIK), Zahir Tanin, told the UN Security Council on October 31 that the election represented “the most significant change in the political landscape” in Kosovo in 12 years.

“Kosovo has voted for change,” commented David Clay, UK political coordinator at the UN, on the same day. In a similar vein, the US Ambassador in Kosovo Philip Kosnett said in an interview with RTV Puls: “I think the results make clear that people in Kosovo want change, all the people of Kosovo. They want a better future for their children,” according to the transcript published by the embassy.

Kosovo is one of the poorest countries in Europe, with rampant unemployment especially among young people, and a serious problem with corruption; it is ranked one of the most corrupt countries in Europe by Transparency International, on a par with North Macedonia and with only Albania, Belarus, Russia and Ukraine assigned lower scores on the 2018 Corruption Perceptions Index. Moreover, with five EU countries refusing to recognise Kosovo’s independence, unlike its neighbours in the Western Balkans it cannot aspire to membership of the EU — the prime driving force for reform in the region — until it manages to normalise relations with Belgrade.

The failure of successive governments to tackle corruption, poverty and unemployment led increasing numbers of voters to turn to Vetevendosje, which is seen as a political outsider, in both the 2017 and 2019 general elections.

Tanin highlighted this at the UN Security Council in October, commenting that: “The decision to call snap elections came at a time that was characterised by internal political division, a broken unity within the governing coalition and, most importantly, the public’s perception of inability to deliver on promises to the people of Kosovo … This change in the political environment was manifested in the decision of most voters to rally behind unconventional political candidates, who do not share the background or vision of past leaders.”

Vetevendosje has gradually moved into mainstream Kosovan politics from its origins as a protest movement. Its name, which translates as “Self Determination” refers to its goal of having international forces removed from Kosovo. The party has a controversial history: protests organised by the party have turned violent several times in the past, and more recently its MPs several times released tear gas in the parliament in an attempt to block the border delineation agreement with Montenegro.

By contrast, the LDK is part of the establishment as Kosovo’s oldest party, and had a brief stint in government alongside the PDK before their coalition collapsed in mid-2017.

While the parties have some common ground, it may prove difficult to forge a lasting alliance given their significant differences. What has pushed them together is that unlike the three parties that made up the former government neither is led by former Kosovo Liberation Army (KLA) fighters.

A Vetevendosje-LDK coalition would see the Democratic Party of Kosovo (PDK) excluded from government for the first time. The party has been at the heart of Kosovan politics since independence but was pushed into third place in the latest election, reflecting unhappiness with corruption and widespread poverty in the small country. The PDK’s former partners in the PAN coalition, also headed by former KLA fighters, that made up the last government were also set to move into opposition.

The continuing significance of the war of independence in Kosovan politics was highlighted in the 2017 election campaign, framed as the “Guns” versus the “Roses” as it pitted the parties led by former KLA fighters against those like the LDK that had advocated peaceful resistance to Belgrade. The division became more important when the Specialist Chambers set up to investigate war crimes committed by the KLA became fully operational in 2017.

“The KLA old boys have been forced into a pre-electoral tie-up by impending indictments from the Specialist Chambers, which will become fully functional in the coming months,” commented bne IntelliNews columnist Alex Young ahead of the 2017 election.

Since then the work of the Specialist Chambers has continued. The last government fell when Prime Minister Ramush Haradinaj was summoned to The Hague for questioning in a war crimes case. In November, a similar summons was sent for PDK leader and parliament speaker Kadri Veseli.

The exclusion of all three parties from the former government from the new ruling coalition would potentially facilitate the work of the Specialist Chambers — though other parties including Vetevendosje also have reservations about the process.

But what has been noticeable is the tenacity of the parties linked to the KLA in holding onto power in Kosovo.

Discontent with Kosovo’s political establishment has been rumbling for some time, leading to the large turnout for Vetevendosje in the 2017 and 2019 elections. Yet despite taking the largest share of the vote, Vetevendosje remained in opposition in 2017 as the “Guns” prevailed overall with the PAN coalition forming a government and installing AAK leader Haradinaj as prime minister.

Similarly, back in 2014 the LDK appeared poised to form a government alongside the AAK, Nisma and Vetevendosje, even though the PDK was the largest party in the newly elected parliament. Instead of giving way to the coalition of opposition parties that sought to take power, the PDK’s then leader (now Kosovo’s president) Hashim Thaci mounted a constitutional battle. After months of constitutional wrangling, the LDK instead agreed to form a government with the PDK.

Kosovans may have voted for change this time around but it’s unclear whether they will get it. Those who hailed the change in Kosovo ushered in by the 2019 election could yet see a return to the polls that may deliver an entirely different configuration in the parliament.