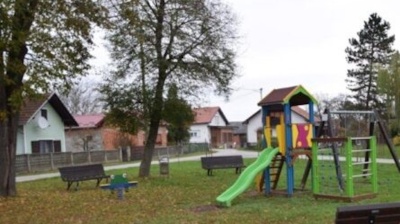 A newly opened children's playpark in Legrad, where the municipality is seeking to encourage young families to live. / opcinalegrad.hr
By Clare Nuttall in Zagreb November 10, 2021

A small town close to Croatia’s border with Hungary made the headlines this summer when it offered houses and building plots for just HRK1 (€0.13). The municipality of Legrad launched the measure to try to persuade young families to settle there; people can take advantage of the offer provided they are aged under 40 and commit to staying for at least 15 years.

Legrad’s population has approximately halved over the last century to around 2,250. It wasn’t always a border town in decline. Before the Austro-Hungarian Empire was defeated in the First World War and carved up, Legrad was a thriving market town, benefitting from its location at the confluence of the Mura and Drava rivers.

"After the Austro-Hungaran Empire fell in 1918 we became a border town. The border was closed, there was no merchandising and nobody was happy in our village,” the town’s mayor, Ivan Sabolic, told bne IntelliNews in a Zoom interview. Even the railway station built in the 19th century was lost, as when the borders came down it was on the other side of the Drava in what is now Hungary.

Worse came with the Second World War, when many of Legrad’s Jews were taken to concentration camps, and afterwards the Iron Curtain separated non-aligned Yugoslavia from Hungary. Even now, while Croatia, is an EU member, it is not yet part of Schengen. Prime Minister Andrej Plenkovic says Croatia hopes to join the borderless area in 2022. This would open up access to Schengen members Austria, Hungary and Slovenia, all within 80 km of Legrad.

“We believe that when we get into Schengen the situation will change, because only the river divides us from Hungary and we have a lot of connections with Hungarian people, Slovenian people, Austrian people … after that I believe the communication with other people in our region all be better and easier, and I hope we will get new inhabitants,” says Sabolic.

Meanwhile, the municipality is doing everything it can to persuade young people to stay and start their families and encourage others to move to Legrad.

Currently, the town has two problems, explains Sabolic. “First, we have a lot of houses and building lots owned by the municipality,” he says, citing the associated maintenance costs. Under Croatian law if a person dies with no successors or their successors renounce the inheritance because of debts, ownership passes to the municipality or city authority. Most years, five to 10 properties pass into the ownership of the municipality in Legrad each year.

“Secondly,” says Sabolic, “We lack population here, we lack workers, so we tried to talk to get new people to come to our municipality.”

The municipality uses various incentives to bring people to live there. First, there is the sale of houses or plots of land for HRK1, a scheme similiar to that launched by some small towns in Italy also looking to revive declining populations. Alternatively, people who buy homes or land from a third party can get a HRK35,000 grant to renovate them.

The first measure has brought 30 people to the town, while around 100 people took advantage of the second. “We are very satisfied, because we now have many more people in our municipality in just one year,” Sabolic says.

The mayor points out that while some came from as far afield as Pula or Slavonia, more than 200 km away, to start a new life in Legrad, not all are newcomers to the town. They also include, for example, young couples moving out of their parents’ homes to start their own family.

Some other municipalities have taken note of Legrad’s efforts, but according to Sabolic they have tended to cherry-pick parts of it such as extending funds to young people or offering free kindergartens. None have yet adopted such a wide range of measures.

While Legrad is a somewhat extreme example, the problems it faces are those faced by Croatia as a whole and other countries in the region, namely, a declining population and shortages of workers. Croatia’s entry to the EU was followed by large-scale emigration to West European countries, leaving companies, especially those in the tourism and construction sectors, struggling to find workers. The results of the country’s population census won’t be out for another few months, but statistics office data shows that the population has declined from 4.3mn in 2001 to just over 4mn in 2019.

Located near to the industrial cities of Koprivnica and others in Mejemuru County, Legrad has a low rate of unemployment. According to Sabolic, there are a lot of working places for people who want to come to the area, so many, in fact, that local companies have employed recruitment agencies who are bringing in workers from as far away as India and more recently Nepal – though most see Croatia as only a temporary place to work, not a permanent place to settle. On the other hand, companies from Germany come to the area to recruit Croatians for jobs in Germany.

“Irrespectively of the labour market stability during the crisis, it is evident that mismatches in the demand and supply of labour will continue to be present in some core industries. The government has already relaxed the rules on entry of foreign workers when related to skilled labour. The tourism industry was struggling even before the pandemic because it was not possible to satisfy demand locally,” Victoria Zinchuk, European Bank for Reconstruction and Development (EBRD) director for Croatia, told bne IntelliNews.

“If Croatia wants to retain a highly skilled workforce in the long term, it will need to create opportunities for higher value-added industries and services,” Zinchuk added.

“For me personally, in addition to enabling a better business environment, the priorities are to provide kindergartens, schools, hospitals and care for the elderly. Fundamentally, this basic infrastructure needs to be in place in order to allow young families to settle down, work, invest and promote the growth in the country.”

“As the recovery continues, we do not rule out that structural long-lasting issues such as low activity rates and jobs and mismatch between labour supply and demand could weigh in [the] shortage of labour force in certain sectors such as construction and tourism,” commented Zrinka Živković Matijević, chief economist at Raiffeisenbank Austria in Zagreb.

The latest Online Vacancy Index (OVI), a monthly index of online job advertisements developed by the Institute of Economics, Zagreb in co-operation with the web portal MojPosao, shows that as of October, labour demand in Croatia was 39% higher than a year earlier and 9% than in pre-pandemic October 2019. This was the sixth consecutive month in which labour demand was higher than pre-pandemic.

BALKAN BLOG: What living without Russian gas would mean for Moldova

BALKAN BLOG: The world has changed, it’s time for EU enlargement to change too

BALKAN BLOG: What living without Russian gas would mean for Moldova
BALKAN BLOG: Russia’s media manipulation keeps Serbs trapped in the past
BALKAN BLOG: The world has changed, it’s time for EU enlargement to change too