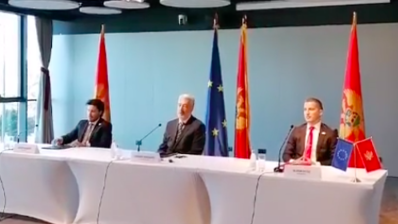 The opposition leaders about to take power in Podgorica.
By Clare Nuttall in Glasgow September 22, 2020

Montenegro’s new parliament will hold its constitutive session on September 23, the next step towards the formation of a new government after the August general election that for the first time in three decades won’t include President Milo Djukanovic’s Democratic Party of Socialists (DPS).

Instead, three opposition coalitions – bringing together around 20 small parties that span the political spectrum from right-wing nationalist to centre-left liberal – are set to form the next government, finally replacing the DPS that has ruled since long before the tiny country achieved its independence in 2006.

The new government will be made up of For the Future of Montenegro, Peace is Our Nation and Black in White that together will have 41 seats, the slimmest of majorities in the 81-seat parliament. While they announced the signing of a coalition agreement on September 9, they have yet to agree on a candidate for prime minister, though they have outlined the broad principles for their time in power.

According to the agreement posted on Peace is Our Nation’s Facebook page, the three coalitions have agreed that Montenegro will continue reforms necessary for its EU membership and strengthen its alliances with Nato members. In another sign it does not plan major changes to its external position, the coalition agreed not to withdraw the decision to recognise Kosovo as independent state.

The coalition also said it will not take revenge or pursue its political opponents and pledged to secure access to the ruling coalition for the parties of ethnic minorities even if they have not passed the threshold to enter the parliament. No changes will be made to Montenegro’s flag, anthem or coat of arms.

An ambition the new government is likely to struggle to achieve is to clear all key state institutions from political influence in order to carry out an effective fight against corruption and organised crime.

The government will also have to deal with the second wave of coronavirus (COVID-19) infections; in per capita terms Montenegro has been reporting some of the highest numbers of new infections in Europe. Hospitals are full to capacity in Montenegro’s second city Niksic and the town of Berane, though the authorities say the situation is under control.

The significance of the latest election is immense. Djukanovic became Europe’s then youngest-ever prime minister back in 1991, and since then has been either Montenegro’s president or prime minister for all but four years, twice returning to politics after announcing his retirement.

His party, the DPS, is the successor to the Yugoslavian-era League of Communists, but he has successfully changed with the times, steering Montenegro out of its union with Serbia, and pivoting westwards away from Russia to become a Nato member and the current frontrunner among the Western Balkans EU accession candidates.

“The importance of this government is that it doesn’t have the DPS in it. Even if it folds within a few months, the spell is broken,” said Cvete Koneska, director at consultancy SRM.

“I doubt there will be any other major achievements on the policy front, even if they last for four years in government, because it’s a coalition of such different coalitions and parties from across the political spectrum, none of which has experience in running a government. This in itself would lead to government instability. In Montenegro they are going to be running an administration and a state where the DPS is so well entrenched it will be difficult to move any part of that. So my expectations on what they can achieve on the policy front are quite limited. If they can move even a tiny bit on the anti-corruption front, so much the better, but it will be an uphill struggle.”

This is the first time in Montenegro’s history that all opposition parties managed to set aside their differences and unite, leaving the DPS with no chance to form another government. They were helped by the DPS’ misstep in taking on the powerful Serbian Orthodox Church. The church law, according to its critics, may strip the Serbian Orthodox Church – which remains the main church in Montenegro – of hundreds of religious sites, including medieval monasteries and churches. Adoption of a new law on religions at the end of 2019 sparked protests in Montenegro as well as ramping up tensions with Serbia.

The church issue also became conflated with the government’s handling of the coronavirus as efforts to stop mass religious ceremonies led to sometimes violent protests in the spring.

Ahead of the vote, Serbian pro-government media threw their weight behind the opposition, in particular the For the Future of Montenegro coalition that centres around the Democratic Front and is a pro-Russian, pro-Serbian, anti-Nato group of parties. Two of its leaders, Andrija Mandic and Milan Knezevic, were sentenced in 2019 for plotting a coup around the 2016 general election in collaboration with Serbian paramilitaries and members of the Russian security services.

The Democratic Front’s likely central role in the new government has raised concerns, despite the commitments publicly made by the three coalitions. For the three blocs about to form a new government, the “predominant narrative is: ‘out with the old, in with the new’; but a closer look at the parties and their leaders yields a more complex picture, one that could turn out to be destabilising for Montenegro and the region,” warned Sinisa Vukovic, a senior lecturer and associate director of the Conflict Management Program at Johns Hopkins University, School of Advanced International Studies (SAIS), in a comment for the European Council for Foreign Relations (ECFR).

Of the other two coalitions that will make up the new government, Peace is Our Nation is a pro-EU centre-right grouping that is also pro-Serbian. Its largest member is the Democratic Montenegro Party led by Aleksa Becic, a former leader of the Socialist People's Party, the Montenegrin arm of former Serbian dictator Slobodan Milosevic’s party. Another prominent figure is Miodrag Lekic, who ran as the Democratic Front’s candidate in 2013 presidential election; his party Demos later split from the Democratic Front.

The Black in White coalition, by contrast, is a centre-left formation, whose key party is the liberal United Reform Action (URA) movement led by ethnic Albanian Dritan Abazovic. Another important figure is businessman and former deputy prime minister Zarko Rakcevic. Ideologically, URA is closer to the DPS than to its new partners.

For the Future of Montenegro has 27 seats in the new parliament, Peace is Our Nation 10 and Black in White four. (The DPS remains the largest party with 30 seats.) Parties representing Montenegro’s Albanian and Bosniak minorities may also decide to join the new government.

The change of leadership in Podgorica was welcomed by Montenegro’s Western partners. As the final results were confirmed on September 14, US ambassador Judy Rising Reinke called the election a “historic moment for Montenegro’s democracy”. Previously, EU High Representative/Vice-President Josep Borrell and Enlargement Commissioner Oliver Varhelyi commented on September 1 on the amount Montenegro has to do post-election. “[T]he months ahead must be used to deepen and speed up political and economic reforms, particularly on the rule of law area,” they said.

This seems rather optimistic given the diverse range of viewpoints brought together by the new coalition and the resistance any changes are likely to face from the state administration — and not least from Djukanovic, whose latest term as president will continue until 2023.