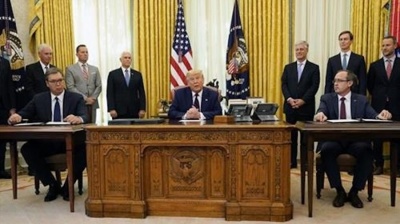 The US-brokered economic normalisation deal struck earlier this month between Serbia and Kosovo – heralded by the White House as a “historic” agreement – has confirmed that it is in fact the outstanding political issues need to be tackled if any real progress towards ending the long-standing deadlock can be achieved. Talks aimed at achieving a negotiated solution are now underway again in Brussels, but it’s clear there is no easy way out.

The US’ involvement in the dispute between the two Western Balkan countries was revitalised with the appointment of Richard Grenell as US President Donald Trump’s special envoy. This came after efforts from both Washington and Brussels had flagged. The EU especially had been distracted from the Western Balkans and the enlargement process by internal conflicts over migration and the questions Brexit threw up about the union’s future.

Perhaps acknowledging that a political solution would be elusive, Grenell has talked previously about economic normalisation and improved living conditions being the key to finally resolving the conflict. “[W]e, the United States, feel very strongly that this 20-year fight between Kosovo and Serbia is only going to be solved through economic normalisation,” Grenell said in an interview with Kosovo’s Gazeta Express in June. He added that the second phase of the process, led by the EU, should happen only after economic normalisation.

The Washington summit between Serbian President Aleksandar Vucic and Kosovan Prime Minister Avdullah Hoti on September 3-4 – postponed from June when Kosovo’s President Hashim Thaci was indicted for war crimes the day before it was originally due to take place – was therefore billed ahead of time as a chance for a breakthrough on economic matters. On September 4 two separate but similar deals were signed by the two states in the White House.

On the economic front, they agreed to implement road and rail deals already agreed back in February, and there were also commitments of US funding for the Peace Highway from Serbia’s Nis to the Kosovan capital Pristina, two rail links, and support for lending to SMEs and unspecified “additional bilateral projects”.

There has already been follow-through on the funding for the Peace Highway as letters of interest were signed with the Development Finance Corporation (DFC) in the US and the Export-Import Bank (EXIM) on September 15. The two institutions plan to send delegations to Belgrade and Pristina at the end of this month to advance the work on the Peace Highway and other projects.

Another positive to come out of the meeting was Kosovo’s inclusion in the “mini-Schengen” zone, a regional co-operation initiative launched by Albania, North Macedonia and Serbia, though it’s not clear how much impact this will have in practice.

Yet while any progress towards a rapprochement between the two sides is clearly positive, especially one that brings investment to the region, the economic deal was far from the historic breakthrough its supporters claim, as it left the political situation unaddressed. In fact, where the deal ventured to the political space that it sparked an immediate backlash.

Opposition politicians in Pristina were quick to complain that it threatened to undermine Kosovo’s sovereignty: it included a commitment that Kosovo refrain from pursuing membership of international organisations for one year, and plans to work with the US Department of Energy on a feasibility study for sharing Gazivode/Ujmani Lake, most of which lies within Kosovo.

Moscow was clearly unhappy with the deal as foreign ministry spokesperson Maria Zakharova sparked an angry reaction from Belgrade when she mocked President Aleksandar Vucic in a Facebook post. The controversial post juxtaposed a picture of Vucic sitting in front of US President Donald Trump’s desk with the notorious shot from the film Basic Instinct showing Sharon Stone crossing her legs while being questioned. “If you were invited to the [White House], and the chair was put as if you were in interrogation, sit down as in photo #2 Whoever you are. Just believe me,” Zakharova wrote. She later backed down, claiming the post had been “misinterpreted”.

The deal also put Serbia in a difficult position vis a vis another ally, China as Washington brought its trade war with China and efforts to push Chinese Huawei out of Central and Southeast Europe to the table. While the agreements didn’t refer to Huawei by name, the two parties committed to “prohibit the use of 5G equipment supplied by untrusted vendors in their communications networks”. Shortly after the Washington summit, Huawei opened an innovations and development centre in Serbia’s capital Belgrade. Serbian Prime Minister Ana Brnabic said at the opening ceremony that she had discussed the planned launch of a 5G tender with Huawei and China’s ambassador to Serbia, Chen Bo, and had agreed the future tender should be open and transparent.

Middle Eastern politics were also dragged in: Israel will recognise Kosovo and both sides have agreed to open embassies in Jerusalem, a problematic move given they aim to join the EU.

“[T]he summit has not only failed to achieve any meaningful breakthrough in Kosovo-Serbia relations; this much vaunted diplomatic showpiece has somehow left both parties essentially worse off,” according to commentary from the Balkans in Europe Policy Advisory Group (Biepag).

The point that the political rifts in the region must be addressed and that economic integration is not enough to effect change is made in a new report from Bertelsmann Stiftung and the Vienna Institute for International Economic Studies (wiiw). The study looks at efforts to promote political reconciliation through regional economic co-operation in the region over the last two decades, which, it says, has produced “disappointing” results.

“After two decades, it is clear that the EU’s hopes of driving political reconciliation via economic integration in the Western Balkans have not been fulfilled,” according to the study, Pushing on a String? An evaluation of regional economic cooperation in the Western Balkans. It argues that “further regional economic integration is unlikely on its own to drive progress in solving constitutional and territorial disputes in the region, nor will it significantly increase development levels.”

Partly the problem is the slow progress on regional economic integration. It adds that many of the key pre-requisites for effective regional co-operation never existed in the Western Balkans. Regional economic integration, for example, has been patchy despite a 37.7% growth in intra-regional trade resulting from the Central European Free Trade Agreement (CEFTA) since 2007.

Serbia, the biggest economy in the region, has integrated less economically with the other Western Balkans countries, instead building economic integration with third countries, mainly EU members. And rather than converging with the Central European countries that joined the EU in the 2000s, the Western Balkans have mostly fallen further behind economically, and they have never managed to attract major international investors on the scale Central European countries did before their accession to the EU.

But even if economic integration and convergence with the EU is improved, this does not address the political situation. “Ultimately, economics can only provide part of the answer,” say the report’s authors. “The settling of open constitutional disputes, agreement on territorial questions and the normalisation of relations between all countries of the region are also central pre-requisites to effective regional co-operation in the Western Balkans.”

This will be left for the EU to continue with its very gradual political normalisation negotiations that have continued in a stop-start fashion for years since the landmark Brussels Agreement of 2014. The two sides were at least brought back to the negotiating table this year after a change of government in Pristina saw the immediate and wholesale lifting of the punitive 100% tariffs slapped on imports from Serbia and Bosnia & Herzegovina back in 2018. And EU envoy Miroslav Lajcak has taken a positive stance, saying that a political agreement could be reached within months.

Yet there is no clear solution to the most critical divisive issue: Serbia’s refusal to recognise Kosovo as independent, and Kosovo’s insistence that no normalisation of relations can come without recognition.