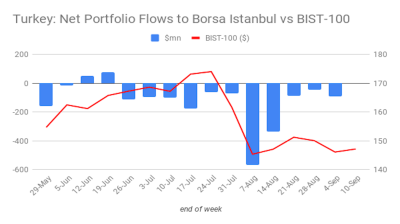 As this publication has been at pains to point out lately, with the Borsa Istanbul it’s no longer a case of think twice before venturing in, but think thrice.

Foreign investors—in reality either foreigners or Turks, but in any case institutional investors able to move stock prices—were for almost two decades the dominant players who determined the direction of the Istanbul stock exchange. Simple trading ideas were in play, such as buying stocks sold by the foreign investors from dips and awaiting the return to the market of these investors in order to sell the shares back to them.

However, more or less since the start of this year, these cycles no longer function the way they did. The foreigners, including “long-termers”, have been constantly selling and exiting—and it is unknown at the moment when the day will come that they will return to buy.

The locals are getting used to the idea of trading among themselves, but it’s rather difficult to “set the game” against a backdrop that includes the massive foreign capital leakage, the well-known “invisible hand” of the government that keeps the benchmark BIST-100 above the 1,000-threshold no matter what and latest slide of the Turkish lira (TRY) that almost day by day sends it to fresh all-time lows against the dollar.

Turkey’s big football clubs are, as they just about always have been, in crisis amid a sea of huge debts and shares in them are always speculative, but Besiktas (BJKAS) and Galatasaray (GSRAY) remain part of the benchmark BIST-100.

The removal of the football club shares from the dance did not, however, result in a decline to below 1,000 on the BIST-100 as might be expected since others up to their eyeballs in debt, due to FX-denominated debts versus lira-denominated incomes, namely the electricity producers (XELKT) along with sole major Turkish petrochemical producer Petkim (PETKM), who saw share price gains thanks to helpful “official” comments on Turkey’s supposed big natural gas find in the Black Sea (banking on this turning into substantial production any time soon would be highly speculative, but you wouldn’t know it from what’s being said by the government mouthpieces—suffice to say, it’s garbage).

Shares in largest Turkish oil refiner Tupras (TUPRS) also leapt when the natural gas theatre was staged—that provided a great opportunity for foreigners to sell and flee at better share prices as well as at a better USD/TRY rate.

The electricity producers, also staring down the barrel at seemingly incurable debts, can, meanwhile, fairly point to their natural gas plants. But they can hardly claim it is a purely organic and non-manipulated market reaction when there is a rush into their stocks on “official” rumours leaked to market-making global news services of some as yet unproven natural gas findings.

These newswires do so love these “official” stories. They stroke the newsroom egos and create volatility in the markets that leads to either trading opportunities or a whetting of appetites. But there’s no investigative journalism here. The impression may be one of dragging “real” information held under wraps by the government from important officials. But generally speaking, in Turkey these officials only give away what they think is to their advantage. That’s usually the real story.

Back with where the market is heading and in the week ending September 4, the free-float of airport operator TAV (TAVHL) saw the biggest decline in terms of shares held by foreign investors, while flag carrier Turkish Airlines (THYAO) and airline catering company Do&Co (DOCO) remained among the stocks most sold by foreigners (chart below from Is Invest online analysis tool).

From September 4 to September 10, the foreign brigade kept selling TAV while Turk Telekom (TTKOM) was also among the top sold stocks (chart below).


As of September 11, government-run Emlak REIT (EKGYO) was the most active stock on Borsa Istanbul looking at the last three months while Petkim, electricity producers and many companies you'd never suspect of making a splash were also present (table below).

The net asset value of the most popular Turkey exchange-traded fund (ETF), the Nasdaq-listed and USD-denominated iShares MSCI Turkey ETF (TUR), rose from $177mn as of September 8 to $183mn as of September 11. But it still compared lower than the $198mn recorded as of March 31 and the $380mn seen as of February 10.