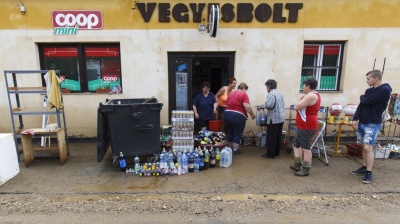 The number of shops operating in Hungary continued to drop in the first half of 2019, extending declines of the past few years, according to figures from the statistics office KSH on November 22.

There were 120,500 stores operating across the country at the end of June, which is 2,000 fewer than in the same period of the previous year. Hungary's economy has been growing at a steady pace in the past two years fuelled by strong domestic consumption. Even the dynamic increase in spending was not enough to stop the decline in the number of shops.

Data from the statistics office showed that around 150,000 shops operated before the crisis in 2008.

Smaller shops have trouble financing rising wages and have been hit by the migration of workforce to larger, multinational retailers.

The number of stores specialising in clothing, other commodities, paints, hardware, DIY and building materials, as well as bookstores, newspapers and stationery has fallen spectacularly.

The government has introduced a ban on the construction of stores of 400sqm or more from 2013, aimed at curbing the spread of foreign retailers. Nevertheless, multinational retailers and hard discount stores such as Aldi, or Lidl have made headways buying up closed shops and renovating them.

Stiff competition and rising wages were not the sole factors behind the decline in the number of smaller stops.

According to an earlier assessment of the statistics office, the establishment of national tobacco shops, the launch of online cash registers, and the temporary ban on Sunday shopping also had a negative impact.

Hungarian retail stores are bracing for a strong holiday season with the turnover expected to reach HUF1.2 trillion (€3.6bn), up from HUF1.14 trillion last year, according to estimates by retail trade association (OKSZ). Its president Gyorgy Vamos said that are 6,000 workers missing in the sector.

Companies are in a rush to take on hundreds of seasonal workers in the coming weeks to cope with the dire labour shortage. Consultant BDO put the number of vacant job positions at a national level at 250,000, up from 200,000 a year ago.