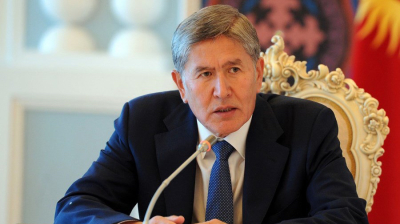 If Kyrgyz citizens did not take the arrest of opposition leader Omurbek Tekebayev a month ago as a harbinger of ills, they cannot have missed the import of the many disturbing events that followed.

Over the span of just a month, Kyrgyz President Almazbek Atambayev has managed to backtrack from promising to leave politics for good at the end of his term, to vowing not only to continue working with his Social Democratic Party (SDPK), but to also dismiss the parliament before his departure from office.

Among other warning signs that Kyrgyzstan’s democratic development is imperilled, the Kyrgyz authorities went ahead and arrested another opposition leader Almambet Shykmamatov, a member of Tekebayev’s Ata-Meken party. And when self-exiled former politician Sadyr Zhaparov – who in 2013 was charged with taking a government official hostage – returned to the country, supposedly in order to participate in the election, the Kyrgyz security services nabbed him too. Police with stun grenades dispersed resulting protests mounted by his supporters.

Allegations of corruption have been directed against at least six high-profile figures over the past two months, the latest being pro-government lawyer Muzaffar Isakov. No stranger to placing bans on the media, President Atambayev has also announced his preparedness to pursue allegations of slander against Radio Free Europe/Radio Liberty’s Kyrgyz Service all the way to the “international courts”.

These developments, coupled with Atambayev’s earlier constitutional manoeuvres in December, have lent weight to the theory that even if the president does leave office, he still hopes to maintain unofficial control over the country from the shadows by installing a puppet as prime minister. But having influence over a prime minister might not be enough, according to Kyrgyz experts.

Kyrgyz independent political analyst Edil Baisalov does not even exclude the possibility that Atambayev wants to provoke some sort of massive riots, which would allow him a chance to extend his term. “None of the other political forces are interested in spreading unconstitutional activities,” Baisalov tells bne IntelliNews. “The main source of destabilisation [in the country] right now is Almazbek Atambayev.”

“Atambayev is leaving the presidency; he is running out of time; he does not have a successor and even if he would declare one tomorrow or within the next months, this candidate would simply have no chance of becoming president as a result of free and fair elections,” Baisalov adds.

If Baisalov is correct, Atambayev, a participant of both Kyrgyz revolutions – which respectively toppled Askar Akayev’s regime in 2005 and Kurmanbek Bakiyev’s regime in 2010 – is well aware of the cracking of thin ice under his feet. Russian political analyst Yuri Kurnosov writes that “in the two previous cases, in 2005 and 2010, the presidents of the Kyrgyz Republic were betrayed at the most crucial moment by persons similarly loyal to them,” and notes that Atambayev presently has even less allies than his predecessors did when they were driven out of the country amid massive and violent protests.

Atambayev has himself remarked that he would like to clean up the ranks of his own party, thus revealing his distrust of his apparent allies. “I’ve spent a lot of energy on [the party], I want it to be cleansed and refreshed, and for this I do not need to occupy any [political] position," he declared on March 24.

The Kyrgyz president has even angered former friends from the 2010 revolution. His public criticism on Independence Day last year of Roza Otunbayeva, who led the interim government after the 2010 revolution, led to her storming offstage.

The lack of any consistent support from among the elites does not seem to deter Atambayev from ratcheting up the political tensions in the country. On the contrary, he pushes the claim that he has the support of “77-78% of the country’s population”, something which he stated on March 24 citing a Gallup poll. However, he seems to forget that his own party took a mere 27.56% of the vote in the 2015 parliamentary elections, despite coming first.

“The third revolution should not take place this spring, but it can and will happen if Atambayev attempts to prolong his stay or appoint a successor through election fraud,” Baisalov concludes.

Kurnosov argues that all of the steps taken by Atambayev within recent months echo the pre-revolutionary scenarios of both Bakiyev and Akayev; so there are no guarantees that Atambayev won’t join the Exiled Kyrgyz Presidents’ Club.

Kyrgyzstan, it appears, is at a crossroads. A dictatorial path beckons and the country risks becoming cemented as a failed state. Some, however, are so pessimistic they think it has already got there. “Kyrgyzstan is right now a failed state,” one dismayed Kyrgyz activist remarked to  bne IntelliNews.

Such worries are engraved in the reports of international observers such as Freedom House. The democracy and human rights watchdog concluded in its Nations in Transit 2017 assessment that Kyrgyzstan, a nation of six million people once praised as an "island of democracy" among Central Asia's assortment of autocratic and dictatorial states, must now be classified as a “consolidated authoritarian regime”.

CAUCASUS BLOG: But Mr Pashinian, Putin may not want the new “ancient Greece” on his doorstep…