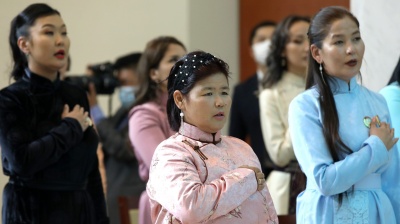 The incumbent Battulga introduced a 'hand on heart' rule that applies during the playing of the national anthem. Pictured are Ulaanbaatar mothers this week awarded "Mother's Glory" medals by the president. / Mongolian Presidential Administration.
By Anand Tumurtogoo in Ulaanbaatar June 8, 2021

Mongolia goes to the polls on June 9 to vote its sixth president into office. The election heralds a new chapter in the country’s presidency as the new president will have curtailed powers and will only be permitted to serve one term.

The incumbent, Battulga Khaltmaa, a businessman and former wrestler and a president who opposed many of his predecessor's policies, such as abolishing the death penalty, is unable to run for re-election due to constitutional amendments brought in during 2019 that prohibit former presidents from running for a second term. Presidents from now on will be limited to one term of six years, compared to the previous term length of four years.

Battulga, who made it standard practice for Mongolians to put their hand on their heart during a performance of the national anthem, still has a significant number of supporters who would have chosen him over the three main candidates that are running. Elderly voters, for instance, seem to like him for his machismo and his proposed law that would grant payouts on pension-based loans.

The amendments mean a president must be at least 50 years-old, as opposed to the age of 45 that was the previous threshold, Also, the office holder loses current powers such as the rights to nominate the head of the anti-corruption agency and appoint chief judges and all the members and heads of the Judicial General Council and the Judicial Disciplinary (Ethics) Committee.

Why even have a presidency?

The question arises: why even have a presidency? Even before the new amendments, the president did not have executive powers and was limited to proposing laws and vetoing decisions of parliament, with the legislature anyway able to override a veto with a simple majority. “Well, the president is a person who can be balanced amid political strife; he or she can end a deadlock and be the middle person between the opposing sides, and that was the initial purpose of the presidency,” Badamdash Dashdavaa, a political scientist at the National University of Mongolia told bne IntelliNews.

However, Battulga is widely seen as having subverted his role as a unifier and even as having undermined democracy by taking an aggressive and capricious approach to appointing and suspending important constitutional players such as judges.

The constitutional amendment barring an incumbent from pursuing re-election was initially to take effect in 2025, but during their ratification of the reshaped constitution, members of parliament decided that it would instead apply from May 25 this year.

A furious Battulga responded by trying to ban the current ruling party, the Mongolian People's Party (MPP). He even threatened to start a coup; ironically, his justification for some of his outlandish moves is that, in his eyes, the country is becoming a dictatorship, something that his party, the Democratic Party (DP), took up as its presidential slogan.

Critics have said that instead of fighting with his opponents, Battulga should have helped to unify the DP. It splintered in March when two factions claimed that they represented the legitimate democratic party. The turmoil produced a head-on collision when both factions nominated a candidate to run for the presidency. The faction that lost, on a technicality that rendered it “illegitimate”, announced a hunger strike, even accusing the Election Committee of being shills with no integrity. This might have hurt the DP, as the general public does not seem enthusiastic about buying into the DP’s slogan of “Mongolia without a dictatorship, a democratic Mongolia”.

Uyanga Sod, a 22-year-old who recently graduated from university, remarked to bne IntelliNews that “Mongolia is not going to become a dictatorship; there are countries like Japan with one-party rule, they are not dictatorships.” A meat vendor, meanwhile, who did not disclose her name, commented: “This country needs a dictator to put it back into shape, just like [with ex-president Nursultan] Nazarbayev [of Kazakhstan].”

Looking at the candidates, some people have criticised the DP candidate for president Sodnomzunduin Erdene for running. Another meat vendor, Galsan Erdenesukh, 37, said: “I am not going to vote in this election, I voted Battulga in the last, and I would have at least preferred Altankhuyag [Norov] over Erdene [as DP candidate].”
It was Altankhuyag and six other members of the riven DP that mounted the hunger strike, opposing Sodnomzunduin of the rival party faction.

Person who brought the internet

The infighting might have bolstered the third party, The Right Person Electorate Coalition (RPEC). It has nominated Enkhbat Dangaasuren, a computer engineer and businessman who is known as the person who brought the internet to Mongolia. He’s also known as a politician who has been through previous memberships of many parties, including the MPP.

Enkhbat appeals to many of Mongolia’s younger voters and to the affluent crowd as he is the only candidate that has a Ph.D. and he speaks English and Russian. However, it should be noted that RPEC only won 5% of the vote in the 2020 general election and has only one seat in parliament, while Mongolia’s youth, in the demographic age bracket of 18-25, barely made up 50% of those who cast their ballots.

Enkhbat has run an aggressive online campaign, buying out ad spaces on a few most visited websites in Mongolia. However, on June 6, a spanner got into the works when his campaign notified the public that he and his wife had contracted COVID-19.

MPP candidate Khurelsukh Ukhnaa, who turns 53 on June 14, is the youngest candidate. He is representing a political party that is the oldest party in Mongolia and which is celebrating its centenary.

Khurelsukh served as prime minister until he abruptly resigned in January after a public controversy over a hospital’s mishandling of a COVID-19 patient and her newborn child, something that was linked back to government policies on how to address the pandemic. Khurelsukh became the third Mongolian prime minister who served more than three years. The average term of office for a PM in the country is just 1.9 years. This partly arose from the ability of parliament to oust a prime minister with a simple majority, but among the constitutional amendments is one that means an absolute majority is now required for such a dismissal.

Khurelsukh, like Battulga, is seen as a strongman. He has idolised Russian President Vladimir Putin, even arranging a Putinesque photoshoot in which he was bare-chested on a horse.

It was thanks to Khurelsukh that Battulga achieved the presidential powers that during 2018 were often described as undermining democracy, and it was thanks to him again that Battulga was able to grant payouts on loan-backed pensions—the IMF protested that they violated its 2017 bailout deal for Mongolia.

Some would say that Khurelsukh had something of a bromance with Battulga, but during the first national coronavirus lockdown, the president proposed cash handouts to citizens of upwards of around $400, and that brought about conflict. Khurelsukh’s government opposed the proposal, instead offering utility bill payments from the government running from December 2020 to July 2021. Khurelsukh then accused Battulga of instigating the January COVID-19 demonstrations over which he stepped down, conveniently in the view of some observers, as the resignation paved his way for a stab at gaining the presidency.

Khurelsukh is indeed favourite to win the presidency and his rhetoric ahead of the vote seeks to stir epic notions of Mongolia, seemingly attempting to revive the spirit of the revolutionaries of 1911 who delivered Mongolia its independence from the Qing Empire, or even that of Ghengis Khan, the first Great Khan, or Emperor, of the Mongol Empire. Elevating patriotism, Khurelsukh declared at a June 6 election rally: “This year’s presidential election has historical significance. We will celebrate our Republic’s Centennial, this is the 60th year since Mongolia became a member of the UN, it is also the 2,230th year since our first state came to be. And I believe all of these momentous occasions coinciding with this year’s presidential election makes this a very blessed occasion.”