CENTRAL ASIA BLOG: Why Tajikistan and Turkmenistan said no to a Central Asian ‘Visegrad Group’ 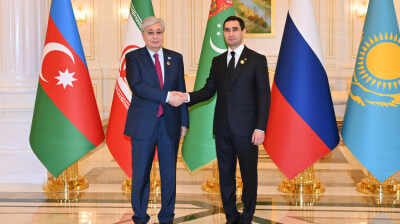 Kazakhstan's Kassym-Jomart Tokayev (left) found his hoped for deal on unity blocked by Turkmenistan's Serdar Berdimuhamedov (right), as well as by Tajikistan's Emomali Rahmon. / Presidency of Kazakhstan.
By Nizom Khodjayev in Nur-Sultan July 25, 2022

Kazakh President Kassym-Zhomart Tokayev's bid to promote regional unity via signing a historic deal with the other four leaders of Central Asian states fell flat last week when the Tajik and Turkmen presidents refused to sign a proposed “historic” deal on friendship and cooperation at a regional summit held in Kyrgyzstan.

There are those who speculate that the anti-climax was somehow related to machinations of Moscow—given the geopolitical and economic realignments under way as a consequence of the Ukraine war, it is tempting for analysts to link any such developments to the Kremlin in such a fashion—but Kazakhstan originally announced the idea for the agreement in 2019, with the COVID-19 pandemic then forcing the five nations to postpone final consideration of the deal. What’s more, if all five of the Central Asian nations were to agree the deal, it might perhaps be to Russia’s benefit as it would provide for greater, albeit indirect, access and influence with the three of those countries that are not part of the Moscow-led Eurasian Economic Union (EEU), namely Uzebekistan, Tajikistan and Turkmenistan.

The agreement, signed by Kazakhstan, Kyrgyzstan and Uzbekistan at the summit, forms part of Kazakhstan’s plan to boost regional connectivity, with Central Asia, for instance, retaining infrastructural links left over from the times of the USSR. One of Tokayev’s hopes for greater cooperation is a strengthening of Central Asia’s links to South Asia as the Central Asia 'Stans' already maintain strong links to China in the east and Russia in the north. The region is also strengthening its trade ties with the West, bypassing Russia via the Caspian Sea, amid the war in Ukraine and the impacts of international sanctions against Moscow.

“Central Asian economic cooperation may well become, if not the main, then at least one of the key sources of growth of our national economies,” Tokayev said during the summit. “It is important to establish close cooperation to eliminate structural and infrastructural constraints.”

When Tajikistan and Turkmenistan opted out of signing the deal on unity on July 21, Kyrgyzstan explained that the two countries needed to tackle various internal procedures before they could sign it—an unlikely prospect given that all decision-making power ultimately rests in the hands of the presidents in the two authoritarian countries.

"For them, 'domestic procedures' don't play any role. If they were genuinely interested in this agreement, they would have signed it then and there," Alisher Ilkhamov, an analyst at the British-based Central Asia Due Diligence, told RFE/RL.

Turkmen President Serdar Berdimuhamedov and, before him, his predecessor and father, Gurbanguly Berdimuhamedov, have shown little enthusiasm for regional integration initiatives and treaties over the years, with the remote country attempting to maintain what it calls “political neutrality” sold by the Turkmen leadership as a form of political and economic independence and self-sufficiency. As such, tightly controlled Turkmenistan has never joined any of the major regional groupings, including the Commonwealth of Independent States, the EEU, the Collective Security Treaty Organization (CSTO) and the Shanghai Cooperation Organisation (SCO).

Observers saw Tajik President Emomali Rahmon's refusal to sign the new agreement as an ex​​tension of the longstanding border dispute between Tajikistan and Kyrgyzstan that has become increasingly  violent in recent years, with clashes between citizens and border guards alike killing dozens of people and displacing thousands. Around 35% of the countries' shared 970-kilometre-long border is yet to be demarcated—a legacy of the Soviet Union.

While Tokayev offered to assist the Kyrgyz and Tajik governments in finding a peaceful solution to their border dispute, the authorities of both nations have repeatedly voiced intentions in the past few years to resolve the issues directly without any outside interference.

Overall, the failure to kick off what some observers have referred to as Central Asia’s loose equivalent of Central and Eastern Europe's Visegard Group does not come as too much of a surprise. Even in the best case scenario, where Tajikistan and Kyrgyzstan eventually settle their differences, such an alliance would still at most succeed in harmonising the economies of only four of the five Central Asian states. Turkmenistan would have to see a major switch in its trajectory before it agreed to enter any group pursuing regional synchronisation.