CONFERENCE CALL: IIB looks ahead to the next five years 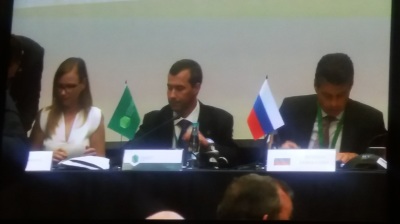 Delegates from the IIB member states approved the bank's new five-year strategy and signed several deals at the council meeting in Bucharest.
By Clare Nuttall in Bucharest June 28, 2017

It’s been five years since the chairman of the International Investment Bank (IIB) decided to turn around the then moribund development bank, whose activities had tailed off since the collapse of communism in Eastern Europe.

Under Nikolay Kosov's leadership the bank started to reinvent itself, taking on new staff and adopting a risk management system in line with international best practice that helped it secure its first investment grade ratings.

Five years on, the Moscow-based bank’s shareholders — nine former and current communist countries from Vietnam to Cuba — adopted a new five-year strategy at its June 27 council meeting in Bucharest. The strategy, that will take the bank through to the end of 2022, is aimed at doubling its assets while maintaining the quality of its investments. The IIB also plans to diversify its loan portfolio and expand the geography of its operations — a process that is already underway with the admission of Belarus as the first sovereign state to be granted observer status with the bank.

“The main outcome is the adoption of a new mid-term strategy, which determines the IIB’s growth not only for the next five years but also for a much longer period of time,” Kosov commented at the business forum that followed the bank’s council meeting.

“We should also achieve a much high lever level of institutional maturity and financial stability, and play a greater role in attracting investment to member states, to diversify our range of products and make them more suited to the needs of our countries and customers,” he added.

Romania in the spotlight

One member that has been playing an increasingly important role in the IIB’s activity is Romania. As well as hosting the latest IIB business forum, Romania was also the location of the bank’s first local currency bond outside Russia. It raised RON111mn (€25mn) in its debut placement on the Bucharest Stock Exchange in 2015, following this up with an over-subscribed RON300mn bond the following year. Romania, along with Russia and Slovakia, are currently the only countries where the bank has issued local currency bonds.

“We consider Romania as one of the very promising member states in the EU region with a truly great potential,” said Kosov. “We have great plans for activities on the Romanian debt market.”

Part of the forum focussed on the Romanian economy, which has emerged as the fastest growing in Europe, as stressed by Attila György, secretary of state at the Romanian ministry of public finance, who forecast more than 5% GDP growth per year in the medium term.

This being Romania, however, pessimism soon surfaced. “When you read about Romania in London, Frankfurt or New York you see a flourishing emerging market, but when you look from inside the country you have a different view of the political volatility, fiscal challenges, challenges in the financial sector, in the economy and investments,” said Radulescu. “The prospects for the short term are positive but we see increasing pressure in terms of risk factors.”

An important part of the IIB’s future strategy is to build trade and investment links among all its member states, as well as with third countries.

In contrast to development banks such as the European Bank for Reconstruction and Development (EBRD), whose members are concentrated geographically in Eastern Europe and more recently the Mediterranean area, or across a single continent such as the Asian Development Bank, the IIB’s members are spread across three continents, though with a cluster among the EU member states in CEE.

“Trade finance is a useful tool to implement our strategy. The key word is competitiveness,” he added, alluding to the growth in protectionism in parts of the world. “We need to improve the competitiveness of our member states to be a winner in this battle.” He stressed in particular the need for trade finance support for SMEs.

Under Kosov, the IIB started to offer trade finance and related support such as direct guarantees for the first time at the request of its members. So far, the IIB has carried out more than more than 64 trade finance deals, supporting exports from the Czech Republic, Slovakia, Hungary, Russia and Vietnam, and imports to Mongolia, Romania, Russia and Slovenia.

Its first direct guarantee within its trade finance support programme was to support imports of Volkswagen cars to Belarus by Russian Volkswagen Group Rus. This was followed by an €8mn guarantee for the Export-Import bank of the Slovak Republic to support exports of power equipment from Slovakia to Cuba, both members of the bank.

Representatives of several member states also commented on the need to support trade within the bloc.

“We believe the current export structure of Romania, with almost 80% of exports going to the EU single market, is not sustainable for the future because we don’t want to put all our eggs in the same basket,” said Petru Alexandra Saca of the Romanian Chamber of Commerce and Industry. “We are interested in boosting trade with other countries such as Vietnam.”

Mongolia recently received support from the IIB for its struggling economy. The Mongolian delegate to the forum noted that the bank’s new strategy agreed is “ambitious and very expansionary”, and expressed the hope that her country would benefit from support through the trade finance programme.

“The IIB aims to finance trade finance and export-import finance, which is something Mongolia really looks forward to developing in cooperation with the IIB,” she said. “The economy of Mongolia is very dependent on the mining sector, which we aim to minimise as much as possible, and our main trading partners are China and Russia. With the help of the IIB the economic ties of Mongolia could be expanded beyond that.”