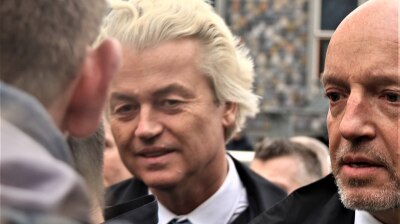 Wilders, one of Europe’s most prominent far-rightists and a key figure in shaping the immigration debate in the Netherlands over the past decade, on October 24 posted a cartoon picture of Erdogan and captioned it “terrorist”. On October 25, he posted an image of a sinking ship with a Turkish flag on it. “Bye bye @RTErdogan. Kick Turkey out of NATO,” he said under the image.

Erdogan’s lawyers said Turkish courts had jurisdiction on the matter because the insults were directed at Turkey’s president, Anadolu reported.

“Even though the crime was committed directly against the person in the presidential seat, the value that is being violated is the state’s political government structure,” the lawyers reportedly stated.

Wilders could not claim the comments came under freedom of expression, they added, saying he had targeted Erdogan’s “honour, dignity, character and reputation”.

“I have a message for President Erdogan and the message is very simple. In the Netherlands, we consider freedom of speech one of our most cherished rights and that includes cartoons, including of politicians,” he was cited as saying.

Ankara has long been critical of the views and policies put forth by Wilders, leader of the Freedom Party. Foreign Minister Mevlut Cavusoglu on October 25 called him a “loser racist” trying to gain support with animosity towards Islam and foreigners.

The legal move came a day after Erdogan urged Turks to boycott French goods over images of the Prophet Mohammad being displayed in France, which some Muslims consider blasphemous.

The reality of Turkey’s crisis-stricken economy and the financial support China provides to ease its bite have caused Turkish President Recep Tayyip Erdogan to in recent times make no more than ... more

Serbia’s state-owned Telekom Srbija plans to raise RSD23.5bn (€200mn) via a corporate bond sale to refund its debt and invest in improving its business, b92 reported on August 25. In March, ... more