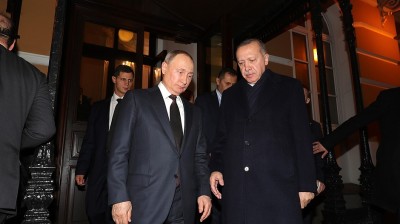 Putin (left) and Erdogan seen at the end of their Syria talks which took more than six hours.
By bne IntellIiNews March 5, 2020

Turkey and Russia on March 5 agreed to a ceasefire from midnight local time in Syria's northwestern Idlib province in a bid to head off a major escalation between Turkish forces and the Russian-backed Syrian military—but observers worried that it might amount to no more than a stopgap measure that could quickly unravel given that none of the parties have changed their Syria strategy.

Russian President Vladimir Putin and Turkish counterpart Recep Tayyip Erdogan met in Moscow and held talks for more than six hours. The outcome of their meeting also included an agreement for a security corridor and joint patrols.

The fighting in Idlib—the last bastion held by opposition rebels in the nine-year-old multi-sided Syrian Civil War—risked sparking an all-out war after, on the night of February 27, 36 Turkish soldiers were killed by air strikes. There are suspicions that Russian jets were used in those strikes but Moscow has denied it and Turkey has not publicly taken up the point, instead entirely blaming Syrian forces, who are also supported by Iranian-backed armed groups including Lebanese Hezbollah.

Turkey responded to the attack by launching waves of attacks on Syrian troops and tanks, including with the use of armed drones, and pressing Putin for talks. Independent analysts have said Syrian casualties in the attacks were very substantial while Damascus also lost three jets.

The deal reached by Putin and Erdogan should lead to the introduction of a security corridor 6km (four miles) north and 6km south from Idlib's key M4 motorway, which connects the government-held cities of Aleppo and Latakia. Joint Russian-Turkish patrols are to be established on the M4 from March 15.

Erdogan warned that despite the agreed truce, Turkey "reserves the right to retaliate with all its strength against any attack" by forces of Syrian President Bashar al-Assad.

Putin said that he hoped the deal "will serve as a good foundation for ending the fighting in the Idlib de-escalation zone [and] will end the suffering of the civilian population".

If Assad were to move to retake the whole of Idlib one danger for Erdogan would be a wave of refugees attempting to flee to Turkey, something that would prove unpopular with the Turkish electorate with which he is already in trouble given Turkey’s economic turmoil.

Soner Cagaptay, Beyer fellow & director of the Turkish Research Program at The Washington Institute for Near East Policy, responded to the ceasefire deal by writing on Twitter: “The Idlib ceasefire is less than ideal for Ankara, but still better than what could have transpired had Assad taken the entire province. If Erdogan had to care for additional Syrians (2 m in Idlib), he would rather have them in Syria than in Turkey, which already has 4 m refugees.”

Looking at whether the truce will hold, he added: “Erdogan-Putin deal in a nutshell: while Turkey gets to destroy a good chunk of Assad’s army, Assad gets to keep what he took in Idlib. I think this ceasefire will hold—in the short term. Assad has lost a sizable chunk of his military, and it will take him a while to recuperate.”

Addressing the question as to whether the Erdogan-Putin agreement would mean Ankara having to step up efforts to remove “all radical terrorist groups” from Idlib as per Article 5 of the Sochi agreement previously backed by Russia and Turkey on Syria, Howard Eissenstat, associate professor of Middle East history at St. Lawrence University, said: “We know the answer to that. We’re kicking this can down the road.”

The BBC's diplomatic correspondent Jonathan Marcus observed that fundamental questions remain, such as how long the truce would last, whether Syrian government forces or Turkish troops would pull back to designated zones and what would be the fate of the huge number of refugees. It is unclear, he wrote, whether the Assad regime and its Russian backers have given up on the idea of seizing back all of Idlib, and whether this is a permanent policy shift or just a temporary expedient to reduce the current tensions with Ankara.

For Putin, the Syrian war has been an essential part of re-establishing Russia as a power in the Middle East and beyond. Erdogan is intent on asserting Turkey’s claim to be the strongest regional power, especially now given his falling popularity with Turks.