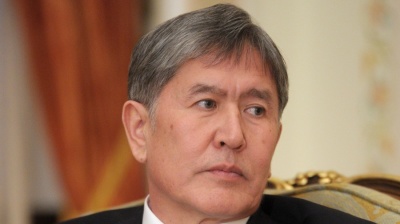 Atambayev surrendered to police on August 8 following a deadly two-day standoff at his compound.
By bne IntelliNews August 14, 2019

Kyrgyz security officials have charged ex-president Almazbek Atambayev with masterminding a murder, while also accusing him of plotting to stage a coup following the bloody confrontation between his supporters and police at his residential compound during his arrest last week.

Atambayev surrendered to police on August 8 following a deadly two-day standoff with security forces at his compound in the village of Koi-Tash near the Kyrgyz capital of Bishkek. The security forces raided his residence after he refused to obey three subpoenas to show up at the Interior Ministry. The resistance put up by Atambayev’s supporters left one special forces officer dead. The authorities labelled the killing a “cynical murder”. Another 170 people, including 79 law enforcement officers, were injured.

On August 13, Zamir Beishekeev of the Prosecutor-General's Office, said that Atambayev was accused of organising mass unrest and using violence against representatives of the authorities, among other charges. The accusation of plotting a coup came from the head of the State National Security Committee, Orozbek Opumbayev, at the same press conference. The claims were added to an already long list of charges, including five counts of criminally abusing his office.

The new charges and accusations will aid the Kyrgyz authorities intention to maximise Atambayev’s prison sentence, as former ally and current rival President Sooranbai Jeenbekov seeks to emerge as the undeniable victor of a year and a half-long conflict over influence in Kyrgyz politics.

Before he became president, Jeenbekov was seen by many observers as likely to become nothing more than a puppet of Atambayev, who was the central figure in Kyrgyzstan’s two revolutions, which toppled the governments of Askar Akayev in 2005 and Kurmanbek Bakiyev in 2010. Instead the two became embroiled in a power struggle over their roles in Kyrgyz politics and the Social Democratic Party, which controls the majority coalition in parliament. Atambayev saw his popularity wane during his presidency, thus there is no clear prospect of present events sparking a third revolution.

Kyrgyz President Sooronbai Jeenbekov has signed a decree banning the exploration and mining of uranium and thorium deposits in Kyrgyzstan, his press service reported on December 16. The decree is ... more

The OSCE representative on freedom of the media, Harlem Desir, on August 14 expressed his concern over the shutting down of the Aprel TV channel in Kyrgyzstan. He called for respect for media ... more