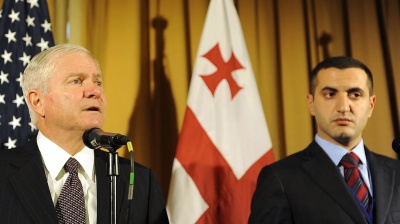 Davit Kezerashvili (right) seen with ex-US secretary of defence Robert M. Gates during a Nato conference in 2008.
By Iulian Ernst in Bucharest August 14, 2019

A new front has been opened in Georgia’s ‘Battle of the political airwaves’ with the announcement that a new channel, Formula, will be broadcast from October. One of the financiers is oligarch Davit Kezerashvili, who served as defence minister during the short war with Russia in 2008 when Georgia was still ruled by the Mikheil Saakashvili administration.

With main opposition TV channel Rustavi 2 in the middle of competing claims for legal ownership and possibly set to slip into pro-government hands, and with the owner of the country’s other major channel, TV Pirveli, under investigation for alleged complicity in money laundering 11 years ago—in connection with the also accused co-founders of TBC Bank—there is no doubt that Georgia’s media market is now very visibly subject to a struggle for influence in advance of the 2020 general election.

The likes of Kezerashvili are active in trying to persuade Georgia's younger generations to pursue a highly pro-West orientation for their country, with the goal of Nato membership, while the ruling Georgian Dream government takes a more balanced stance, stressing the realistic need to maintain good relations with Moscow.

Fled with Saakashvili
Kezerashvili became a highly controversial entrepreneur after fleeing the country with Saakashvili, whom he helped found Georgia’s United National Movement (UNM). In early 2013, officials under the government led by Bidzina Ivanishvili—an oligarch with a background in Russia who is Georgia’s wealthiest individual, chairs the ruling Georgian Dream party and is still seen by many as the country’s de facto leader—brought multiple criminal charges against Kezerashvili, but his lawyer successfully fought off an extradition request sent to France, claiming the charges were politically motivated. The charges against Kezerashvili, a former chief of the financial police in Georgia, included embezzlement, misuse of funds, abuse of power, money laundering and bribe-taking for having allegedly facilitated the smuggling of ethyl spirit from Ukraine to Georgia.

Zuka Gumbaridze, who is set to serve as the director of the Formula channel, told Ambebi.ge that the Formula Creative company applied to the Georgian National Communications Commission (GNCC) for broadcasting authorisation on August 13.

According to Gumbaridze, Formula will be available via cable, satellite and standard antennas throughout Georgia.

As for the source of funding, Gumbaridze said that negotiations with investors were still under way. One investor in talks is Kezerashvili.

"We are going into the final details with the investors now, and soon we will be more open about who they will be. I can officially confirm that we have talks with Davit Kezerashvili on this issue as well," he said.

Khazaradze’s pro-West vehicle
Separately, Mamuka Khazaradze, one of the co-founders of Georgia’s FTSE-250 listed TBC Bank, has announced the upcoming launch of a pro-Western movement, defined so far in broad terms as an opposition political vehicle.

Khazaradze lately stepped down from the boards of TBC Bank and the Anaklia Development Consortium (ADC)—which, backed by TBC and American and other partners, is developing Georgia’s flagship infrastructure project, Anaklia deep water port on the Black Sea coast—to concentrate on fighting charges pressed by prosecutors related to alleged money laundering activities in 2008.

"Recent developments in the country are becoming alarming. I made a decision to establish a public movement this September with my friends and colleagues and professionals of various spheres, the main purpose of which will be to unite the country and maintain its independence and freedom,” Khazaradze said in early July. He spoke with the country still shaken up by events in late June that included riot police violently forcing back crowds attempting to the storm the parliament in Tbilisi in a confrontation over permission given to a Russian MP to address lawmakers from the speaker’s chair in the parliamentary chamber.

“Our country and people certainly do not deserve the conditions they have to live under currently. The country has huge potential in the case of young people, a new generation, honest, smart and professional individuals, as well as emigrants, who work hard and unfortunately for them have to strengthen other countries’ economies because they have been deprived of an opportunity to live in a decent way and work in their homeland,” he added in comments on August 12 posted on his Facebook page.

Khazaradze has strongly criticised Ivanishvili, whom he has accused of being behind troubles faced by ADC that have complicated its attempt at raising financing for the planned deep water port. His political enemies are clear, but who would likely be his allies is unclear.

In a political system dominated so far by Saakashvili's UNM and Ivanishvili's Georgian Dream, space for a new political force might be narrow—but a new proportional voting system, which will work without a votes-attained threshold for small parties looking to enter parliament, might generate some surprising results in the next general, due to be held by October next year.

What’s more, the anti-government protesters who made headlines with their protests outside the parliament in June avoided extending their support to any political party. Many voters disappointed by the existing major parties might be drawn by a political vehicle such as the one to be initiated by Khazaradze.

Major fighting erupts between Armenia and Azerbaijan over Nagorno-Karabakh
9 hours ago
TURKEY INSIGHT: Follow the (hot) money
2 days ago
Lukashenko has isolated himself from the rest of the world with a secret inauguration
2 days ago
Iran’s oil minister openly admits forging export documents to dodge US sanctions
2 days ago
“Putin’s chef” follows through on threat to bankrupt Navalny, bailiffs seize his apartment
2 days ago