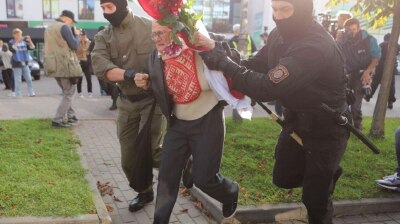 More than 100,000 people turned out for the March of Justice at the Sunday rally in Minsk.
By Ben Aris in Berlin September 21, 2020

Belarusian hackers released another thousand names of police officers in retribution for police brutality during clashes with protesters in the regional city of Brest at the weekend mass rally.

Hackers calling themselves Cyber Patriots claimed they hacked the Ministry of the Interior and downloaded the details of its entire staff, which they threatened to release if police detained any protesters during the weekend rallies. They then made good on their threat, releasing a first list of 1,000 names. They followed through with a second list on September 20. It was specifically a list of officers that live in Brest, where clashes with protesters have been particularly brutal.

The violence is slowly escalating at the weekend rallies that draw at least 10,000 women on Saturdays for the female-only gathering and more than 100,000 people for the Sunday mass rally.

The OMON riot police have become more organised and are operating in larger groups of about two dozen instead of the groups of half a dozen used earlier that sometimes were overwhelmed by protesters rescuing victims from arrest.

Larger phalanxes of OMON bearing riot shields have appeared. A new tactic sees busloads of OMON descend on a street where protesters are leaving a march and arrest everyone making their way home. Several videos have appeared on the Nexta Telegram channel of pedestrians running from police trying to escape, with the OMON randomly grabbing anyone passing by.


Presumably the idea is to raise the cost of protesting as now there is a chance of arrest, whereas on previous weekends marchers could demonstrate largely with impunity thanks to the very large size of the crowds. Over 100 women were arrested at the “Bright March” for women on Saturday and an estimated 430 were arrested at the “March for Justice” mass rally on Sunday.

The protesters have responded by increasingly diluting their protests by holding more, but smaller events in housing estates scattered around the city and in regional cities. Often, famous Belarusian artists come and hold impromptu concerts for the residents, who are also becoming better organised by creating local chat groups on Telegram to co-ordinate their actions. Many regions have gone as far as to brand their local resistance, creating icons for their region that are appearing on flags and posters.

The authorities continue to cross new red lines each week. Women were largely left in peace until a week ago but are now being snatched and bundled into paddy wagons.

Nina Baginskaya, the iconic 73-year old pensioner who has been protesting against Belarus' self-appointed President Alexander Lukashenko for decades, has essentially been exempt from arrest. But she was briefly detained during the woman’s march on Saturday for the first time, although she was released after a few hours. Over the last two decades, she has run up a bill of over $20,000 in fines for her political actions, which in Belarus where the average income is only $500 a month, is a fortune. The courts have docked half of her pension each month to pay off the backlog and she will have earned a new penalty this weekend for participating in an unauthorised rally. 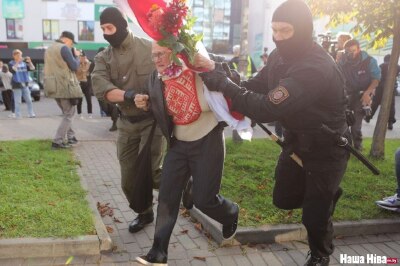 OMON used pepper spray on the protesters for the first time in Brest where the clashes were jarringly brutal. Local OMON were outnumbered and got into a stand-off with protesters until reinforcements arrived. One officer walked up to the crowd and began to shoot pepper spray into faces. In a later incident, when the police were losing control of the situation, an officer fired a shot from a rifle into the air. The Ministry of the Interior later claimed that it was a blank round. This is the second report of officers firing a gun into the air. A similar incident was recorded at a rally a week earlier.

However, the most scandalous event was when authorities took the six-year old son of political activist Elena Lazarchik and interned him in an orphanage on the night of September 18.

The authorities have frequently threatened opposition leaders with taking their children under the dysfunctional family laws enacted a few years ago, but this was the first time they had carried out the threat by targeting a public figure.

The outrage was immediate. Prime Minister of Poland Mateusz Morawiecki was among the first to react:

A large crowd gathered outside the orphanage in the Frunzensky district of Minsk demanding that the boy be returned.

Lazarchik was detained in Minsk on September 17 as she was leaving her place of work, the Vesna human rights centre, one of Belarus’ leading NGOs. She was held until 11pm without being charged. When she returned home she discovered that the staff of the capital's 126th school which her son attends had called social services after she did not pick up her son from school at 6pm and he was taken to the orphanage. The school made no effort to call Artem’s relatives, despite the fact that both his father and grandmother are included in the child's personal file kept by the class teacher, with their phone numbers provided.

In the face of popular anger, the authorities backed down and Artem was finally released at midday the following day to roars of “Well done!” from the crowd outside the orphanage.

​In another sad first, a young man set himself on fire outside a local police station in the Smolevichi District of Minsk. He is now in hospital fighting for his life with 90% of his body bearing burns. 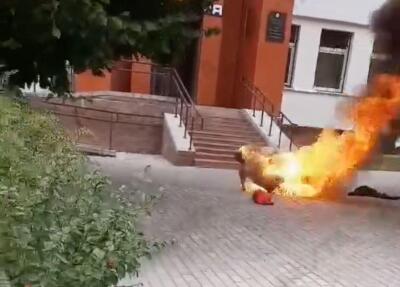 Sergei Radchenya, 36, comes from the village of Zadomlya, Smolevichi district. He worked as a shelf stacker in one of the capital's stores, although he is a qualified lawyer. He poured petrol over himself and set himself alight before officers managed to douse the flames and call an ambulance.

According to reported comments from his family, he appears to have been suffering from mental difficulties or depression and had previously threatened to kill himself. He had been detained by police the previous day. He is not expected to survive his ordeal.