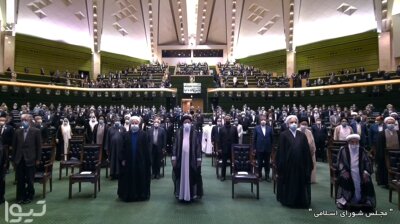 Raisi (centre) at the inauguration ceremony. Many Iranians will give him a cool welcome.
By bne IntelIiNews August 5, 2021

There were some signs that Raisi will move to complete negotiations for a relaunch of the 2015 nuclear deal, or JCPOA, as he seeks to give Iranians an economic boost amid Iran’s battered economy. "The sanctions must be lifted. We will support any diplomatic plan that supports this goal," Raisi said in his inauguration speech, referring to the swingeing sanctions introduced against Tehran by former US president Donald Trump when he unilaterally pulled Washington out of the nuclear accord in spring 2018.

Rouhani clearly grew frustrated that during his final weeks as president, Supreme Leader Ayatollah Ali Khamenei would not allow his team to complete the indirect Vienna talks with the US—and direct talks with five other major powers—aimed at finding a way to resurrect the JCPOA. That task has instead been handed to Raisi. There are anxieties that he will make additional demands in the talks that could prove unpalatable to US President Joe Biden’s negotiators, but Western diplomats will at least be encouraged that he has signalled an unmistakable willingness to talk—EU diplomat and nuclear deal negotiator Enrique Mora was scheduled to be among representatives from the bloc attending the Raisi inauguration.

Ex-judiciary chief Raisi, 60, begins his four-term as president in something of a tight corner. The Iranian economy is struggling to emerge from a bitter three-year recession caused by the Trump sanctions and, given how the unelected Khamenei—who as head of the regime has the final say on all matters of state—agreed to the barring of all the top moderate candidates in the June presidential election, thus giving Raisi an almost unopposed path to victory, the new president is very unpopular with many millions of Iranians. Prolonged social unrest that broke out in the southwest of the drought-ridden country in July in response to water shortages, a coronavirus epidemic that officials say has entered its fifth wave, industrial action for better pay and conditions that has been taking place in the energy industry for many weeks, protests over low pensions, an Iranian rial that remains on its knees, high unemployment and soaring inflation, not to mention a sabre-rattling Israel that on August 5 called for military action against Iran following attacks on shipping in the region—for which Tehran denied responsibility—are other matters that will be in his first presidential in-tray.

Raisi also faces the prospect of opponents and campaign groups redoubling efforts to dig up more evidence of how he was in 1988 involved in the executions of thousands of political prisoners, many of whom were leftist Iranian opponents who backed Iraq in the Iran-Iraq War. Raisi was one of four judges who sat on secret tribunals that came to be known as the "Death Committee", which condemned the prisoners to death. He has said the sentences were justified because then-supreme leader Ayatollah Ruhollah Khomeini had issued a fatwa, or religious ruling. The US imposed sanctions on Raisi in 2019 for claimed human rights abuses.

The sheer weight of the problems facing Raisi and causing untold misery among Iran’s 83mn-strong population may suggest he would be foolish not to make every effort to secure a ‘JCPOA 2’ and the economic lift it would bring the country. But the nuclear deal—under which Iran agreed to UN inspections and measures aimed at keeping its nuclear programme entirely civilian in return for a shield against heavy sanctions—was Rouhani’s signature achievement and the hardliners, including Raisi, set their faces against it when it was first negotiated. Reviving it is an awkward matter for the conservative camp and any demand from the US that the deal should be reconfigured to restrict Iran’s ballistic missile programme and support for allied militias across Middle East conflict zones will be a non-starter.

During the inauguration, broadcast live on Iranian state TV, Raisi pledged: "I will dedicate myself to the service of the people, the honour of the country, the propagation of religion and morality, and the support of truth and justice."

Other attendees included regional representatives of alleged terror groups, including Ismail Haniyeh from Hamas and Naim Qassem from Hezbollah, who sat next to each other.

Raisi was initially expected to submit his proposed cabinet immediately after the inauguration, but some local reports suggest that move will now take place next week.

Lately, the pro-regime media in Iran have started referring to Raisi as “Ayatollah”, where previously he was classed as a regular Islamic cleric. The media push appears to be part of a wider effort to raise the new president’s credentials, despite his lack of formal education. Raisi, born in Mashhad, did not progress beyond the lower levels of a clerical school in Qom or elsewhere prior to the 1979 Islamic Revolution, at the culmination of which he was 18-years-old. There has long been speculation that Raisi is likely to succeed Khamenei, 83, as supreme leader. Such talk faded after Rouhani trounced him in the 2017 presidential election, but is now getting louder.

During the inauguration proceedings, guests may have noticed two empty front row chairs. They were for the Larijani brothers, Ali and Sadeq, who reportedly refused to attend the event due to Ali being one of the candidates disqualified from contesting the presidential election.

bneGREEN: G7 could set green example for rest of world
Nearly everyone in Iran infected by coronavirus at some point concludes study
UK ‘tells trapped Afghan interpreters to escape on their own’