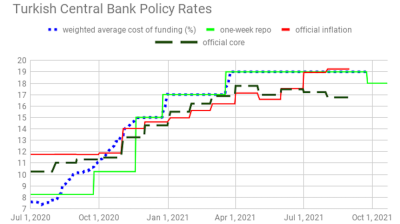 A search in vain for monetary logic was under way in Turkey on September 23 as the Turkish central bank cut its policy rate by 100bp to 18%. The widely held suspicion was that the move was directly ordered by Turkish President Recep Tayyip Erdogan, despite there being no conventional logical grounds for it.

The move flew in the face of the market consensus—all but one of 23 economists surveyed by Bloomberg predicted the monetary policy committee (MPC) led by Turkish central bank governor Sahap Kavcioglu would keep the policy rate at 19%, unsurprising given official annual inflation unexpectedly climbed to 19.25% last month, pushing the Turkish lira’s yield when adjusted for inflation below zero for the first time in nearly a year.

The rates announcement from the MPC also dropped pledges to maintain a “tight monetary policy stance” and a “policy rate above inflation”, while references to “core” inflation indicators (presently lower than annual inflation) were added. The central bank said it saw current headline inflation as “transitory.”

Following the announcement (which you could term a “surprise”, but these “surprises” have become rather routine in Turkey in recent years, with Erdogan having fired three central bank governors within 20 months over policy differences), the USD/TRY pair saw TRY8.8016 before easing back into the 8.70s. The current all-time weakest rate remained at 8.8061, registered on June 25. As of 19:20 Istanbul time, the rate was 8.7637.

“This is a crazy move, a ridiculous move,” Timothy Ash, an emerging markets strategist at BlueBay Asset Management, said. “Inflation is high and rising so there’s no justification for this except politics. Erdogan’s gambling with the lira because he’s losing popularity and is desperate to get the economy moving. This isn’t a proper central bank, it’s Erdogan’s fiefdom.”

“Kavcioglu will have been well aware of what happened to previous governors that defied President Erdogan’s desire for rate cuts and may have moved on policy to save his job,” Jason Tuvey, senior emerging markets economist at Capital Economics, wrote in a note to clients, adding that the rate cut had “destroyed the credibility that Kavcioglu had built up”.

In the coming period, under normal conditions, the lira will be susceptible to depreciating to further record lows, while the Erdogan administration is expected to persist in using its official reserves and retail accounts to prevent it slumping to consecutive records.

With the latest cut—which Erdogan might try to attribute to his ‘Erdoganomics’ in which the unorthodox theory that high rates produce accelerating inflation wins out—Turkey’s official inflation releases become meaningless again. The upcoming lira depreciation will place fresh pressure on the official consumer price index (CPI) series. The story of a declining trend in the official series, starting with November, is no longer sellable following the further lira decline.

The “core” inflation series has actually been decoupling from the headline figure since July. It seems that upcoming rate decisions will depend on the course of the lira and the weight of the government’s ammunition in defending the currency.

The magnitude of the currency depreciation will be the main focus in the coming period, while it is fair to conclude that Turkey, in reality (which many academics and analysts claim is obscured by official statisticians who use methodology that delivers inflation numbers far lower than what actually faces Turks in the real economy), is entering into a full-blown course of hyperinflation.

Booming global inflation coupled with lira depreciation will multiply Turkey’s real inflation, thought to already be hovering in the 40-50% range at least.

For what it’s worth, the official inflation data for September will be released on October 4. Observers will watch for comments from officials to glean any hints they can on the upcoming route to be taken by Turkey’s perplexing monetary policy.

The next MPC meeting is scheduled for October 21. November 18 and December 16 then follow as the dates for the committee’s last two meetings of 2021.

On July 29, the central bank hiked its end-2021 inflation forecast to 14.1% from the 12.2% it was anticipating in April. Also, the upper limit on official inflation was moved from 14.4% to 16%, closer to market expectations.

Analysts will wonder just how “transitory” Turkey’s official inflation can be.

On the global front, there has lately been some movement in the Fed’s “tapering” talk as regards the US central bank’s large-scale asset purchases and monetary stimulus. Given that the money printing continues, such talk creates some short-term “juicy” volatility. Nevertheless, the current global environment will not be supportive for the lira until the new year rally truly gets started.

In New York, to where the Turkish president journeyed for this week’s UN General Assembly gathering and speeches, Erdogan failed to grab a photo opportunity with Joe Biden. However, his spokesman was in the White House to meet with a Biden advisor. The foreign ministers also held a bilateral on the margins of the Assembly. Some US soldiers, meanwhile, were in Ankara for Nato training programmes.

What to say about Erdogan at this point? Since his bestie Donald Trump begrudgingly vacated the Oval Office, the “autocrat” (as Biden has referred to him) has struggled to find a dignified role as a US ally. Right now he comes across as something like Biden’s dope man, who does dirty Afghanistan jobs through the back door of the White House. Well, in any case, foreign politics remain supportive for the lira.