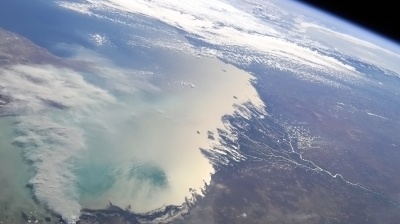 State-owned companies in Kazakhstan were on March 23 ordered to start selling part of their foreign currency revenue on the domestic market to support the embattled national currency.

The order came from the office of Kazakh President Kassym-Jomart Tokayev, with the Kazakhstani tenge (KZT) having weakened within two weeks by around 17% to historic lows against the dollar since the collapse of the OPEC+ global oil producers’ pact. The failure to extend the agreement sent the price of crude, Kazakhstan’s key export, plunging. The coronavirus (COVID-19) pandemic and its damaging impact on industrial energy consumption has, meanwhile, hit China’s appetite for Kazakh gas, with PetroChina issuing a force majeure to gas suppliers in early March. 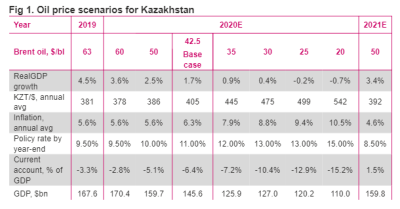 Tokayev also ordered state-owned companies to start converting their foreign-currency deposits into tenge and pay out up to 100% of last year’s profits in dividends.

The decisions were announced during a cabinet meeting. Other moves announced by the president include a standstill on bank loan repayments by individuals and small and medium sized enterprises. It will apply for the duration of the state of emergency announced in the battle against by the coronavirus outbreak. It is likely to last until at least mid-April.

The collapsing value of the tenge was triggered after the central bank, the National Bank of Kazakhstan (NBK), said it would stick to a free float regime instead of supporting the currency with interventions as it promised when oil prices crashed in mid-March.

Looking at Kazakhstan’s moves to adjust to a lower oil price environment, Sofya Donets, economist for Russia and the CIS at Renaissance Capital, said in a March 23 note: “Kazakh tenge has depreciated significantly (by 17% in two weeks) but it is only in line with oil and other commodity currencies in the region, first of all Russia. The National Bank policy response supported KZT in previous two weeks keeping it even stronger than we could anticipate giving current commodity pricing.

“We believe that despite relatively high sensitivity to the oil price slump Kazakhstan looks good in terms of fiscal position (that is reflected in stable Eurobond spreads) and a timely policy response that should decrease costs of the coronavirus outbreak. We have updated our oil price scenarios for Kazakhstan adding low-price scenarios into the menu. As well as Russia, Kazakhstan could enter a recession if oil price stays at $25/bl in average in 2020—that is far below our base case for now.”

Tokayev addressed the nation on state television on March 16. During his address, he mentioned that Kazakhstan has $90bn in reserves to support the Kazakh economy, but made no mention of the exchange rate. He also said that the government would ensure price stability on food staples and other necessities.

Tokayev gave himself emergency powers on a range of issues, including foreign trade and taxes along with the setting of maximum prices of important goods and services. In the face of the coronavirus outbreak, Kazakhstan declared a month-long national state of emergency on March 15. The capital Nur-Sultan and largest city Almaty were locked down from March 19.

Borealis pulls out of $6.8bn plan to build petrochemical plant in Kazakhstan

Kazakh manufacturing ekes out PMI expansion in May
New coronavirus cases decline across emerging Europe but the epidemic’s not over yet
Borealis pulls out of $6.8bn plan to build petrochemical plant in Kazakhstan

Foot traffic at Russia’s leading malls jumps as rebound gets underway
12 hours ago
Armenia’s coronavirus plight worsens with more than 1,000 more infections in two days
21 hours ago
Authorities “may be sowing seeds of Turkish economy’s downfall” by pumping money at fastest rate for more than decade
23 hours ago
Turkey’s electricity consumption collapses 17% in May
2 days ago
Russian government presents National Recovery Plan to President Putin
2 days ago