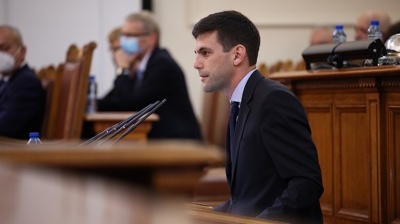 Nikolay Minchev was Bulgaria's youngest-ever parliament speaker and part of a new generation of reformers. / Bulgarian parliament
By Denitsa Koseva in Sofia June 16, 2022

A new, informal, majority removed Bulgaria’s parliament speaker Nikola Minchev on June 16, in a move seen as a prelude towards a no-confidence motion that is highly likely to bring down the reformist government of Prime Minister Kiril Petkov.

The removal of Minchev was seen as a “rehearsal” for the no-confidence motion against the government expected next week.

The vote took place after a heated debates in parliament and united There Are Such People (ITN) – a former member of the ruling coalition – with the opposition Gerb, ethnic-Turk Movement for Rights and Freedoms (DPS) and far-right Vazrazhdane parties. They gathered 125 votes against 114 voting against and Minchev sustaining from voting. Minchev was seen as one of the most intelligent and balanced speakers in Bulgaria to date despite his young age.

“In such a parliament maybe it would better if I am not a speaker,” Minchev told reporters after the vote.

He added that there is a new majority in parliament.

“I entered politics and the national assembly with the desire for change of a model that has been ruling until this moment. The newly-forming majority not only does not bring a change but will preserve the previous model,” Minchev also said.

Petkov said that bringing down the speaker of his Change Continues party would not scare the government and force it to negotiate with the former ruling Gerb party for support.

“If you think that accepting the resignation of Nikola Minchev today you will disturb our government and force us make an agreement with you, this will not happen,” Petkov told MPs.

He added that the government will not stop sending signals to the EU’s prosecution on corruption cases related to DPS member and US blacklisted MP Delyan Peevski.

The request for Minchev’s removal was made by ITN on June 15. The party claimed he breached the parliament’s regulations by not allowing Foreign Minister Teodora Genchovska to talk to lawmakers at a closed session but allowed live streaming by public broadcaster BNT.

ITN left the ruling coalition on June 8, accusing Petkov of betraying the national interest with his intention to lift the veto on the start of EU membership talks with North Macedonia.

On the other hand, Petkov says that ITN pulled out as it did not get control of around €2bn for regional development, which supposedly would have been paid to companies related to Gerb and DPS and probed for the embezzlement of hundreds of thousands of millions of levs paid for road construction projects.