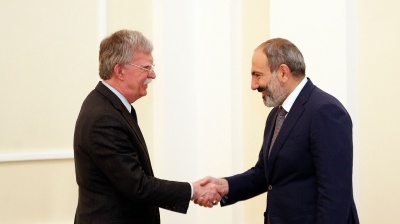 The US is not pressuring Armenia to curtail its relations with neighbouring Iran in connection with the sanctions regime imposed on Tehran by the Trump administration, according to Armenian Prime Minister Nikol Pashinian, as related by a published interview with French-Armenian magazine Nouvelles d’Armenie.

Pashinian was asked whether the sanctions are causing small, impoverished Armenia serious problems. “I don’t want to make grandiose statements but our diplomats have succeeded in scoring a very important victory in this regard,” he replied. “Our American partners seem to have gotten a good grasp of the issue. They have started to understand that Iran is one thing for Washington and another for Armenia.”

“I can say that at the moment we are not subjected to any pressure [from the US],” added Pashinian.

Parliament speaker Ararat Mirzoyan, a close associate of Pashinian, made similar comments when he visited Washington and spoke at the Atlantic Council think-tank in July.

“We don’t want the United States to put pressure on Armenia to join in its Iran sanctions agenda,” Mirzoyan said.

He argued that Iran, an economy with 82mn compared to Armenia’s 2.9mn, serves as one of his landlocked country’s two conduits to the outside world due to closed borders with the two other Muslim neighbours, Azerbaijan and Turkey, given the dispute over breakaway territory Nagorno-Karabakh.

Arch-hawk and US national security advisor John Bolton discussed the US sanctions with Pashinian during his trip to Armenia in October last year. Bolton said traffic through the Armenian-Iranian border will become a “significant issue” because Washington would be enforcing the sanctions “very vigorously,” according to The Armenian Mirror Spectator.

Pashinian subsequently remarked that his government would “deepen not only economic but also political relations” with Tehran. He paid an official visit to the Islamic Republic in February.

Iranian President Hassan Rouhani has been invited by Armenia to a summit of the Eurasian Economic Union (EEU) to be held in Yerevan in October. Iran and the Russian-led trade bloc signed a preferential trade agreement last year that should be activated by November.

An International Monetary Fund (IMF) team on April 21 concluded a two-week visit to Armenia during which they held virtual staff-level discussions with the Armenian authorities to discuss recent ... more

Armenia’s private sector will obtain new resources for green financing thanks to a $6mn financial package put together by the European Bank for Reconstruction (EBRD) and ... more