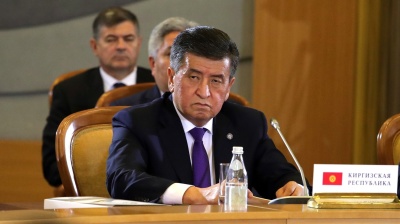 Aprel TV was shut down after Kyrgyz President Sooronbai Jeenbekov sent in special forces to arrest his adversary.
By bne IntelliNews August 15, 2019

The OSCE representative on freedom of the media, Harlem Desir, on August 14 expressed his concern over the shutting down of the Aprel TV channel in Kyrgyzstan. He called for respect for media diversity in the Central Asian nation.

Aprel is an opposition TV channel owned by ex-president Almazbek Atambayev, who was arrested on August 8 and now faces multiple charges, including murder and causing civil unrest. The channel was shut down on August 9 after Atambayev surrendered following a deadly two-day stand off with the security forces at his residential compound. However, the TV channel’s journalists have managed to continue reporting on the internet.

“I am concerned by the seizure of assets of the TV channel Aprel and the suspension of its operations,” Desir said. “While I am fully aware of the exceptional circumstances under which this decision was taken, I call on the relevant authorities to review this decision. Freedom of the media and media diversity should be preserved even in difficult situations.”

Other international observers, including Reporters Without Borders (RSF), have also called for the Kyrgyz government to allow the resumption of broadcasting at Aprel TV.

“The investigation into Almazbek Atambayev’s assets cannot be used to justify a violation of press freedom of this kind, especially as Aprel TV is not accused of breaking the law,” said Johann Bihr, the head of RSF’s Eastern Europe and Central Asia desk. “We urge the authorities to rescind this disproportionate measure and to protect media pluralism.”

Kyrgyz President Sooronbai Jeenbekov has signed a decree banning the exploration and mining of uranium and thorium deposits in Kyrgyzstan, his press service reported on December 16. The decree is ... more

Kyrgyz security officials have charged ex-president Almazbek Atambayev with masterminding a murder, while also accusing him of plotting to stage a coup following the bloody confrontation between his ... more