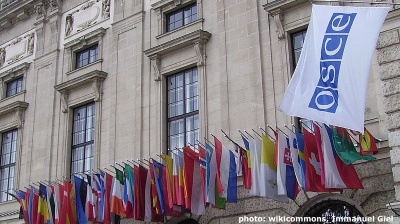 The Russian delegation met with their counterparts from the OSCE to discuss the Kremlin's demand to limit membership of Nato, but made little progress. / wiki
By Ben Aris in Berlin January 13, 2022

The first round of Russian prompted talks to halt Nato’s eastern expansion and negotiate a new security deal in Europe has concluded, but with little progress made.

“The talks between the US, Nato and Russia have concluded with both sides doing little more than setting out their respective positions and issuing clear threats as to what would happen in the event of an invasion or if the US were to enact more damaging sanctions,” Chris Weafer, CEO of Macro Advisors, said in a note emailed to clients.

The third round of talks in a week of negotiations ended with no progress on either side, but the OSCE meeting was less tense than the previous meeting of the Nato Council, the first such meeting in two years. Russia broke off diplomatic relations with Nato on October 19 last year.

Diplomats warned that the threat of war loomed over Europe once again after Russia spooked the West by increasing its forces on Ukraine’s border by about 100,000.

"It seems that the risk of war in the OSCE area is now greater than ever before in the last 30 years," Polish Foreign Minister Zbigniew Rau said, as cited by RFE/RL, after Poland took over the chairmanship of the 57-member security organisation for 2022.

The US envoy to the OSCE stuck to the same hard line that “the Silver Fox”, as US Deputy Secretary Wendy Sherman has been nicknamed, the head of the US delegation, has put forward in the previous two meetings.

The talks kicked off with a dinner between Sherman and Ryabkov where the two laid out their basic positions. In the days that followed it has become clear that the US side sees no possibility of acceding to the Kremlin’s demands on some sort of guarantee of no more Nato expansion as a deal breaker. Sherman has made it clear that the US and its allies are unwilling to start negotiations until Russia de-escalates by withdrawing some of its troops brought up to the bases near Ukraine’s border.

"As we prepare for an open dialogue on how to strengthen security for the benefit of all, we must decisively reject blackmail and never allow aggression and threats to be rewarded,” US Ambassador Michael Carpenter told the OSCE meeting, as cited by RFE/RL.

Russia’s representative Alexander Lukashevich also stuck to Ryabkov’s hard line and told the OSCE that Russia would take action if its concerns over Nato expansion were not taken seriously.

"If we don't hear a constructive response to our proposals within a reasonable time frame and an aggressive line of behaviour towards Russia continues, we will be forced to draw appropriate conclusions and take all necessary measures to ensure strategic balance and eliminate unacceptable threats to our national security,” Lukashevich told journalists after the talks finished, as cited by RFE/RL.

"Russia is a peace-loving country. But we do not need peace at any cost. The need to obtain these legally formalised security guarantees for us is unconditional,” he added.

Russia has been telegraphing this new harsher policy to the West since it was launched by Russian Foreign Minister Sergei Lavrov with his new rules of the game speech in February last year, where he said that Russia would no longer accept being threatened with more sanctions and was prepared to break off diplomatic relations if the West continued to use this dual “carrot and stick” approach to dealing with Russia.

Can a deal be cut?

After a week of talks the prospects of a deal seem to be fading. Lukashevich said Russia wasn't getting "a constructive response" to its proposals. Ryabkov was also on the wires saying that the talks had reached a “dead end,” as the Kremlin delegation appears to be reaching the conclusion that the West is not prepared to contemplate its core demand of fixing a promise of no further Nato expansion with a binding treaty.

Nevertheless, many analysts believe there is still room for negotiation. The global chief economist and head of macro strategy at Renaissance Capital told bne IntelliNews during a podcast published the same day that there is still a possibility for a backchannel deal.

“When Putin and Biden met in Geneva last year I’m assuming they spoke about this and that Putin received assurances that the US did not want a conflict,” said Robertson. “Biden wants to concentrate on domestic problems, on China and doesn't want to deal with the Russia problem. Putin has caused this issue and will use it to get concessions on missile deployments, on exercises, and then he gets what he wants.”

Chris Weafer agrees that the Putin is a pragmatist and can use the current tensions to win concessions from the White House, which is increasingly distracted by its desire to engage with China.

“Moscow’s key demand is probably negotiable. Russia’s key demand that Ukraine (or Georgia) not be admitted to Nato is never going to be officially accepted and that is well understood in Moscow. It is seen as a negotiation position and one that can be moderated in exchange for other agreements,” Weafer said.

Further talks are expected, according to Weafer. Both sides said that they will consider the position laid out by the other and while there is no set date for follow-up talks, “the clear understanding is that further meetings will take place,” says Weafer.

bne IntelliNews has taken a more pessimistic line in a recent op-ed, arguing that the status of Ukraine is Putin’s legacy issue. He brought stability and prosperity to Russia after the chaos of the 1990s and after two decades in the job he wants to retire with the status of Ukraine settled once and for all – and he is prepared to break off relations with the West if he doesn't get his way.

bneGREEN: Is coal killing us all?
Kyrgyzstan's Peak Putin becomes a case of 'pique Putin' as protesters plant Ukrainian flag atop mountain
Nine out of 10 Russians oppose concessions in exchange for end of sanctions

Police struggle to find climbers capable of getting to mountain top to remove prank protest 4,446 metres up.

Parliament approves proposal by President Andrzej Duda that dismantles the Disciplinary Chamber of the Supreme Court.

Belarusian PM confirms that Belarus supplies weapons to Russia. Roman Golovchenko said that Belarusian weapons were in demand not only domestically but also in Russia and the two countries have set up join R&D-projects to navigate Western sanctions.