Putin’s approval rating ends 2022 at 81%, boosted by support for the war in Ukraine 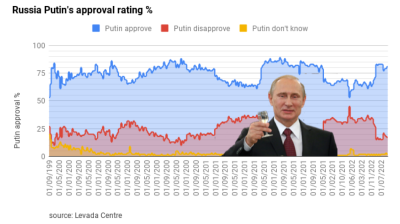 President Vladimir Putin's personal approval rating received a patriotism bump after the war in Ukraine started, lifting it from the 60s into the 80s. / bne IntelliNews
By bne IntelliNews January 2, 2023

If anything, support and trust in Russian President Vladimir Putin has increased since the war in Ukraine started at the end of February.

Putin’s personal popularity ranking stood at 83% in March (chart), with 15% holding an unfavourable opinion of the president and 2% unsure, and stayed at that level until August, when things started to go wrong with the campaign in Ukraine.

His popularity fell to 77% (21%, 2%) in September, according to the Levada Centre, after Ukraine’s spectacular Kharkiv counter-offensive began, but recovered to 79% in October and November to end the year in December at 81% (17%, 2%).

Overall, Putin has been enjoying the same “patriotic bump” that lifted his ratings following the annexation of Crimea in 2014. During the previous two years of 2020 and 2021 his ratings wavered between 61% and 69% but only crossed into the 70%-plus range as the rhetoric with the West went up a notch at the start of the crisis at the beginning of 2022.

The Duma has done the least well and remains an object of disinterest or even contempt for most Russians (chart). Almost half of Russians disapproved of the Duma in February (49%), with only 47% supporting it and 4% undecided.

That flipped in March after the war started when 59% (36%, 5%) approved of the Duma, but its rating has remained largely unchanged since then to finish the year with a 57% (37%, 6%) approval rating in December.

The one place where enthusiasm for the war does not show up is in the poll of those that think Russia is going in the “right direction”. In February 52% (38%, 10%) thought Russia was going in the right direction, but that jumped to 69% (22%, 9%) in March after the hostilities began.

From there most Russians took a "wait and see" approach over the summer, with those believing Russia was going in the right direction remaining at 68% over the summer (chart). However, that support crumpled to 60% (27%, 12%) in September after the start of Ukraine’s counter-offensive. Since then, support has been less solid, with those that think Russia is going in the right direction wavering between 61% and 64% and ended the year in December at 63% (24%, 13%).

While many commentators had speculated that the hardship caused by sanctions could spur the Russian population into mass protests that will oust Putin and his entourage, the opposite has happened. The desire to protest has actually fallen about 10pp since the war began.

The propensity to protest with political demands was 29% in February this year, with another 18% saying they would personally take part in those protests should they happen (chart). But that fell to 16% and 9% respectively by the next poll in May. August and November, the subsequent polls saw similar results where the propensity to protest was 17% and only 10-11% saying they would participate.

The story with the propensity to protest with economic demands is very similar: 29% thought that economic protests were possible in February, but that fell to 17%, 20% and 17% in the next polls in May, August and November respectively. Those that said they would participate if protests happened were 14%, 16% and 15% respectively. (chart)

The reason for the low support for protests could partly be blamed by the repressive crackdown on the opposition and harsh laws that have been introduced to control the dialogue within the country. Criticising the war, or indeed even calling it a “war”, now carries long prison sentences. Spending on domestic security in the 2022-2025 federal budget has been hugely increased and is on a par with military spending, which suggests that the Kremlin would move rapidly to break up any domestic anti-war protests and jail those involved.