RIMMER: Peker has him in his pocket 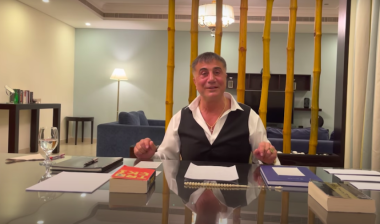 Turkey's one-time mafia boss turned YouTuber Sedat Peker, known as “The Botox”, has been dishing the dirt on corrupt going-ons in the Erdogan administration for a month and has transfixed the country. / Screengrab.
By Julian Rimmer in London June 3, 2021

He has been to Turkey like phylloxera to the vine. Now, though, there’s a paradigm shift afoot in Turkish politics and at long last we have The Tinpot Tyrant Takedown. His time is up and Turkish President Recep Tayyip Erdogan’s Islamofascist era has ended—but it’s a revolution in instalments and we haven’t seen the final episode yet.

Succeeding where Turkey’s political opposition failed is an unlikely revolutionary. The hair is combed low on the forehead. The dress code is gangsta bling. He’s fatter than Gandhi, less photogenic than Che and lags a long way behind Trotsky for intellect. No man in history ever looked in the mirror and saw a dishonest face reflected but there must have been moments when Turkey’s most notorious mafia boss had his doubts. Speaking to camera, he gives the impression of being half-stoned or in the exuberant stage of drunkenness. Viewers claim his monologues are more easily interpretable if one adjusts the playback speed to 1.5 times faster than normal.

For the past month or so, Sedat Peker’s deliberately provocative but inadvertently ludic YouTube vlogs have gripped the Turkish public in a way the soporific, state-controlled media churning out AKP propaganda, religious pabulum and soap operas of world-beating awfulness simply can’t compete. Upwards of fifteen million Turks are tuning into Peker’s broadcasts like they’re the Who-Shot-JR? finale of Dallas.

Today, when Peker announced he was delaying this weekend’s show, it made an even bigger splash. He’s made eight productions so far, closing in on the Fast and The Furious franchise, with another now scheduled for release on or after June 14th. This coincides with the Nato summit in Brussels where Joe Biden will meet Erdogan for the first time as president and, as my kids would say, those two have beef. The latter cannot afford a diplomatic humiliation if Peker is still singing like a deranged canary. The timing betrays a cunning, more murine than vulpine, and will extract maximum leverage.

The accusations levelled against the ruling AKP, Erdogan acolytes, the MHP, the military and the police are as lurid as they are comprehensive as they are shocking. They feature drugs, murder, corruption and even rape and have implicated several of Erdogan’s staunchest allies from whom he will find it impossible to disassociate himself. Allegations against not one but two of his interior ministers and his last prime minister are so copious and well-detailed that they smack of veracity and are not easily batted away.

This is what happens when you take over control of all media and serve the punters an unvarying diet of meretricious pap. They turn off the telly and turn on YouTube. If you rank 153rd among 180 countries in the World Press Freedom Index, no wonder no one watches your ‘news’ anymore.

Erdogan has proven invulnerable to head-on assaults from the domestic opposition. His polarisation of the electorate, his brutal suppression of political adversaries and his throttling of the liberal, secular media have rendered him unassailable at the ballot box for two decades. Dictators, though, are seldom brought down by conventional rivals. They are most vulnerable to inside jobs, fatally weakened from within, outflanked from the right when internecine feuding becomes impossible to manage and the turf wars of supporting groups boil over into vicious infighting.

Peker’s YouTube exposés illustrate clearly that Erdogan’s economic mismanagement means there are no longer sufficient resources to keep all cronies content. The number of snouts has not diminished but the trough is empty. This may well inform Erdogan’s quixotic/bat$hit-crazy project to build the Neronian folly that is Kanal Istanbul in the face of overwhelming opposition and investment logic.

For several years now, Erdogan has been dependent upon the nationalist MHP to secure a parliamentary majority and this means satisfying the demands of the Deep State. Orwell wrote that “every joke is a tiny revolution” but the tiny, attempted coup of 2016 was a joke and the Deep State saved Erdogan then. I doubt they will now. The MHP polls in single-digits and it’s questionable whether they want to hitch their wagon to the AKP anymore, given the latter is sinking towards just a quarter of voters. This is what the endgame looks like.

Thus far Peker has avoided implicating Erdogan directly in his litany of high crimes and misdemeanours but the flames are licking around his ankles, threatening to engulf him and Peker teased to speak freely about ‘Erdo Abi’ in his next release. Turks wait, breathly-bated. Who knows what is the quid pro quo demanded by this self-confessed, ex-jailbird mafioso for his silence? Erdogan is about to find out. There is honour among thieves and Peker obviously feels wronged by those close to the apex of power. Erdogan can either placate Peker—by sacrificing his own—or try to silence him but this is easier said than done when he’s holed up in a (naff) Dubai apartment and evidently under the protection of powerful elements.

Links to organised crime notwithstanding, Erdogan’s present vulnerability lies in an economic crisis all of his own devising. His traditional supporters have turned against him not because it appears he consorts with bandits like Peker but because, instead of bread and circuses, he’s offering canals and mosques. His core constituency holds him (rightly) culpable for high inflation and high interest rates (don’t get him started on that), the swooning currency and the omnishambles that has been his government’s pandemic response. The 2021 tourist season, like last year’s, looks like a washout.

This week, Erdogan inaugurated a new, 4,000-capacity mosque, yet another monument to colossal naivety, in Taksim Square, Istanbul. While bars and nightclubs (and anywhere you can enjoy yourself) remain closed there are now 82,693 places where Turks can humbly genuflect and offer grateful thanks for their immiseration by the self-appointed, temporal Sultan who threatened to rule forever. Erdogan should lay down a rug, face Mecca and pray for deliverance. His prayers, like everyone else’s, will go unanswered. Peker has Erdogan’s pecker in his pocket.

Julian Rimmer is a London-based broker who has been working in and covering the Emerging Europe markets for several decades.

Russia catches a nasty dose of the Dutch Disease

Turks are rightly proud of the success of Bayraktar drones in the conflict in Ukraine and Ukraine was grateful, but now they are not so sure as Turkish President Recep Tayyip Erdogan plays both side of the fence.

NEMETHY: Is the US Fed playing with the wrong levers?

Many economists are of the opinion that the US Fed has had a pretty abysmal track record in forecasting inflation during past years. It first deliberately changed policy to allow inflation to run hot at higher than 2%, but now it's too high.

ASH: Turkey playing a delicate balancing act between Ukraine, Russia and NATO
1 day ago
HESS: West wins the default battle but the economic war must go on
2 days ago
NEMETHY: Is the US Fed playing with the wrong levers?
2 days ago
Ukraine has been clear that it needs more weapons from the West. So, what’s the holdup?
5 days ago
COMMENT: Why replenished ties between Uzbekistan and Turkey suit both Tashkent and Ankara
6 days ago