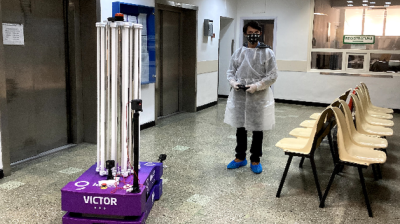 Romanian company Modulab is ready to deliver robots able to kill pathogenic microorganisms including coronavirus (COVID-19) using UV-C radiation, announced the European Bank for Reconstruction and Development (EBRD), which has helped the company optimise the production process under the European Union Horizon 2020 programme.

The company initially designed an autonomous robot for more mundane, industrial scenarios such as cleaning or carrying spare parts. As the coronavirus pandemic gripped the world in March, Modulab redesigned the robot and accelerated its development in order to give hospitals in Romania a much-needed weapon against the virus.

By adding powerful ultraviolet C-lamps to the robotic platform, the company created a device that can disinfect an area of 20 m2 in around 10 minutes, including clothing and equipment – everything that the ultraviolet light can reach. Due to its five-hour autonomy and remote control feature, the robot has the advantage of being able to move around without involving hospital personnel, thereby protecting human life.

The EBRD helped the company work with a Romanian consultant, Advanced Thinking, to optimise operations, standardise processes and scale-up production. By the end of the advisory project, the company had achieved an impressive reduction in robot assembly time.

“[O]ur robot has received the CE marking, and now we need to streamline production in order to meet increasing demand all around the world,” said Ioana Calen-Popescu, Modulab co-owner and CEO.

Daily new coronavirus cases in Romania topped the 4,000 mark last week, and the real number of new infections is believed to be considerably higher. The capital Bucharest has been placed in the “red scenario” with COVID-19 infections passing three persons infected per 1,000 inhabitants over a rolling 14-day period. Two counties, Alba and Valcea, are close to entering the red scenario as well.