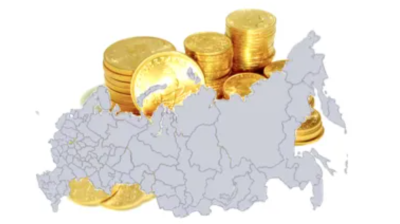 Dsight, a Moscow-based business intelligence company with a focus on investment, has just released the English version of its yearly Russian venture report.

The trends are disappointing, with a 20% contraction of total investment volume – from $869mn in 2019 to $702.8mn in 2020. Dsight attributes this fall to the “unpredictability of the pandemic” and “investors’ risk aversion,” reports East-West Digital News (EWDN).

The number of deals, however, grew noticeably last year (up 14% from 2019), essentially at the start-up and growth stages and mostly in the second half of the year, after the end of the first wave of the pandemic.

In sectoral terms, VC investment went mostly to e-commerce, entertainment and healthcare. Edtech, agrotech and fintech seem to be taking off, accounting for small values but showing spectacular growth rates.

Corporations and corporate funds increased noticeably their venture activity in both number of deals (47 vs 31 in 2019) and invested volume ($308mn vs. $191mn). Angel investing grew (64 identified deals, up from 77), while accelerators were involved in just 35 deals (down from 64 in 2019).

The level of involvement of foreign investors in the Russian venture remained appallingly low last year (putting aside a spectacular US pre-IPO investment in Ozon in March 2020). Dsight notes that the number of deals with foreign participants grew – from 18 in 2019 to 24 in 2020 – but the value of these deals fell from $232mn to $103mn year on year.

The reality is probably even worse, since the Dsight study covers deals involving some Russian-founded start-ups that now operate in other jurisdictions (typically the US and Western Europe). Thus disturbingly, this Russia VC report refers to such companies as British Arrival, Californian Miro or Polish Novakid without even distinguishing them from ‘truly Russian’ start-ups.

Nevertheless, the report offers a variety of interesting facts and figures, including an analysis of VC activity in the capital. Moscow City accounts for as much as 76% of Russia’s VC investment in value and 56% in number of deals.

The report also includes inputs from such companies as DS Law, iFarm and Kaspersky, as well as a contribution from CrunchBase about international venture trends. 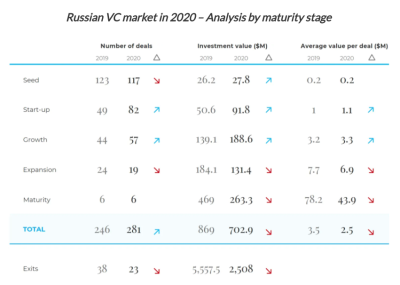 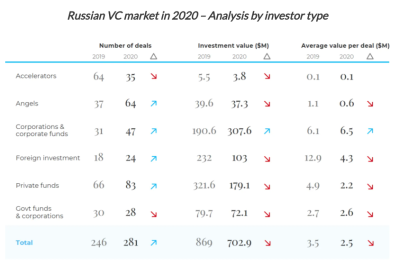 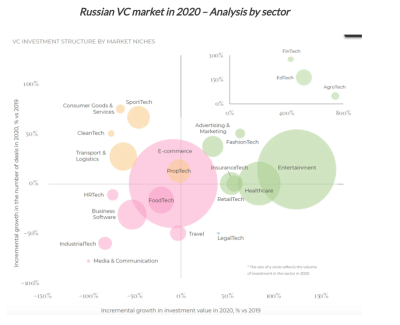 This article first appeared in East-West Digital News, a partner of bne IntelliNews

FPRI BMB Ukraine: How well could Ukraine defend itself against a Russian attack?
Unbundled: the Gas Transmission System Operator of Ukraine
Team Navalny pulls the trigger on the next big demonstration scheduled for April 21