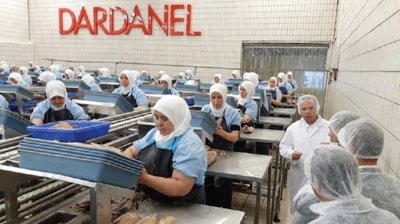 Lawyers and unions say the quarantined work plan drawn up by Dardanel is unlawful.
By Akin Nazli in Belgrade July 29, 2020

A Turkish canned food and sandwich maker’s plans to maintain production by keeping all workers under a coronavirus (COVID-19) quarantine on its premises for 14 days amount to holding employees “captive”, the head of a labour union has complained.

Dardanel, a manufacturer located in Turkey’s northwestern Canakkale province on the Dardanelles strait, notified investors of its approach to keeping its factory in operation in a July 27 stock exchange filing.

All employees would be kept under observation even during off-work hours in a “closed circuit working system,” the company said, prompting Seyit Aslan, head of labour union Gida-Is, to protest to bianet: “Dardanel workers are being held captive.”

More than 40 Dardanel workers have tested positive for COVID-19 across the past 15 days, according to Aslan, who added that the so-called “closed circuit working system” was not legal under any law and amounted to “inhumane treatment.”

Dardanel “workers are in fear and trembling,” he claimed.

Murat Ozveri, a lawyer, agreed with Aslan in telling daily Birgun that Dardanel’s “practice is against any kind of law”.

The union also referred to scandalous plans to turn “medium-sized industrial zones” into “isolated production bases” amid the pandemic, which were suggested by Islamist union for businessmen MUSIAD, and to proposed social distancing electronic tracking devices that would be hung around the necks of workers, as recommended by the Turkish Metal Industrialists’ Union (MESS).

The statement on plans for continued work under quarantine was interpreted by local media as a confirmation of reports that some Dardanel workers had tested positive for COVID-19, Hurriyet Daily News reported.

“According to a decision by the Public Hygiene Board of the governor’s office in Canakkale, employees at the Dardanel factory have been put under quarantine,” hometown daily Kalem reported.

All workers would remain in company barracks within the factory complex between July 26 and August 9, the daily, added, quoting from an e-mail sent to the employees.

“All annual leave has been suspended. Unless an official medical report is handed in, all personnel are obliged to come to work. To counter the possibility of COVID-19 contraction through contact, previous isolation decisions for individuals have been lifted with the new enforcement, and they have been put under managed quarantine,” the e-mail read.

Those employees violating the decision of the Public Hygiene Board stand to be fined Turkish lira (TRY) 3,150 ($460). They would be brought to the factory by law enforcement officers, the communication also said.

Dardanel informed workers that all accommodation, food and service costs would be covered by the company for two weeks. It urged employees to bring personal belongings, such as clothes and towels, to their work digs.

A worker currently working at Dardanel under quarantine told local news portal sol Haber on July 29 that one worker had just learnt the result of his COVID-19 test and he was positive.

Around 1,000 workers were present at the Dardanel plant under quarantine, according to local media reports.

Founded in 1984, Dardanel was Turkey’s first canned tuna fish producer. From the 1990s, its product range expanded from “Dardanel Ton” canned tuna to other canned foods and ready-made sandwiches. It has been listed on the Borsa Istanbul since 1994.

Dardanel CEO Mehmet Onen said in April that the company’s sales tripled during the pandemic period, driving the company to increase production capacity by 50% and expand the workforce 30%.

The Turkish government has appeared determined to act as if everything is pretty much normal despite the spread of the coronavirus, but Turkey’s top medical association TTB and related bodies have issued warnings that there is no evidence that even the first wave of the virus outbreak in the country has been defeated.

Medical bodies pinpoint June 1, a day on which in their eyes Turkey lifted COVID-19 restrictions largely for the sake of economic revival, as a critical date. After June 1, the state shifted its focus from the fight against the pandemic, with the government leaving it to citizens to take personal responsibility for adopting measures that shield against the virus.

Not all of Turkey's social distancing measures are working out...

Official data on COVID-19 cases worldwide are available on the Johns Hopkins University’s website, but the statistics fed into it are subject to some disbelief. For instance, it shows that there are more COVID-19 infections in Qatar than in China. The data flowing from the Turkish government, meanwhile, prompts a good deal of derision. Some of its ratios never change.

Top TTB officials have lately described problems in the face of the pandemic in Turkey that particularly refer to Turkey’s southeastern provinces and observed rises in COVID-19 cases.

A COVID-19 patient in the southeastern Diyarbakir province died after an available intensive care bed could not be found either in Diyarbakir city or four surrounding provinces, bianet reported on July 27.

At the end of June, government-run news service Anadolu Agency reported that four Turkish MPs—one from the ruling AKP party and three from the pro-Kurdish HDP—were diagnosed as having COVID-19 infections.

The parliament was closed from June 25 to June 30 after personnel in different departments of the legislature contracted COVID-19. However, it was re-opened on June 30. It has since approved a raft of controversial laws prior to leaving on July 29 for a summer holiday that lasts until October 1.

Notably, the AKP group deputy chairman Muhammet Emin Dundar, the MP in the party who was diagnosed with COVID-19, attended the June 30 gathering at parliament.

On July 29, Huseyin Sanverdi, another AKP MP, wrote on Twitter that he had tested positive for COVID-19. Sanverdi on July 24 attended the controversial first Friday prayer held at Hagia Sophia since the 1930s following its recent re-conversion into a mosque, bianet reported.

The government, meanwhile, is getting ready to re-open Turkey’s schools on August 31.