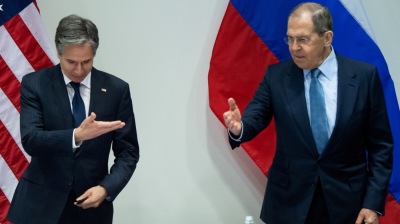 The US has delivered its written reply and rejected Russia's key No Nato Expansion demand. However, the US State Department has held the door open for more talks. / wiki
By bne IntelliNews January 27, 2022

The US State Department has rejected Russia’s demands for a freeze on Nato’s expansion to the east in a highly anticipated written response to Russia’s December eight-point list of demands delivered on January 26.

One the same day, top diplomats from the Normandy Four group – France, Germany, Ukraine and Russia – held a marathon eight-hour meeting in Paris to try to unblock the peace process that was designed to end the undeclared war in Donbas. The meeting was the first time the group had met since December 2019, and reported positive results but little actual progress.

Russia and the West have been locked in a tense round of diplomatic meetings that started in Geneva with a meeting on January 10 between US Deputy Secretary Wendy Sherman and Russian Deputy Foreign Minister Sergei Ryabkov and concluded back in Geneva on January 15 with a meeting between US Secretary of State Antony Blinken and his counterpart, Russian Foreign Minister Sergei Lavrov.

The US has indicated that it is willing to negotiate on many of the points on the list, but while the details of the letter were not made public, Blinken indicated in comments that the US has rejected Russia’s key demand on providing “legal guarantees” that Nato will not expand further to the east. Russia has made it clear that a possible inclusion of Ukraine into the military alliance is a “red line” for Russian President Vladimir Putin.

Blinken said the letter has made no concessions but said that he was offering Russia "a serious diplomatic path forward, should Russia choose it," the BBC reports.

Blinken went on to make explicit that the US response made it clear that it was sticking to its "core principles," including unpinning Ukraine's sovereignty and its “right to choose to be part of security alliances such as Nato.”

"There should be no doubt about our seriousness of purpose when it comes to diplomacy, and we're acting with equal focus and force to bolster Ukraine's defences and prepare a swift united response to further Russian aggression," he said.

"It remains up to Russia to decide how to respond," he added. "We're ready either way."

The Kremlin has made it clear that without a willingness on the US side to discuss a ban on further Nato expansion it was not prepared to discuss any of the other issues on the list, as they come as a “package.” It has also said if the talks fail it would respond with “military/technical” means.

Fears of a possible invasion of Ukraine by Russia have soared in recent days but as bne IntelliNews has reported, the possibility of a full-scale invasion of Ukraine remains highly unlikely. Even Ukraine’s military analysts are not expecting a large-scale military attack, according to a report released by the respected Kyiv-based Center for Defense Strategies this week. However, that does not preclude limited or smaller-scale military action or other acts to destabilise Ukraine on Russia’s part to keep the pressure on the West.

Russia has brought some 100,000 troops up to bases close to Ukraine since October last year in a move that unsettled the West. More recently, it has begun preparations for an unscheduled large-scale military exercise in Belarus, which threatens a northern invasion of Ukraine pointed at Kyiv, and this week also launched more large-scale exercises in Russia close to the Ukrainian border.

The US and the EU have both warned that there will be “massive consequences” should Russia attack Ukraine, although in the last week cracks have appeared between the western allies on exactly what sanctions should be applied should hostilities break out.

In anticipation of a possible outbreak of war Ukraine’s western partners have been flying in hundreds of millions of dollars of weapons to Ukraine in the last week. The US alone delivered over 80 tonnes of arms and ammunition at the weekend worth over $200mn that also contained 300 “tank-busting” Javelin missiles that would be key to countering a ground-based assault by Russia on Ukraine over its western border.

Nato also delivered a letter on the Russian demands to the Russian Foreign Ministry on the same day, despite no request from Russia for a Nato response. Nato Secretary-General Jens Stoltenberg said that while he was willing to listen to Russia's concerns, all nations had the right to choose their own security arrangements.

Russian Foreign Minister Sergei Lavrov was dismissive of Nato’s communiqué, adding that Stoltenberg had "lost touch with reality", when asked about Nato boosting its presence near Russia's borders. Russia broke off diplomatic relations with Nato on October 19.

"You know, I stopped taking any view of his statements a long time ago," Mr Lavrov told the press in the Russian parliament, which were broadcast live on social media as cited by the BBC.

The classified nature of the US letter suggests that the White House is holding the door open for a few more rounds of diplomacy now the Kremlin has got its answer.

Blinken said the document contains Washington’s own set of proposals, which "fully reinforces [our stance] and vice versa… Diplomacy has the best chance to succeed if we provide space for confidential talks," the Secretary of State added.

Analysts are expecting the Kremlin to turn the heat up a notch again following the US rejection of the key No Nato point, and the crisis could escalate from here.

It remains unclear what the Kremlin will do next, but cyberattacks, missile deployments, or a squeeze on transport lanes in the Black Sea are all possibilities. Russia currently has a naval force steaming from the Baltic Sea on its way to more unscheduled naval exercises in the Black Sea, and it is due to arrive at the end of this week.

The two top diplomats have also suggested that there could be another Putin-Biden summit to break the deadlock. Biden has made it clear that he wants to ratchet down tensions with Russia to clear the field so that he can concentrate on his domestic agenda and meet the challenge of a rising China. He has also made it plain that he has common ground with Putin on issues like restarting arms control talks and fighting international cybercrime.

In a positive signal Russia arrested the members of the notorious REvil ransomware gang last week and will extradite any member that doesn't have a Russian passport to the US to stand trial for extorting hundreds of millions of dollars. The Russian constitution bans the extradition of its own citizens.

In parallel with the US-Russian talks over Nato enlargement, one of the positive developments to emerge from the current crisis has been the resumption of the Normandy Four talks.

Delegates met in Paris on January 25 for a marathon eight-hour session to try to get the wheels of the stalled Minsk II agreement moving again. This was the first time the group has met since the December 2019 talks in Paris, which were also the first face-to-face meeting between Putin and Ukrainian President Volodymyr Zelenskiy.

While the Paris talks produced some progress, the follow-through promises from that meeting were never fulfilled and the second meeting scheduled for April 2020 never happened.

This week the talks focused on the Minsk II proposal that the Donbas be given a semi-autonomous status in Ukraine’s constitution, something that Kyiv agreed to in the Minsk II protocols but has not implemented, as it remains highly controversial amongst Ukrainians. The Kremlin is keen on this provision, as it hands Russia a mechanism to prevent Ukraine from ever joining Nato: any Nato membership decisions would have to be put to the vote and a Donbas that remains under the influence of Russia could veto any accession vote.

Moscow has complained heavily that no progress has been made on implementing the change of status of Donbas, but the Ukrainian side hinted that they may consider moving the issue forward.

The Kremlin's deputy chief of staff Dmitri Kozak, who is in charge of dealing with the Donbas issue and leads the delegations, characterised the eight-hour talks in Paris as "not simple", and the group is due to meet again in two weeks in Berlin.