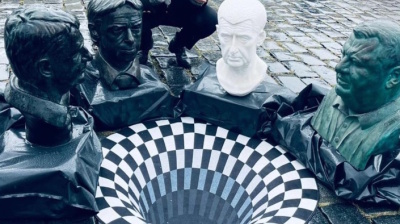 The four men represent politicians and lobbyists who have been accused of some of the most blatant cases of abuse of power and systematic corruption at the Prague municipality and Czech government. None have ever been found guilty of corruption.

The art happening was backed by the Solidarity coalition of Social Democrats, Greens, Future and Idealists, which runs in the upcoming weekend municipal election on a joint list led by former dissident and former ombudsman Anna Sabatova.

Solidarity as well as the independent grassroots party Praha Sobe (Praguers for themselves) and the Pirates have been warning against the prospect of Babis' populist ANO and the rightwing ODS forming a coalition in Prague, by far the country’s largest city of close to 1.5mn, accounting for about one quarter of the country’s GDP.

Prague, which has been ruled by the  ODS of current premier Petr Fiala for most of the past three decades, has become notorious for corruption, though few politicians have actually been convicted. The ODS has a long history of corruption, with all of its previous premiers resigning amid scandals. For its part, ANO always claimed to be an anti-corruption party and gained support from the ODS scandals, but  Babis himself is currently on trial on fraud charges.

The current ruling coalition of the Pirate Party, Praha Sobe, and the centre-right TOP09 and Mayors and Independents (STAN) parties faces a strong challenge from both the ODS and ANO in the September 23-24 municipal elections.

In 2020 a coalition of right-wing parties and ANO ousted the leadership at Prague 1 district, covering much of Prague’s historic city centre, after the then incumbent coalition led by Praha Sobe, Pirates and Greens attempted to crack down on the casino business in the city centre. The January public municipal session leading up to the ousting was reported to be attended by nightclub bouncers, some of them wearing Ku Klux Klan t-shirts and intimidating the public.

Praha Sobe leader Jan Cizinsky recently said that his goal is to cut off Prague of the influence of people behind the “Dozimetr” affair – a kickback scheme at the Prague Transporation Company which rocked the STAN party in the summer – where Praha Sobe politicians instigated a police investigation.