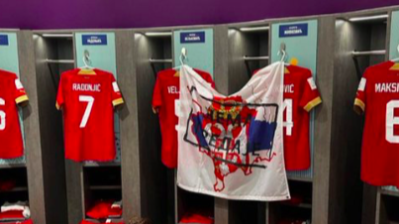 The flag shows a map of Serbia including Kosovo, which declared independence in 2008, with the caption “No Surrender”. / Twitter
By bne IntelliNews November 27, 2022

FIFA has opened disciplinary proceedings against Serbia over a political banner hung in the national football team’s locker ahead of Serbia’s World Cup match with Brazil.

The map showed a map of Serbia that included Kosovo, a former province that declared independence in 2008, and bore the caption “No Surrender”.

Photographs of the banner were widely circulated by the media, adding to the political tensions between Serbia and Kosovo, whose relations deteriorated recently due to a row over car number plates for Serbs living in Kosovo.

Photos showed the banner hanging over the lockers of footballers Milos Veljkovic and Andrija Zivkovic ahead of the match with Brazil on November 24, which Serbia lost 2:0.

The Football Federation of Kosovo (FFK), whose national team did not qualify for the World Cup, made a formal complaint to FIFA.

"We expect concrete actions from @FIFAcom considering that the @FFK_KS is a full FIFA and UEFA member."

The FFK then confirmed on November 27 that FIFA has formally accepted its complaint.

“We are happy to see the quick reaction of FIFA, on the occasion of the initiation of the investigation against the Football Association of Serbia after the display of the banner with the map of Kosovo with the Serbian flag inside it and with hateful and inciting messages in the dressing room of the Serbian representative and in the stadium, in the match between Brazil and Serbia, as part of the World Cup in Qatar,” a statement from the FFK said.

The timescale for FIFA’s decision on what action to take against Serbia is not clear.

Serbia’s national team will next play Cameroon on November 28, followed by its final group stage match against Switzerland on December 2.

Recent weeks have seen a serious escalation in tensions between Serbia and Kosovo, which EU High Commissioner Josep Borrell warned earlier in November could lead to another conflict.

However, the chief negotiators for Belgrade and Pristina reached an agreement on the bitter dispute over car number plates late on November 23, easing the crisis in northern Kosovo, which is mainly populated by Serbs.

Previously, Kosovo planned to start fining Serbs in the country who continued driving cars with the old neutral status KS plates, rather than switching to RKS plates. This sparked a mass walkout of state institutions by Kosovo Serbs as well as several protests in the volatile north of the country.

Kosovo unilaterally declared independence from Serbia in 2008, nine years after the 1998-99 war of independence in which around 13,000 people died. The war ended with the Nato bombing of Serbia in 1999.

While Kosovo is not universally recognised as independent, it was admitted into both FIFA and UEFA in 2016.