COMMENT: Fiscal challenge for Azerbaijan is to not spend the oil price boom

Some parliamentarians have already hinted at the “likelihood” of amending the 2022 budget. / President.az, cc-by-sa 4.0.
By Elmir Mukhtarov June 20, 2022

Fuelled by the Russian invasion of Ukraine, the price of Brent crude oil in the first five months of 2022 has averaged 103 USD per barrel. This is substantially above the 50 USD per barrel price which Azerbaijan’s policymakers used when drafting the state budget for 2022. With a sizable surplus in the budget of the State Oil Fund (SOFAZ), Azerbaijan’s fiscal policy faces another challenge.

Contrasting the fiscal challenges of previous years (such as 2015 and 2020), this one is fundamentally different. While the economic downturns and plunging oil prices resulted in adverse consequences like devaluation and larger-than-intended budget deficits before, those risks do not exist today. Instead, the challenge before us is whether Azerbaijan repeats the same blunders that it made in the 2010–2012 period when oil prices were above 100 USD per barrel. Unfortunately, some parliamentarians have already hinted at the “likelihood” of amending the budget of 2022[1], which concerns me greatly. Because it was those mistakes that led to the devaluation of 2015 and made the ensuing economic contraction inevitable.

Mistakes of the past

Throughout recent years, the Azerbaijani state budget has developed an unhealthy habit of being amended rather frequently. Since 2015, the budget has been amended four times[2].

One of the leading factors that affect Azerbaijan’s fiscal stance is naturally the oil price. When the difference between the oil price in the budget legislation (in other words, the price on which the calculations of the state budget were based – for the sake of simplicity I am going to call that the “legislation price”) and the actual oil price becomes wide, numerous problems arise.

Look at the graph and table below to see an overview of the past amendments[3]. 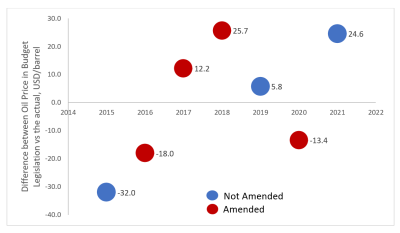 One point is evident when we look at the information above: Azerbaijan’s timeline of budgetary amendments certainly had no apparent fiscal objective in the past and has been exceptionally erratic. The amendments have been carried out haphazardly with little economic logic and justification. In some cases, the budget transfers increased significantly when the oil prices trended above the legislation amount (such as in 2018). The exact same thing also happened in the years when oil prices turned out to be lower than expected (such as in 2016 and 2020). In 2017 the budget was amended, but transfers from SOFAZ remained unchanged in spite of the higher oil prices. Instead, the additional expenditures were met by deficit financing. Conversely, the budget for 2021 was not amended at all, despite oil prices being 61% greater than the legislation price during the first six months of 2021. The Azerbaijani government’s response to large variations in oil prices has been all over the place in the past.

But then how do we support, for example, amendments in 2018? According to official statistics, the economy was growing at 1.3% (slower than usual, but not enough to rationalise massive over-spending). The state Budget had a surplus of 300 million AZN. Official inflation was at a healthy 3%. In this case, how can we possibly explain why the transfers from SOFAZ were heightened from the previous 9.2 billion AZN to 10.9 billion? What was the reason behind the aggressive expansionary fiscal policy, as the expenditures went from 21 billion to 23.1 billion AZN?

The challenge facing the Azerbaijani government today is straightforward: to persist amid the temptation of over-spending and follow the counter-cyclical fiscal policy. Azerbaijan’s economy needs no expansionary policies now as the statistics show real GDP growth of 7.2% in the first four months of the year. On the contrary, shrinking budget spending can help the country in combatting the current soaring inflation. What we need to do is clear: stick to the original budget plan, drafted upon the expected oil price of 50 USD per barrel. Any extra revenue generated due to high oil prices must be saved in the State Oil Fund, in line with its mission of preserving the oil wealth for the future generations of Azerbaijan. That means, not counting any technical changes, the budget should not be amended in 2022.

A lot of counterarguments can be brought against my case, such as the hefty cost of reconstructing the liberated lands, as well as the need to boost the social welfare of the population. Inasmuch as these arguments carry some value, we must remember one fact: the state budget of Azerbaijan in 2022 derives 47% of its revenues directly from transfers from the State Oil Fund. If there are going to be amendments (of which there has been lots of talk lately), it is ensured that those transfers will be bolstered greatly due to hiking oil prices. Suddenly, we can end up with a budget where 50-55% of revenues come from transfers and another 5-10% from taxation of oil companies. This effectively means going back to extremely dangerous oil dependency levels. In that case, all the reforms, policies, and actions taken since 2015 towards lessening the fiscal dependency on oil, such as the implementation of the fiscal rule and the shift towards a Medium Term Expenditures Framework are completely wasted. Even though the reconstruction of Karabakh and other causes are important for Azerbaijan, they cannot be used to justify the jeopardisation of the country’s long-term economic stability, prosperity and sustainability.

There is one simple sentence to briefly encapsulate all my arguments above: the most effective way to combat oil dependency is to spend less oil money. Azerbaijan’s oil production is steadily decreasing, and the proven gas reserves are not even close to compensating for the lost oil revenues. It is therefore imperative that we take utmost care when designing our fiscal policy now, because it may very well be the last time that Azerbaijan experiences high levels of revenues from the oil/gas sector. We are already spending a lot of oil money and (if amendments do take place) will be spending even more. This vicious cycle needs to stop before it is all too late.

[2] The State budget of 2019 was amended as well, but it was a minor/technical amendment. Thus, for the purpose of my arguments, I have not included the year 2019 as an amended budget.

[3] Information on amendments of pre-2015 years was incomplete hence I could not integrate them into the graph.

[4] Oil price difference = legislation price – the price of oil up until the amendment month (if amended) or the average price during the first half of the year (if not amended).

[5] When looking at the table, you may be puzzled as to why there were no amendments in 2015 despite the huge oil price plunge. There was no amendment in the Budget because, following the sharp devaluation of AZN against the USD, the value of transfers in national currency rose significantly (remember that SOFAZ transfers the money in USD to the Central Bank, which then exchanges it in currency auctions and supplies the State Budget with AZN equivalent).

[6] Also, the amendments in 2016 had to be carried out because the budget legislation itself was based on a ridiculously risky oil price scenario. By September of 2015, Goldman Sachs lowered its 2016 estimate as low as 49.5 USD per barrel. Other major investment banks and organszations also had similar figures. Despite all these forecasts, Azerbaijan’s State Budget included oil price at 50 USD per barrel.

Elmir Mukhtarov worked at Azerbaijan's Center for Economic and Social Development (CESD). He is currently studying at Princeton University, School of Public and International Affairs, for a Master of Public Affairs degree.

Turkish leader might be won round with economic lifeline that would persuade him to abandon Moscow, says Maximilian Hess.

Georgia can become an EU candidate country, but not with Georgian Dream in power.

A new book exposes the hollowness of many Western assumptions about China’s role in Central Asia.

Ukraine has been clear that it needs more weapons from the West. So, what’s the holdup?
1 day ago
COMMENT: Why replenished ties between Uzbekistan and Turkey suit both Tashkent and Ankara
2 days ago
Analyst says West should form ‘alliance of convenience’ with ‘unsavoury Erdogan’
3 days ago
COMMENT: Georgia drops out of the Trio – why did this happen?
4 days ago
Book review | China’s “detached” power
4 days ago