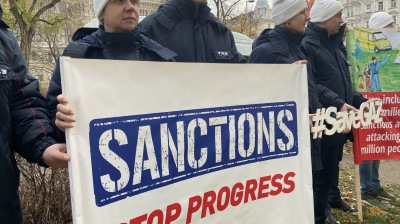 Ten GAZ workers on a 10 day road trip delivered protest letter to the US ambassador to highlight their plight
By Ben Aris in London December 5, 2019

The ten GAZ workers on a road trip across Europe to highlight the plight of Russia's second largest car plant arrived in Vienna on December 4 and delivered a letter to the US ambassador in the hope of rescuing their jobs.

“We have driven here from Nizhny Novgorod to raise awareness of the effect that the US sanctions have on normal people and the collateral damage that these sanctions are going to have on the lives of 40,000 workers,” said Yevgeny Morozov, the head of the GAZ trade union, who is leading the expedition. “If you include the families of the workers then the knock on effects will affect the whole population of Nizhny Novgorod.”

Five representatives from the group had walked a few hundred metres to the end of the cul de sac where the US embassy is located just outside of the centre of Vienna where they were met by two slightly bemused diplomats from embassy who accepted the letter and promised to deliver it to Ambassador Trevor Traina.

The group had arrived in the Austrian capital a few hours before in three Gazelle light vans, the famous Russian car factory’s most successful product, that are emblazoned with #SaveGAZ, on a two week road trip to Germany.

In the centre of town curious Austrians stopped them to ask what they were doing before the group moved on to lay flowers at the Soviet war memorial to the fallen in Vienna. They then drove their vans around to the hotel where the annual OPEC meeting is currently being held in the Austrian capital.

The group is an earnest collection of workers and engineers from the plant wearing their work uniform of heavy jackets and woollen hats that bear the company logo.

The stolid middle class of a Russian industrial town, the participants are worried about their future. While some of the US sanctions imposed on tycoon Oleg Deripaska last April have been removed, those on GAZ, which is one of his many holdings, remain in place. While the US Treasury Department (USTD) has delayed the application of the sanctions until March 31 next year the threat of sanctions has made it impossible for the factory to import parts from foreign partners and Deripaska says the business is threatened with bankruptcy.

That would be catastrophic for the workers, most of whom have spent their entire working life at the company.

“The US government says that the sanctions are not directed against ordinary people. But that is not true. Sanctions, if imposed, could lead to severe slumps in production and job cuts. Some 40,000 GAZ group employees could lose their jobs,” the letter to the US ambassador said. “Altogether the sanctions could touch the lives of over a million people.”

“It’s a question of stabilnosti,” Sergei Pankov told a bne IntelliNews reporter that is travelling with the group. The Russian word that literally translates into English as “stability” has many more connotations for Russians. It stands in contrast to the chaos that marred the Yeltsin years in the 90s. It also alludes the fact that many workers at GAZ studied at the GAZ institute as students and have prepared their whole lives to work for the plant. And the job is more than a 9 to 5 as their children go to the company kindergarten, their families are treated at the GAZ polyclinic, and holidays are taken at the GAZ sanatoria. Although the centrally planned system collapsed in 1991, GAZ continues many popular aspects of the Soviet system, the cradle to grave care that was a hallmark of communism that so many Russians miss following the collapse of the Soviet Union.

And the workers are not just worried about the end of their job-related perks. The closure of GAZ would wreak havoc on the local economy in Nizhny Novgorod. "How will I feed my two children if the plant is closed?" asks Sergei Pankov, an engineer at the plant. The young blue-eyed Russian with typical buzz cut hair says his entire family has been working at GAZ for three generations. He is proud of the fact and clearly has an emotional attachment to the factory that was founded by Lenin himself shortly after the revolution in cooperation with the US automotive legend Henry Ford.

“We are the little guys that have got caught up in the politics of the big countries,” says Pankov, who is wearing a t-shirt carrying the slogan “sanctions stop progress”.

The sanctions have not yet been imposed, yet they hang over the entire city like the Sword of Damocles and for the middle class inhabitants of this blue collar city it's like a return to the vagrancies of the 90s.

“With all these delays, we have absolutely no idea what will happen to us tomorrow. The plant for us is more than just a place where we earn our living. It gives us opportunities for training and development,” says Morozov. “GAZ Group has strong professional development programmes for workers and students. Many of our parents, brothers and sisters work at GAZ plants, many of our grandparents used to work there. If the plants close down, we will lose everything… Will Americans feel happier if this comes to pass? We, as ordinary workers, are not part of politics in any way. It is an absurd mistake and injustice that our factories fall under sanctions.”

The group has already moved on and arrived in southern Germany on December 5 on their way to Duren where they will be greeted by German automotive union members next week.

DATACRUNCH: the bne car ownership/age index
14 hours ago
Money laundering pushes up property prices in Western Balkan cities
1 day ago
LONG READ: The first thing the emerging middle classes of New Europe do is buy a better car
2 days ago
Russia’s oil and gas reserves will last for another 59 and 103 years respectively, says natural resources minister
2 days ago
Mongolia’s apocalyptic sandstorms
4 days ago