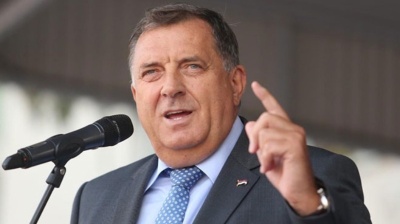 The Serb member of Bosnia & Herzegovina’s tripartite presidency, Milorad Dodik, attended the St. Petersburg International Economic Forum (SPIEF 2022) on June 16, as did a senior government official from Serbia, Minister without portfolio in charge of innovation and technological development Nenad Popovic.

Most years, political and business leaders from around the world attend the forum, dubbed ‘Russia’s Davos’. This year, however, amid sanctions on Russia following its invasion of Ukraine, Western leaders are steering clear, as reported by bne IntelliNews.

Serbia has resisted pressure from the West to join EU sanctions against Russia following the invasion of Ukraine, despite being an aspiring member of the bloc. It is now one of the few European countries not to have imposed sanctions, despite top officials condemning the invasion.

In Bosnia, Dodik, who has cultivated relations with Moscow and speaks in glowing terms of Russian President Vladimir Putin, has sought to block the country from joining the sanctions.

In St Peterburg, Dodik met Russia’s Foreign Minister Sergei Lavrov. The pro-Russian Serb leader said that he would not allow Bosnia to join the sanctions against Russia. Moreover, he took the Russian side in the war that Moscow started in Ukraine.

“The conflict in Ukraine is being waged to the last soldier, all in order to weaken Russia and take control of its resources [by the West],” Dodik said as quoted by N1.

He added that the world today has only three true leaders, the presidents of Russia, China and Turkey – Vladimir Putin, Xi Jinping and Recep Tayyip Erdogan. Dodik is set to meet Putin on June 17.

Meanwhile, ministers from Russia and Serbia said on June 16 that their governments will make “maximum efforts” to ensure trade between the two countries continues, unhindered by international sanctions, a statement from the Serbian government said.

Popovic held a bilateral meeting with Russia’s Deputy Prime Minister Yuri Borisov, the other co-head of the Intergovernmental Committee for Cooperation between Serbia and Russia. The governments of the two countries agreed to make “maximum efforts to enable uninterrupted bilateral trade in the current political crisis in Europe”, the government in Belgrade said.

Since the sanctions were imposed, exporters of fruits, vegetables and food products in particular have experienced problems transporting their goods.

According to the Serbian government, trade between the two countries amounted to approximately $2.8bn, up 13.1% compared to 2020.

Serbia's exports to Russia amounted to nearly $1bn, and the value of imports from Russia to Serbia was $1.8bn. This has resulted in Russia becoming Serbia's fourth foreign trade partner.

SPIEF, set up as Russia’s answer to the World Economic Forum (WEF) in Davos, has been held annually for the last 25 years.

It was launched with the intention of attracting investment and business to Russia following the collapse of the Soviet Union. In 2004, Vladimir Putin gave the opening speech at the Forum, and it has been traditional for the president to attend ever since.

In past years, guests have included Chinese premier Xi Jinping, French president Emmanuel Macron and UN Secretary-General Antonio Guterres. However, few such high profile guests were present in 2022, and the number of attendees expected this year is less than a quarter of last year’s 13,500. Only 90 countries are attending, down from 140 last year.