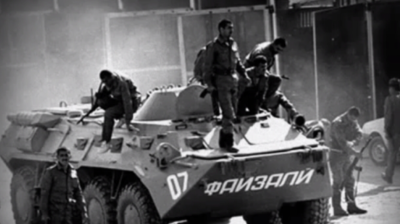 Many Pamiris in eastern Tajikistan are living in fear of a return to the violent conflict of the 1992-1997 Tajik civil war that claimed the lives of tens of thousands, the UN Special Rapporteur on minority issues has warned.

Fernand de Varennes issued the chilling warning as on May 20 he urged Tajikistan to end its deadly crackdown against the Pamiri minority in the Gorno-Badakhshan Autonomous Region (GBAO), saying that the use of counter-terrorism operations to quell protests could fuel even wider and more violent trouble.

“As I and my colleagues stressed, a violent conflict can indeed happen should disregard of the Pamiri minority grievances by Tajik authorities and the securitization of the Gorno-Badakhshan autonomous region remain unaddressed,” he said. “I reiterate: Tajik authorities must act now before it is too late.”

Officials said eight protesters and one policeman were killed during an operation on May 18—but local media have reported local inhabitants as saying the death toll was substantially higher and UN officials have cited reliable sources as saying it was as high as 40.

“The Government’s heavy-handed response to end protests by the Pamiri minority through arrests, the excessive and unlawful use of force, and the involvement of the military is disproportionate and deeply disturbing,” de Varennes said. “I call on all sides to exercise restraint, and to ensure this doesn’t spiral out of control.”

On May 22, Eurasianet reported that a Pamiri leader, Mamadbokir Mamadbokirov, may have been killed by a Tajik armed forces sniper. The interior ministry has claimed he died during a violent dispute among his own men.

De Varennes called on the authorities to engage in constructive and open dialogue with the Pamiri minority and immediately implement conflict-prevention measures that meet international human rights standards, including the protection of the Pamiri minority.

Military forces were sent by the government into GBAO as part of what was described as an anti-terrorism operation. Roads, schools, shops and the internet were closed. The security crackdown was targeted at Rushon district.

De Varennes expressed regret that earlier warnings of violence expressed by a group of UN experts including himself, along with recommendations to avert an escalation in trouble, were not heeded. “Sadly, the Government of Tajikistan didn’t respond to our letter and tensions that flared in the GBAO in November 2021 have continued on a larger and more dangerous scale,” he said.

Pamiris took to the streets of Khorog on May 16 demanding the prosecution of those responsible for Ziyobekov’s killing, and called for the release of GBAO residents who remained in custody following subsequent demonstrations.

Authorities said the protests were “unlawful” and undermined the safety of the country.

De Varennes said that, like in November 2021, the media has been forced into censoring news about events that have taken place in GBAO. “Many journalists, including several in Dushanbe, have allegedly been threatened or assaulted for reporting on developments in the GBAO,” the expert said.